This is the second in a Nikkei Asia series on supply chain nightmares that began with Apple’s nightmare before Christmas, a look at how the crisis finally reached the maker of the iPhone.

TOKYO — The “just-in-time” manufacturing process enshrined by Kiichiro Toyoda, founder of Toyota Motor, has been tested in the car industry this year as never before.

Its essence, the “absolute elimination of waste” in stockpiles, overproduction and unused labor hours in every manufacturing layer, has become the norm for every automaker. A superefficient supply chain network spans the globe to build tens of millions of cars annually, consisting of about 30,000 parts.

But COVID-19 has revealed vulnerabilities throughout the chain, suggesting that executives — including Akio Toyoda, president of Toyota and grandson of Kiichiro Toyoda — have unwittingly traded resilience for low costs.

An estimated 7.7 million units of vehicle production will be lost in 2021 because carmakers haven’t been able to secure semiconductors, according to AlixPartners, a U.S. consultancy, costing the industry $210 billion in revenue — nearly equivalent to Toyota’s annual sales last year. And disruptions have extended beyond chips to other parts and to assembly, while surges in raw materials prices have become common.

As manufacturers race to ramp production back up again ahead of the end of the year, the longer-term lessons of a grueling year are only beginning to be debated.

“My goal always is, from a supply-chain standpoint, to be invisible to the company,” Chris Styles, vice president of supply chain management for Nissan North America, told an industry conference in October. “If everything is going the way it should, we should be invisible … and right now, we are the opposite of invisible.” The urgent task for executives at an auto company “is to rethink its supply chain network and make it more resilient,” said Toshiyuki Shiga, a former Nissan Motor executive who now chairs Japanese state-backed investment fund INCJ, whose investments include chipmaker Renesas Electronics and Japan Display, an Apple supplier. “The industry has to shift more toward a ‘just-in-case’ mentality.”

Shiga was the chief operating officer of Nissan when the devastating 2011 earthquake and tsunami hit the industry, causing production strains for months in Japan. From that lesson, and to cope with a historically high yen, the Japanese auto industry stretched its supply chain further into Asia. Toyota even started stockpiling some key components. “But apparently, that was not enough,” he said.

The pandemic has buffeted the auto industry almost since its first emergence, creating a nonstop chain reaction of disorder. Manufacturing plants of several major carmakers and their parts suppliers crowd together in the Chinese city of Wuhan, the COVID epicenter. Honda Motor, which has major factories there, was abruptly forced to halt production. As the virus spread in early 2020 across China, the world’s largest auto market, other car factories throughout the nation stopped, and it eventually brought similar halts in Europe and even in little-affected countries such as Japan when demand plunged.

When demand rebounded unexpectedly swiftly, a different problem emerged: shortages of semiconductors. Chip fabrication facilities like those of Taiwan Semiconductor Manufacturing Co. did not have enough capacity to allocate to the auto industry amid strong demand from other industries, including computers, gaming consoles and other consumer electronics. The COVID-19 outbreak in Wuhan, China, last year (left) quickly closed car plants in the city such as the one run by Dongfeng Honda (right). (Source photos by AP and Reuters)

And the COVID-19 restrictions in Southeast Asia from this summer dealt another heavy blow to carmakers, especially Japanese players that had built complex local supply chains. Semiconductor shipments from Malaysia, a global hub for chip assembly and testing, were suspended because workers could not commute to plants during that country’s lockdown, which began when the delta variant hit in June.

And it has not just been chips. Similar disruptions erupted in Vietnam, a production hub for wire harnesses and other automotive parts.

If semiconductors are the “brains” of a car — controlling everything from engines to air bags, windshield wipers and power windows — then wire harnesses function like its central nervous system, distributing electricity and information to systems and components.

Executives had thought they were getting ahead of a different problem by increasing wire harness production in Vietnam, according to analysts. “Manufacturers have been transferring production from China due to the U.S.-China trade conflicts, and there have been moves to use ASEAN-made wire harnesses for North America,” said Yuji Matsumoto, a Nomura Securities research analyst. Supplies of wiring and chips — the nervous system and the brains of modern cars — have been disrupted this year. (Source photos by Reuters and AFP/Jiji)

But shortages of such car cables added to vehicle production disruptions in September, which was when the mighty Toyota shocked the industry by announcing a 40% monthly global output cut.

The waves of crisis have left executives asking, what next?

The scramble for chips has nudged carmakers toward measures that would be anathema under just-in-time lean manufacturing in normal times. Toyota and Nissan have been asking their suppliers to increase stockpiles of chips as a contingency measure, and there are also changes emerging to the industry’s pyramidal supply chain, with its rigid tiered structure.

“The shortage of semiconductors will remain for a while. We will maintain our efforts to obtain stable chip supplies,” said Honda Executive Vice President Seiji Kuraishi at an earnings conference held on Nov. 5. The company set out long-term measures to consider that included stockpiling inventory, purchasing chips directly from chip manufacturers rather than relying on top-tier suppliers to do so, and signing long-term contracts with chipmakers.

Last month, Ford Motor signaled it could even go into the chip business itself, saying it planned to develop chips jointly with GlobalFoundries to boost its supplies. Nissan, with its alliance partners Renault and Mitsubishi Motors, is putting more work into predicting the outlook for microchip supply, including studying demand from nonautomotive businesses, according to its chief operating officer, Ashwani Gupta, at a news conference on Nov. 9.

The three companies are also working on “how we can be connected to the last point of the supply chain,” such as contract wafer manufacturers, he said.

Visibility is currently limited to direct suppliers, known as Tier 1 suppliers, and the suppliers to those suppliers, called Tier 2. Chipmakers are usually considered Tier 2, but TSMC and other contract manufacturers belong to a lower tier, or what Gupta calls “Tier n.”

“Toyota, at the beginning of this fiscal year, kept saying that it had enough semiconductors but ended up revising down the production plan just like other carmakers when its stockpiles run out,” said Seiji Sugiura, a senior analyst at Tokai Tokyo Research Institute. “This revealed that communication within the supply chain on a global basis was not as thorough as we had expected.”

Japan’s Ministry of Economy, Trade and Industry is among those trying to coordinate efforts to improve visibility. 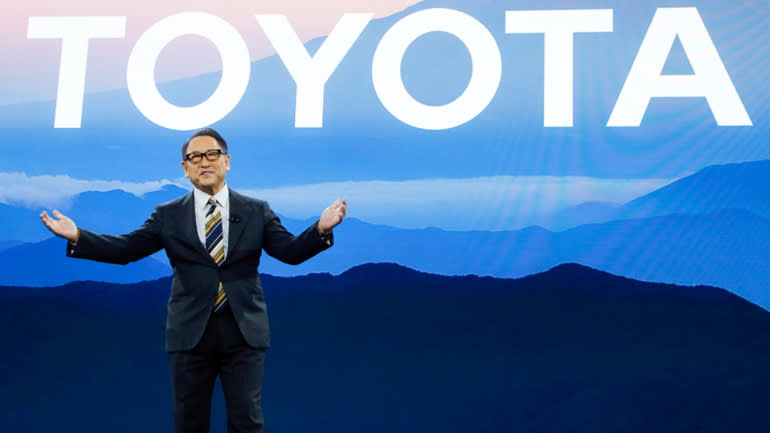 “It was only when the global supply glitch happened that we found out that carmakers weren’t aware of the overall picture of supply chain structure,” said Kenta Yamashita, deputy director of the automobile division at the ministry. “Carmakers used to believe that parts would be delivered as long as they made orders to Tier 1 suppliers.”

A ministry working group with 14 Japanese automakers is hoping to standardize how far in advance the industry orders chips, the better to ensure availability and plan investment. But the working group has yet to make a decision, and “it is unclear if we’ll do so by the end of this fiscal year through March 2022,” said Yamashita — another thing delayed by the delta outbreak in Asia.

In the meantime, vehicles themselves are being reengineered to address the crisis. Nikkei has learned that Nissan is redesigning its cars so it can use generic chips for functions such as regulating brakes and speedometers, reducing its reliance on custom-made chips and meaning it can avoid shutting down its entire production system when a particular chip is out of stock.

General Motors is looking to codevelop semiconductors that can handle multiple tasks in its vehicles, thereby reducing the types of chips it uses to just three product families over the next several years. This simplification would enable the American automaker to shrink the variety of chips it orders by 95% for future vehicles, it says.

GM, which is currently planning to build some vehicles without features such as heating for seats and steering wheels to get through the chip crunch, believes this longer-term simplification will give it an advantage. “We’re going to lead the industry with this. And this will drive quality and predictability,” GM President Mark Reuss said at an online investor conference.

After several months of slashing production targets, some carmakers have become confident enough to raise them again, making a string of announcements as delta ebbed and before omicron emerged. Toyota, the world’s largest carmaker, plans to produce around 800,000 vehicles in December — a record amount for the month but lower than the nearly 1 million figure shared with suppliers in the fall.   © Reuters

Backed by robust auto demand, Nissan aims to increase production in the second half of the fiscal year ending in March by nearly 300,000 units compared with the first half, according to plans shared with suppliers. Honda’s Kuraishi also said the company would start beefing up production from the beginning of 2022.

But Toyota, the world’s largest carmaker, plans to produce some 800,000 vehicles in December — a record amount for the month but lower than the figure of nearly 1 million previously shared with suppliers after its first cuts in the fall. On Thursday, Toyota said it had shut down production lines at two assembly plants in Japan because of supply chain problems at home and abroad. Delays in procuring parts from Southeast Asia were behind the shutdowns.

Nissan’s Gupta said that after “wave one” of fighting for chips with nonautomotive industries and “wave two” of the pandemic in Southeast Asia, “we are going through wave three, where the capacity constraints are evolving, mainly driven again by the sudden increase in the demand of nonautomotive and automotive [sectors],” adding, “That is why, even if we see the improvement, we think that this [constraint] is going to continue.”

Helmut Gassel, a member of the management board of Infineon, a German chip giant and a leading provider of auto-related chips, told Nikkei in October that the company anticipates the chip shortage could last all the way through 2022.

“Inventory levels have been particularly low in the automotive industry, [since] they tended to be lean,” he said, adding that this needs to change: “It makes sense to have a reasonable amount of inventory [in the auto supply chain] in order to buffer additional demand.”

Sugiura from Tokai Tokyo said that although the chip crunch may eventually ease, “carmakers are aware that there might be new risks replacing the chip shortage,” potentially involving materials such as rare-earth metals and batteries. Workers fill sacks with lithium carbonate at an extraction complex in Bolivia. Lithium supplies are key for the fast-growing electric vehicle industry.   © AFP/Jiji

Prices of battery materials are indeed surging. According to Chinese metals information provider Shanghai Metals Market, the average price of domestic battery-grade lithium carbonate stood at 213,500 yuan (about $33, 650) per ton as of Dec. 7, a fourfold increase from early 2021. S&P Global Platts said the price of high-grade cobalt in Europe has risen almost 90% since the start of this year.

Such price hikes are also occurring among more conventional materials, including steel.

“COVID-19 has definitely been an event that reminded us of new risks,” Sugiura said.

INCJ’s Shiga said that even if the car companies get over the massive supply chain disruption caused by the pandemic soon, “they will need to fundamentally change the [supply chain] network.” He added, “It’ll come with a tremendous cost, but they’ll have to face it.”