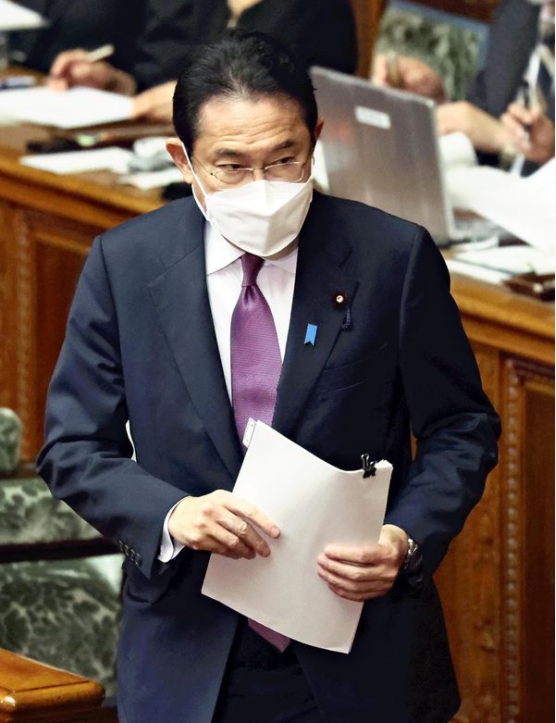 The Yomiuri Shimbun / Prime Minister Fumio Kishida is seen before answering questions at a plenary session of the House of Councillors at the Diet in Tokyo on Friday.

Prime Minister Fumio Kishida stressed “speediness” in implementing measures against the novel coronavirus during the question-and-answer sessions that lasted for three days until Friday in both chambers of the Diet.

During one session in the House of Councillors, Kishida referred to an oral drug that the government regards as the “key” to tackling COVID-19, saying, “As soon as the drug is approved, we will deliver it to the medical front lines promptly.”

He made the remark in response to Natsuo Yamaguchi, leader of the Liberal Democratic Party’s ruling coalition partner Komeito, who said, “The development and wide use of an oral drug [to treat COVID-19] is extremely important.”

Kishida also said the government has already secured 1.6 million doses of the oral drug, for which an application for approval has been filed in Japan.

Regarding border-control measures against the omicron variant of the virus, Kishida particularly stressed during the three days of sessions that the government has taken measures in a speedy manner. He is apparently mindful that the administrations of his predecessors, Shinzo Abe and Yoshihide Suga, were criticized for slow responses to COVID-19.

During the sessions, when some lawmakers asked Kishida about his views on other issues, such as constitutional revision and a review of “correspondence allowances” paid to Diet members, he often read out his responses from the documents he held in his hand.

According to government sources, Kishida had read the draft answers prepared by bureaucrats repeatedly until the last minute over the three days, making corrections with his own pen. His style of including his own words in his answers to questions as much as possible remains unchanged since his time as foreign minister, which lasted four years and seven months.

“He responds to questions in a clear and careful manner,” Hiroshige Seko, the LDP’s secretary general in the upper house, said of Kishida at a press conference on Friday. “I think people have noticed his political stance and strong determination.”

The stage for the Diet debate between the ruling and opposition parties will now shift to the budget committees of both chambers. The prime minister and all Cabinet members will attend the committee sessions for the lower house on Monday and Tuesday, where they will be asked questions in a different format.

In question-and-answer sessions of the type that ended Friday, each party representative makes a speech that contains multiple questions, and when it is the prime minister’s turn to speak, he responds to all of the questions at once.

The budget committee questioning involves more give-and-take, with each question immediately followed by an answer. “The prime minister may not be as good at fielding questions on the fly,” an LDP member said.