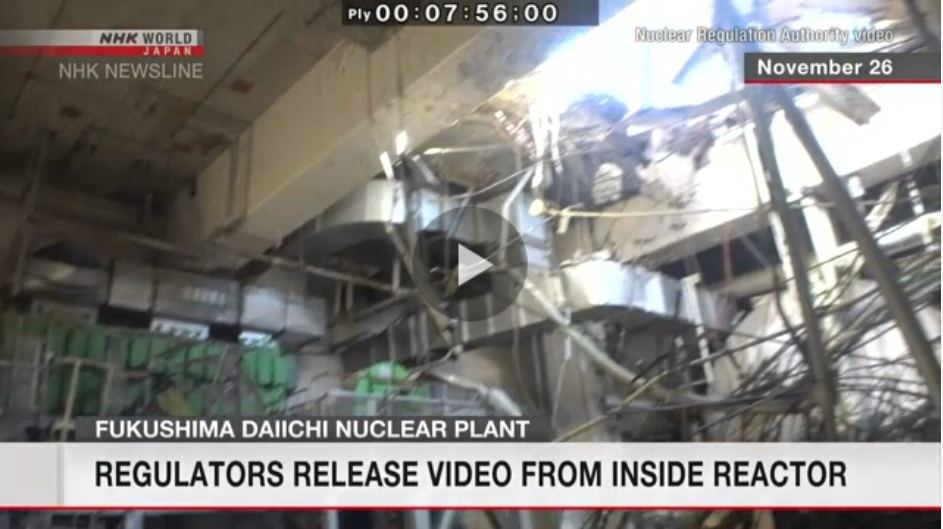 Japan’s nuclear regulators have released a video which captured an emergency system that was used to cool a reactor at an initial stage of the nuclear accident at the Fukushima Daiichi nuclear power plant in March 2011.

The Nuclear Regulation Authority investigated on November 26 a building which houses the No.1 reactor. It suffered a meltdown accident and a hydrogen explosion following a major earthquake and tsunami.

The video shows concrete and metal pieces covering a floor in the building.

Two orange colored tanks can be seen on the fourth floor. They are part of an isolation condenser system, which was used to cool the reactor at the early stages of the accident.

The plant also suffered a blackout, but the system is designed to function without power. Steam from the reactor is cooled and returned to water when it flows through the piping in the tank. However, it was not fully utilized at the time of the accident.

The regulators say the radiation level around the system is relatively high, 34 millisieverts per hour at the maximum, due to contaminated debris.

The regulation authority plans to continue the probe to identify any issues which can be incorporated into safety measures for nuclear power plants.