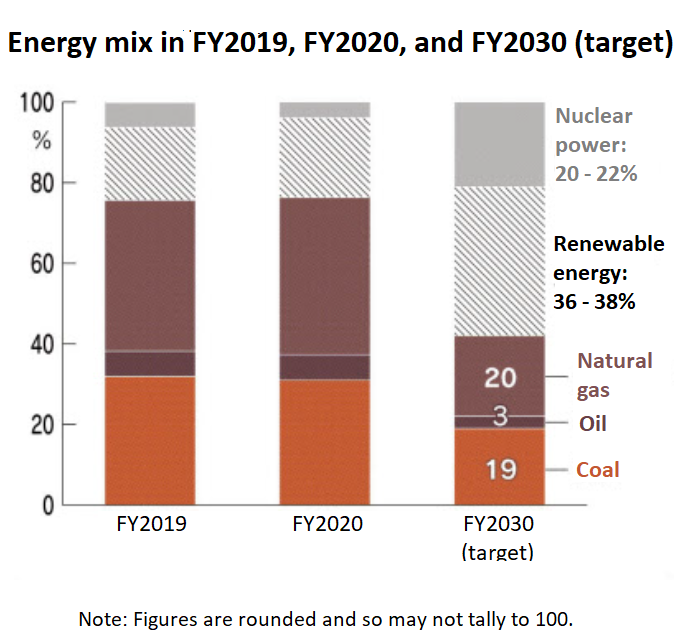 On Dec. 10, the Ministry of the Environment announced that Japan’s greenhouse gas emissions decreased in FY2020 by 5.1% from the previous fiscal year. Emissions have been decreasing by that margin since FY2009 after Lehman Brothers collapsed, but some say this is a small decrease, considering the impact of COVID-19 pandemic restrictions. Because nuclear power plants were shut down because of periodic inspections and other factors, thermal power made up 76.3% of Japan’s energy mix [in FY2020], up 0.7 percentage points from the previous year. Decarbonization of power sources remains far off.

Nuclear power made up 3.9% of Japan’s energy mix in FY2020, down from 6.2% in FY2019. Renewable energy as a percentage of the overall energy mix increased by only 1.7 points. This means the increase in renewables did not offset the halting of nuclear power plants. The government has set the goal of reducing greenhouse gas emissions in FY2030 by 46% compared with FY2013 levels. To achieve this, the government aims for renewable energy to make up 36-38% and nuclear power to make up 20-22% of Japan’s total energy mix. The outlook for achieving this is poor.

Looking at total greenhouse gas emissions by sector, emissions from the industrial and transport sectors have declined significantly due to the restrictions on economic activities and people’s movement. As socioeconomic activities begin to resume, there are concerns that energy consumption will increase and emissions will balloon again.