3 years after start of Henoko reclamation work, 30% of coastal area converted into land 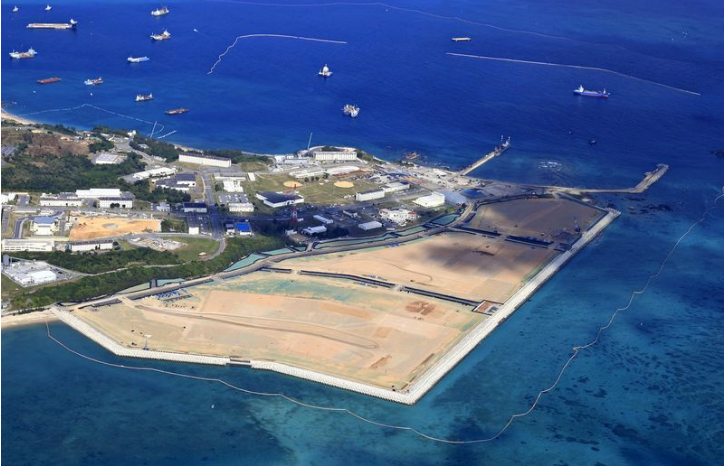 The Yomiuri Shimbun / The Henoko district of Nago, Okinawa Prefecture, is seen on Dec. 10.

Three years have passed since the Defense Ministry started landfill work in the coastal area of the Henoko district of Nago, Okinawa Prefecture, for the planned relocation of the U.S. Marine Corps’ Futenma Air Station in the city of Ginowan.

About 30% of the planned area has been reclaimed so far, but the Okinawa prefectural government’s opposition to work to reinforce the soft seabed has cast uncertainty over the relocation plan.

On Monday, a boat was docked at a new seawall on the northern side of the Henoko coastal area. An excavator scooped earth and sand from the ship to fill trucks that carried their loads to the reclamation area.

Construction of the 250-meter-long seawall began in August after all coral in the area had been moved. The construction was completed at the end of November, and since early December, the seawall has been used as one of three locations where earth and sand are unloaded.

“We’ll do everything we can to accelerate the reclamation work,” a senior defense ministry official said.

Since the start of land reclamation work in December 2018, 41 hectares of the planned 152-hectare area has been converted into land.

The reclaimed land reached a height of 4 meters above sea level in August this year, and work to raise it further is underway. The soil will eventually be raised to a height of about 10 meters at its highest point.

Chief Cabinet Secretary Hirokazu Matsuno told reporters on Monday, “Steady progress in the construction is what we need to complete the return of [the land hosting] the Futenma Air Station as soon as possible to eliminate dangers” posed by keeping the base in its existing location.

The government had planned to spend about four years reinforcing about 66 hectares of soft seabed, but in November the Okinawa prefectural government rejected the government’s request for design changes to its plan.

Earlier this month, the defense ministry filed an appeal with the Land, Infrastructure, Transport and Tourism Minister over the prefecture’s decision.

The moves are likely to lead to a new legal battle between the prefecture and the central government, which is considering issuing recommendations or instructions to the Okinawa government to get the plan approved.

In 2022, three elections will be held in Okinawa Prefecture that are likely to have an impact on the planned relocation: mayoral elections in Nago in January and Ginowan in autumn, and the Okinawa gubernatorial election, which is also slated for autumn.

The central government assumes work to reinforce the soft seabed will not start unless it wins its appeal, or a governor is elected who approves of the relocation plan.

Even if the central government wins the appeal, the targeted 2030 completion of the air station could be further delayed.