Do lawmakers, bureaucrats, and journalists have a truly accurate understanding of public opinion when making diplomatic and security decisions? Many times, discussions are based on personal experience and speculation.

Joining hands with social science specialists in Japan and overseas, the authors have analyzed volumes of statistical data on public opinion on various issues and published their findings in international academic journals. This article highlights the importance of understanding public opinion as accurately as possible when discussing foreign affairs and security issues.

Governments, think tanks, and others conduct opinion polls on diplomacy and security, but many of them are not scientific when viewed from the perspective of international standards.

A scientific and credible opinion poll is a survey that, from the survey design stage to the data analysis stage, is valid methodologically, transparent, and replicable. As in the natural sciences, surveys in the social sciences are also expected to adhere to high standards.

In the global academic community, it has become the norm for academicians to make efforts to raise the credibility of their research and surveys. As part of this, the authors disclose free of charge all data used in their papers published in international peer-reviewed journals. The data can be downloaded from the Harvard University “Dataverse” website, including the codes used in the statistical data analysis.

This kind of transparency is essential in public opinion polls. An environment is in place where researchers can use public data (which includes polling methodology) to refute another researcher’s data analysis and interpretation. It is this kind of open discussion that clarifies public opinion in democracies and helps reveal what policy responses the people want.

The authors joined hands with Gakushuin University Professor Hikotani Takako to administer a poll based on a survey experiment known as conjoint analysis. The topic of the poll was draft plans to deploy the “Osprey,” a type of transport aircraft said to have many accidents. Two of many possible scenarios were posed to the survey respondents, and they were asked to select one of them. This was repeated many times. The scenarios were randomly produced, differing in the conditions for the deployment (the scope of the Osprey exercises, whether there was night training, and whether the Osprey would be operated by the U.S. military or the Self-Defense Forces [SDF]). In this way, the researchers were able to pinpoint what the respondents considered important in deciding whether they support the deployment of the Osprey.

The poll showed that a high percentage of Japanese support operations led by the SDF, but there is a strong tendency for them to oppose operations led by the U.S. military. Even respondents who support the Japan-U.S. alliance overall have rather low confidence in the U.S. military. This should be kept in mind in efforts to facilitate security cooperation between the two nations going forward.

The survey also found that the Japanese public does not place much importance on the economic compensation the government gives a locality when it hosts security-related facilities. This is contrary to what is generally thought. It cannot simply be assumed that the people’s support can be gained through local economic promotion measures.

The second issue is how the Japanese public perceives security crises. A security crisis could arise at any time in East Asia today. For example, in December 2018, there was an incident in which an SDF aircraft was illuminated by a South Korean Navy destroyer’s fire-control radar. At these times, the governments cast accusations at each other. Why do these blame games escalate between nations that want to avoid a military confrontation?

With Hokkaido University Associate Professor Kohama Shoko and Kwansei Gakuin University Professor Inamasu Kazunori, Professor Tago used a survey experiment to analyze public opinion at the time. The study found that Japanese thought that the international community would take the side of South Korea if Seoul criticized Tokyo and Japan kept silent. South Koreans had the corresponding view. 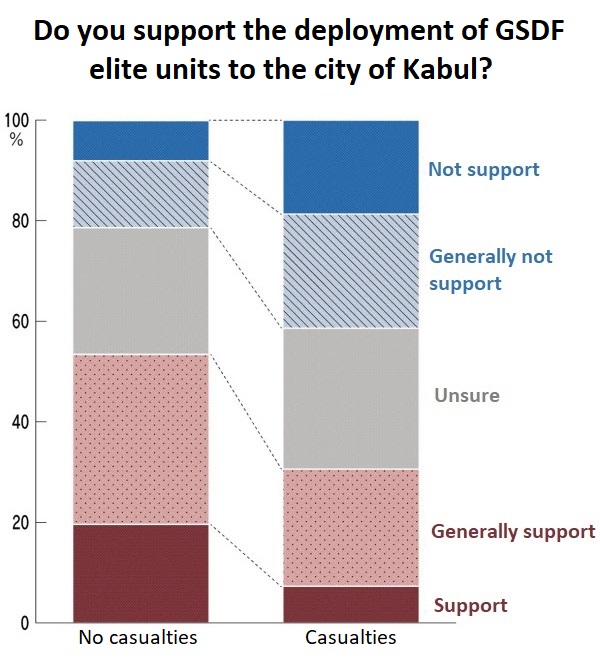 To capture the public’s view of a crisis, the people’s reaction must be quickly ascertained during the crisis. The authors joined hands with others to poll the public in real time about what government decision it would support regarding the evacuation of civilians during the Afghanistan crisis at the end of August 2021.

The scenario of taking Ground Self-Defense Force elite units that were on standby at the Kabul airport and deploying them to the city to carry out rescue operations was selected for the study. Pollees were presented with this “possible future deployment” as a fictitious scenario and asked if they would support it.

Opinion polls on contingencies have not been conducted in Japan because none have actually occurred. It is possible and necessary, however, to look into public opinion about actual SDF activities, such as during the Afghanistan crisis.

Third is the issue of public diplomacy. In discussions on security, attention is focused on whether to increase defense spending and whether to acquire the capability to attack enemy bases. But diplomacy is a basic tool for maintaining the safety and prosperity of the people. Increasing Japan’s allies through diplomacy is a key security policy.

Professor Horiuchi joined hands with Australian National University Professor Ben Goldsmith and Florida State University Assistant Professor Kelly Matush to conduct a study that confirmed that national leaders’ overseas visits and the “public diplomacy” that accompanies such visits lead to the visited country’s people having a more favorable view of the visiting leader. Public relations diplomacy can be a source of so-called soft power.

More and more empirical research is being conducted on soft power. One such study is a joint research project Professor Tago conducted with Doshisha University Professor Asaba Yuki, City University of Hong Kong Associate Professor Kobayashi Tetsuro, as well as Seoul National University (SNU) Professor Kyu S. Hahn and SNU’s Seulgi Jang. The study found that just having people watch a video calling for more Japan-South Korea cooperation increased the number of people who support wide-ranging bilateral cooperation. Japanese and South Koreans frequently are exposed to information that makes the other seem dislikable or portrays them negatively. It cannot be denied that this may make cooperation between the two countries more difficult.

Through public diplomacy, the new Kishida administration should actively strive to turn many countries into friends of Japan. This should include the democracies in the Asia-Pacific region.

Japan faces a harsh international environment today. To implement effective diplomatic and security policies, it is essential to accurately and quickly grasp public opinion in democracies.