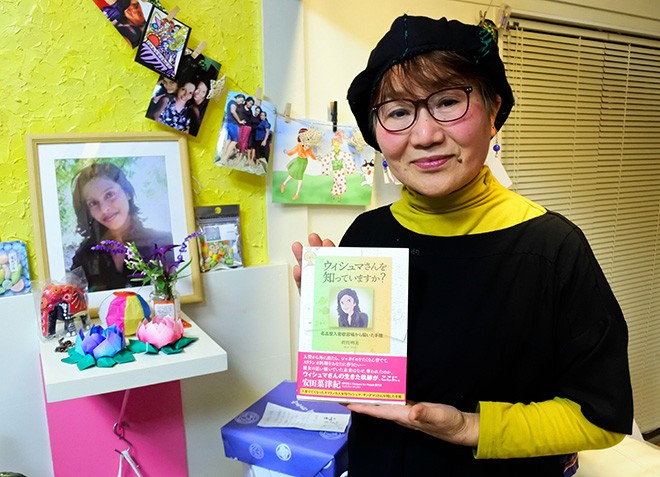 Akemi Mano poses with a copy of her book containing reproductions of the letters she received from the late Wishma Sandamali, in the portrait, in Tsushima, Aichi Prefecture, on Oct. 26. (Toshihiro Kashiwagi)

TSUSHIMA, Aichi Prefecture–Akemi Mano struck up a friendship late last year with a Sri Lankan woman who was being detained at an immigration facility in Nagoya for overstaying her visa.

The 68-year-old singer-songwriter, who accommodates foreign nationals who were granted provisional release, hoped to welcome the woman into her home as well.

But Wishma Sandamali will never get to experience her hospitality.

Wishma, who applied for provisional release twice but was never given one, died in the facility of the Nagoya Regional Immigration Services Bureau on March 6. She was 33.

In October, Mano published a book titled: “Wishma-san wo Shitte Imasuka?” (Do you know Wishma?). It contains the photos of all 13 letters she received from the Sri Lankan in the course of about two months, along with Japanese translations and Mano’s own thoughts.

“What kind of dishes would Wishma have cooked for us if she were here?” Mano said at her home in Tsushima, Aichi Prefecture.

Foreign dishes are often served on the table at Mano’s home, where she is currently hosting five men and women, who are Ugandans and Kiribatians.

Wishma would have joined them, too, if she had been released.

Mano first met Wishma at the immigration facility in Nagoya in mid-December last year at the request of a detainee support group.

Wishma said she had suffered physical abuse at the hands of a former boyfriend. Mano sent her drawing paper and pens. She hoped that Wishma would not have to brood over her painful memories.

Mano received a letter from her four days later.

“I am so happy because, now I have you as my guardian too,” part of the letter said in English. “I think I wrote a lot to you. I will write to you again and waiting for your kind reply.”

Wishma’s text was sometimes written in English and sometimes in Japanese. She wrote about recollections of a dog she kept, the guitar she played as a hobby and other subjects. Colorful illustrations sometimes accompanied her letters.

She wrote in English toward the end of the year, “2021 will be a nice year for me too. Because I can be with you and family later.”

In reply, Mano sent Wishma lyrics she wrote for a song. During a visit in the new year, she gave an impromptu live performance for the Sri Lankan on the other side of an acrylic panel.

In mid-January, Mano received a letter written in hiragana from Wishma saying that she could no longer eat.

Mano wrote back telling her she should go to the hospital immediately.

“I am taking medicine because I am afraid of dying,” Wishma said in her reply in Japanese. “There are so many things I wish to do with you, Mano-san.”

Wishma complained of numbness in February.

“They are telling me that I am (only) in stress,” she wrote in English, referring to how immigration officials were dealing with her. “These people don’t take me to the hospital.”

In a letter dated Feb. 8, Wishma apologized for having declined to see Mano because of her poor health.

“Thank you for thinking about me,” she wrote in English. “I love you Mano-san, Wishma.”

That was the last of the 13 letters that Mano received.

Mano and others called on immigration officials to have Wishma receive medical treatment, but their efforts were in vain.

“Oh, she was calling so hard for help,” Mano thought when she reread Wishma’s letters after she died.

When Wishma’s death was in the news, some internet posters came down hard on Wishma, who was not staying legally in Japan after she lost her visa.

They said she had only herself to blame because she had not left for her home country earlier.

“Some believe her death couldn’t have been helped,” Mano said. “I want to tell exactly those people what kind of person Wishma really was.”