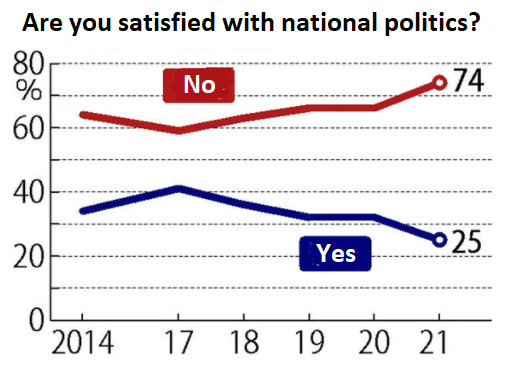 Nearly three-quarters of voters are dissatisfied with the current political situation, according to an opinion survey conducted by The Yomiuri Shimbun and Waseda University’s Institute for Advanced Social Sciences.

The nationwide mail-in survey was conducted to gauge the political sentiment among the public after the House of Representatives election in October.

At 74%, the percentage of respondents who said they were dissatisfied with the political situation — which includes those who selected “somewhat dissatisfied” — was the highest logged in the six surveys conducted since 2014 when the same question was first asked.

Twenty-five percent of respondents were satisfied, including those who selected “satisfied to some extent.”

Regarding the government’s response to the novel coronavirus pandemic, 54% gave it a positive evaluation while 45% evaluated it negatively.

Among the respondents who were dissatisfied with the current political situation, 53% negatively evaluated the government’s pandemic response, while 45% gave it a positive evaluation.

Among dissatisfied respondents, 27% voted for the ruling Liberal Democratic Party in the proportional representation election for the lower house in October, the highest percentage among the parties.

Although the opposition parties would be expected to receive votes from people critical of the government, only 22% of dissatisfied respondents voted for the Constitutional Democratic Party of Japan and 19% for Nippon Ishin no Kai (Japan Innovation Party).

According to the survey, the public wants a strong opposition, with 82% of respondents saying they “agree” that an opposition party capable of challenging the LDP is needed. The figure was high even among respondents who voted for the LDP in the October election, at 75%.

In a multiple-answer question on what respondents considered to be important issues in the October election, the economy and employment topped the list at 65%, followed by social security such as healthcare, pensions and nursing care at 61%, and measures against COVID-19 and other infectious diseases at 50%.