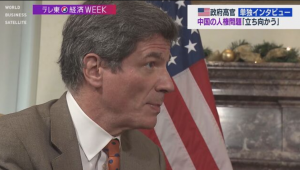 TV Tokyo’s regular business news program “World Business Satellite” carried a two-minute report on its one-on-one interview with visiting Under Secretary for Economic Growth, Energy, and the Environment Fernandez that was conducted at the Ambassador’s Residence earlier in the day. The segment followed a report on Russian President Putin’s announcement that he will attend the Beijing Olympics amid decisions by the United States and other nations not to send any official representation to the Games. When asked why the United States announced its decision not to send government officials to the Games at such an early date, the Under Secretary was shown saying: “We can’t ignore what is going on in Xinjiang—the human rights abuses, the genocide. We will, as the world, look back on those events frankly with shame unless we take a stand against it.”

The network noted that the Under Secretary held a teleconference with special advisor on human rights issues Nakatani on bilateral cooperation in the area of human rights. He was shown on the program saying: “Japan is a human rights champion. It is a country that has cooperated with us and believes in human rights. So there’s not a lot of difference there.”