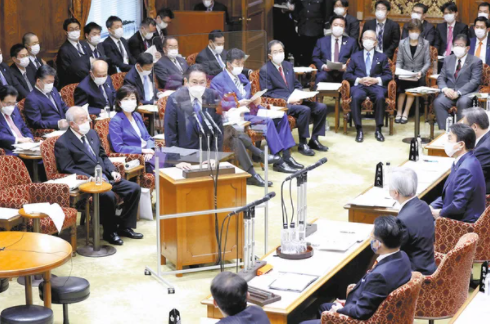 Lawmakers deliberate on the FY2021 supplementary budget at the Upper House budget committee meeting on Dec. 16. (Photo by Genko Masanori)

The following is the gist of interpellations at the Upper House budget committee meeting on Dec. 16, 2021:

Fujii Motoyuki (Liberal Democratic Party): How will the government proceed with the administration of third shots of the COVID-19 vaccine?

Prime Minister Kishida Fumio: We initially decided to allow third shots to be given eight months after the second in principle, but we recently announced our decision to move up the schedule with an eye to take all possible measures to prevent the spread of infection. We will finalize the overall vision for our vaccine efforts as soon as possible and present it to local governments, while also making efforts to secure vaccine supplies in order to ensure the smooth administration of third shots.

Arita Yoshifu (Opposition parliamentary group in the Upper House consisting of the Constitutional Democratic Party of Japan and the Social Democratic Party): Will the government ban the entry of all foreign nationals until that time?

Kishida: We have to be ultracautious about the unknown risk posed by the Omicron variant. We are taking border control measures as a temporary emergency measure. We must continue to be cautious until we learn more about Omicron and can predict to some extent the degree of risk.

Kidoguchi Eiji (Opposition parliamentary group in the Upper House consisting of the Constitutional Democratic Party of Japan and the Social Democratic Party): The government has indicated a willingness to continue actively increasing government spending amid the pandemic. What are your basic thoughts on this?

Kishida: My basic idea is that we have to give priority to rebuilding the economy because public finance is based on the economy. Then we will work to restore fiscal soundness. We will expand all possible measures to combat COVID, steadily provide support to people hit hard by the pandemic, and promote efforts to reboot the economy. After that, we will address (the reconstruction of) the fiscal situation. Focusing our efforts on COVID measures now and rebuilding finances in the medium to long term is compatible.

Kishida: I understand people have different opinions depending on their positions, but at the moment, I’m not planning to attend myself.

Haku: Will the Japanese government declare a diplomatic boycott? It is most undesirable to be wishy-washy.

Kishida: It is important for Japan to make a decision at an appropriate time by taking various factors into account in light of its national interests.

Haku: The UN General Assembly adopted the Olympic Truce for the 2022 Beijing Games without voting. Why didn’t Japan co-sponsor the truce?

Arita: Reclamation work continues in the Henoko district of Nago City, Okinawa Prefecture, for the planned relocation of the U.S. military’s Futenma airbase. I want [the government] to promise not to use the soil in the southern part of the prefecture, where the remains of people who lost their lives in the Battle of Okinawa are still being exhumed.

Kishida: I’d like to refrain from commenting on the source of soil from my perspective, but I’m acutely aware that the issue of remains is particularly important in Okinawa, which experienced a gruesome ground battle during World War II. I believe the construction [of a U.S. military base] in Henoko is the only solution to eliminate the dangers posed by the Futenma airfield, which is the most dangerous [air base] in the world.

Arita: Why is Henoko the only solution?

Minister of Defense Kishi Nobuo: In Henoko, we can secure acreage, including runways. Also, we can utilize the existing US. military facilities and areas, and relocate Futenma without negatively impacting their functions. We concluded that Henoko is the only solution after comprehensively taking into consideration that the planned relocation can give maximum consideration to the natural and living environments in Henoko.

Kidoguchi: How will the release of treated water from TEPCO’s Fukushima Daiichi Nuclear Power Plant affect reconstruction projects [in areas hit by the March 2011 disaster]?

Minister for Reconstruction Nishime Kosaburo: It is important to prevent the water release from hampering reconstruction efforts. It is also extremely important to release accurate safety information that is based on evidence. We, as the Reconstruction Agency, will do our best to address the issue of harmful rumors by effectively providing information through many media channels, including the Internet and radio. (Abridged)