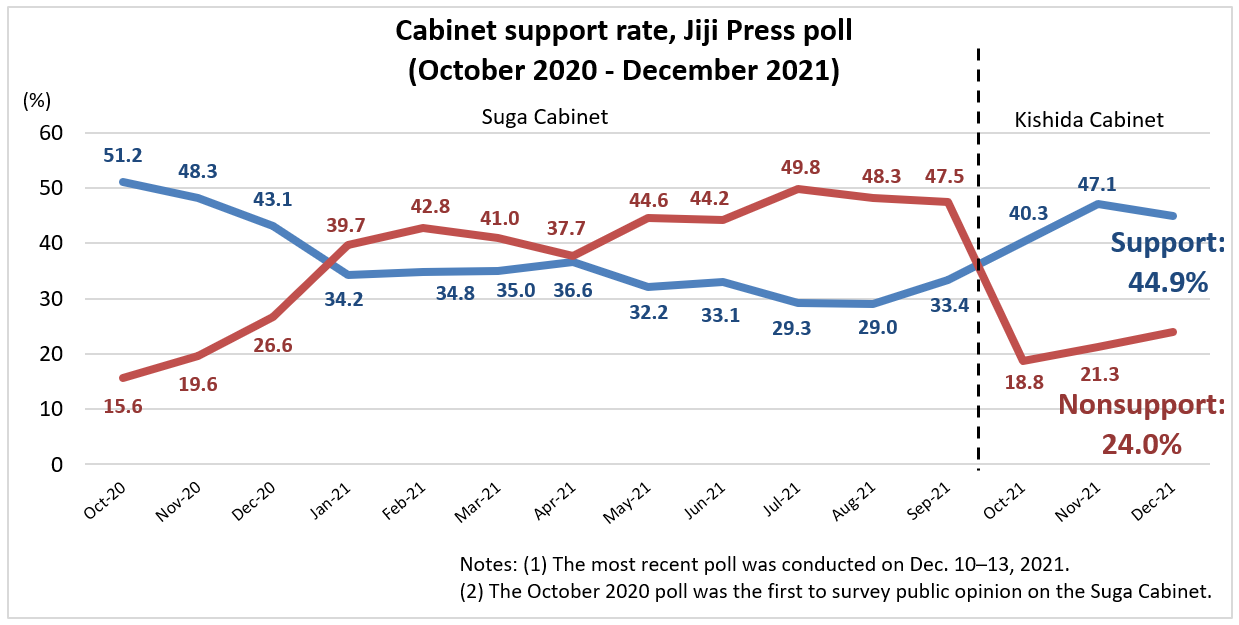 The disapproval rate rose 2.7 points to 24.0 pct, according to the opinion survey, conducted for four days through Monday.

The proportion of people who said neither or that they do not know stood at 31.1 pct, down 0.5 point.

The results may reflect confusion over ways to distribute benefits worth 100,000 yen per person under age 19, a measure to be financed with the government’s fiscal 2021 supplementary budget, currently under deliberation at the Diet, Japan’s parliament.

The CDP’s election of Kenta Izumi as its new leader at the end of November did not lead to a rise in public support.

Public support stood at 3.6 pct for Komeito, the LDP’s coalition partner, 1.0 pct for the Japanese Communist Party, 0.6 pct for the Democratic Party for the People, 0.5 pct for Reiwa Shinsengumi, 0.2 pct for the Social Democratic Party and 0.1 pct for NHK to Saiban Shiteru To Bengoshiho 72 Jo Ihan De, a single-issue party critical of public broadcaster NHK, or Japan Broadcasting Corp.

The proportion of respondents with no particular favorable party came to 55.9 pct, up 2.8 points.

Meanwhile, the share of respondents who support the government’s responses to the novel coronavirus crisis stood at 45.7 pct, down 0.9 pct, while that of those critical rose 1.5 points to 33.5 pct.

The proportion of people who said neither or that they do not know stood at 20.8 pct.

Of the Kishida cabinet supporters, with multiple answers allowed, 16.1 pct said there is no other person suitable to be prime minister, 11.1 pct said they trust him, and 10.0 pct said they have a good impression of him.

Of those critical of the Kishida cabinet, 12.5 pct said they expect nothing from his cabinet, 7.3 pct said its policies are bad, and 5.8 pct said they do not support the LDP.

The interview survey covered 2,000 people aged 18 or over. Valid responses came from 62.6 pct.