Senate approves appointment of Rahm Emanuel as next U.S. ambassador to Japan 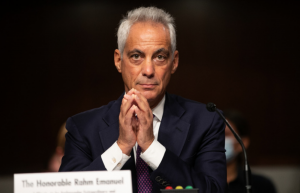 All national dailies, TV networks, Jiji Press, and Kyodo News reported over the weekend that the Senate approved on Saturday the appointment of former Chicago Mayor Rahm Emanuel, who also served as chief of staff under President Obama, as the next U.S. ambassador to Japan. Nikkei wrote that Emanuel is expected to assume the post of ambassador in early January. The papers said that Emanuel developed close personal ties with President Biden when he was chief of staff under President Obama. Yomiuri quoted a senior GOJ official as saying that once a relationship has been established between the government and Emanuel, there is no better person to serve as a liaison between the leaders of the two nations.

Asahi wrote that the past few ambassadors to Japan have been individuals who made financial contributions to presidential campaigns and Emanuel will be the first powerful political figure in quite a while to hold the post, following in the footsteps of former Ambassadors Mondale and Baker. The paper said Emanuel is not only close to President Biden but also Chief of Staff Ron Klain, Secretary of State Blinken, and others in the President’s inner circle, quoting one of his aides from when he was the mayor of Chicago as saying: “Japan will have the President’s ear, and it will be extremely meaningful to have a direct line of communication.” The paper claimed that since Emanuel is a powerful political figure who has a direct connection to the White House, he may become a strong political presence in U.S.-Japan relations, adding that U.S. pressure on Japan may increase as a result.

Yomiuri noted that since Emanuel expressed hope that Japan will increase its defense spending for dealing with China during his Senate hearing in October, attention will be focused on how he will call on the Japanese government to do so after he becomes the ambassador to Japan.

NHK reported online on Sunday that following his approval by the Senate, Emanuel posted a tweet that said in part: “Our 60-year-old alliance with Japan promotes peace and prosperity. Most importantly, it strengthens our shared democratic values.” The network noted that he also tweeted, “What we build in partnership over the next three years will determine America’s posture over the next 30 years in the Indo-Pacific region,” and pledged to “work tirelessly to deepen our ties as our countries confront common challenges.”

According to Yomiuri, Senator Hagerty congratulated Emanuel on his confirmation by tweeting: “Though our political backgrounds differ, Amb. Emanuel shares my conviction that the U.S.-Japan relationship is the cornerstone of peace & prosperity in an important region.”

As for Japan’s reaction, MOFA reportedly sent Emanuel a congratulatory message from Foreign Minister Hayashi saying: “We are pleased to welcome you as you have earned President Biden’s strong trust. I look forward to coordinating and cooperating closely with you to further strengthen the U.S.-Japan alliance and realize a ‘free and open Indo-Pacific.’”