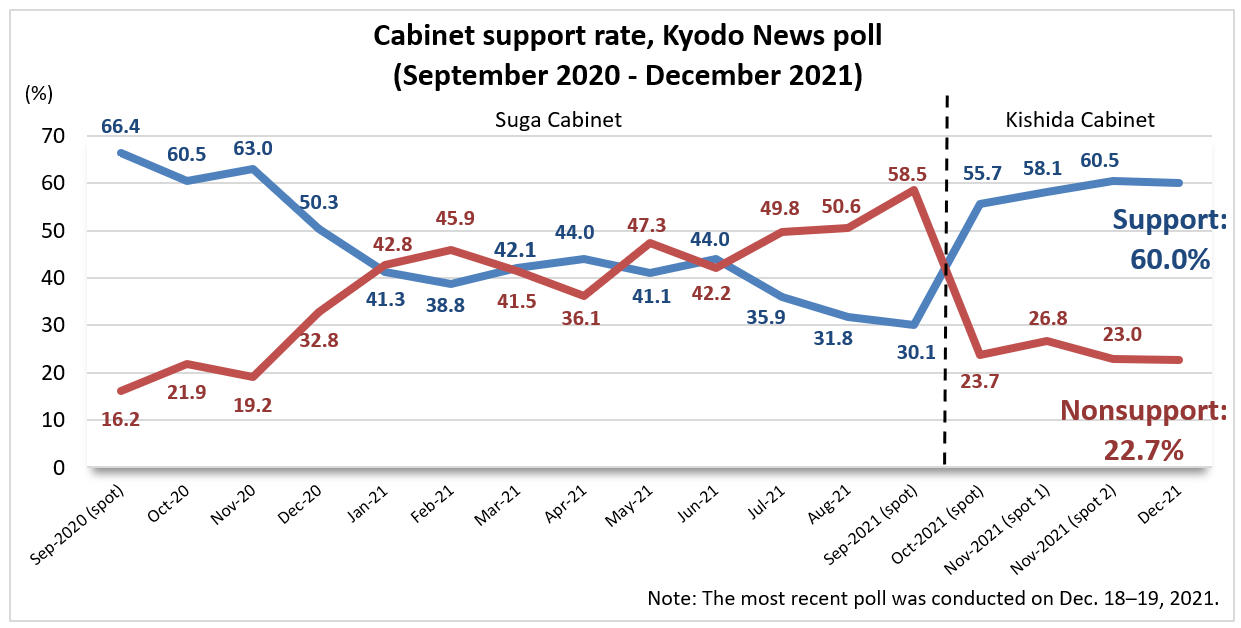 TOKYO — Prime Minister Fumio Kishida has failed to win public support for his government’s plan to provide cash and vouchers to families with children to boost the economy, with nearly 80 percent of households preferring all-cash handouts, a Kyodo News poll suggested Sunday.

The approval rating for his Cabinet stands at 60.0 percent, down 0.5 point from November, while the disapproval rating fell to 22.7 percent from 23.0 percent, according to the survey that came as the government has been struggling to prevent the spread of the Omicron variant of the novel coronavirus.

Kishida is working to revive the pandemic-hit economy with steps such as cash handouts for households, but he has been accused of reversing his position and causing confusion.

In the two-day telephone poll conducted through Sunday, 79.2 percent of respondents supported providing the 100,000 yen ($880) in benefits to child-rearing households in the form of cash.

Kishida’s government had planned to initially give 50,000 yen in cash and the remainder in vouchers later for each child aged 18 or younger living in a household in which the primary earner’s annual income is less than 9.6 million yen.

The government later decided to allow municipalities to provide all-cash benefits. Opposition parties had argued that issuing vouchers would result in massive additional costs and add to the burden on local governments that are currently preparing to administer booster vaccine doses for COVID-19.

Kishida has also allowed local governments to decide on whether to eliminate the income cap, a move endorsed by 52.1 percent of respondents and opposed by 45.1 percent.

The poll also showed anger among the public following the government’s admission this month that monthly construction order data had been overstated for about eight years, with 77.6 percent saying it had hurt their trust in official statistics.

As for the government’s response to the pandemic response, 60.9 percent said Kishida has handled it properly, up 2.6 points, while 35.2 percent his handling has been poor.

On Friday, Kishida announced a plan to reduce the interval for administering COVID-19 booster shots by one to two months for about 31 million health care workers and senior citizens.

The move was seen as “appropriate” by 53.5 percent, while 32.0 percent said it should apply to the wider public.

Among the opposition, the Japan Innovation Party was supported by 12.5 percent, followed by the larger Constitutional Democratic Party of Japan at 11.6 percent.

The Japanese Communist Party was chosen by 4.3 percent. The Democratic Party for the People garnered 2.0 percent, with the anti-establishment Reiwa Shinsengumi at 1.6 percent.

The share of respondents who said they do not support a party was 17.9 percent.