TOKYO — Concern is growing in Japan’s farming and nursing care communities now that the government has again closed the border, this time in an attempt to keep the omicron variant at bay.

How successful the closure will be is anyone’s guess, but there is no doubt it will keep out the migrant workers that care facilities and farmers have come to rely on.

Japan closed the gates to foreign nationals on Nov. 30. A similar ban that had been put in place much earlier in the COVID-19 pandemic, blocking foreign business travelers, students and technical intern trainees, was lifted only weeks earlier on Nov. 8. The trainees had been deployed to support sectors suffering from labor shortages as a de facto workforce.

Aichi Prefecture-based Kaikoukai Healthcare Group, which operates hospitals and provides nursing care services, was planning to accept six foreign technical intern trainees from Indonesia this past spring. But the entry ban scotched the plan, and the trainees have had to stay put in Indonesia.

“We are having a difficult time proceeding with our manpower planning,” Kazuhide Kumazawa, division manager of the home care division, told Nikkei Asia. “In Japan, the number of workers is overwhelmingly lacking.”

Since 2018, the group has been offering classes teaching Japanese nursing care standards to trainee candidates in Indonesia, hoping to nurture talent.

“We’ll continue to do what we can,” said Kazuya Abe, general manager of the group’s overseas human resources development department. “We cannot just wait [until the border reopens]. In May, the group began offering online classes to university students in Indonesia who may come to Japan in the future.

But because it is uncertain when the border will reopen, Abe said the company cannot rely on the six Indonesians, since they are not able to enter Japan. The company is becoming increasingly concerned that potential migrant workers will go back on their decision to come to Japan.

Kaikoukai is not alone in its struggles. Fukujukai, a Tokyo-based medical institution, was planning to accept 33 Filipinos who had passed Japan’s Specified Skilled Worker test in their home country, possibly starting next month. But “we have to wait again,” said Yuko Fukazawa, director of Fukujukai’s business promotion department. “We’ll proceed with it once the entry ban is lifted but matters are unpredictable at the moment.”

Specified Skilled Worker is a residency status the Japanese government introduced in April 2019 for foreign nationals willing to work in any of 14 industries, such as nursing homes and restaurants.

“Since Nov. 8, after media reported that the entry ban was being lifted, we have had many inquiries,” said Nobutada Doi, head of Million Cooperative Association, a staffing agency that introduces foreign technical intern trainees to companies. But now “there’s no prospect of reopening.”

Doi said the Hokuriku region’s largest intern trainee agency has 150 Vietnamese, Indonesians, Filipinos and Chinese waiting to apply to enter the country and work in factories. “They say they want to come to Japan as soon as possible,” Doi said. “There are even [trainees] who have been waiting [to enter Japan] for more than a year and a half.”

Since last year, Doi has prepared about 35 apartments so arrivals can quarantine by themselves upon entering Japan. Each room has a tablet so the trainees can study Japanese culture and language. With the travel ban back in place, the rooms remain empty, awaiting their occupants.

Japan’s agricultural sector has been particularly hard hit by the pandemic, which has cut it off from the migrant laborers it has come to rely on.

JA Tone Numata, an umbrella organization of agricultural cooperatives in Gunma Prefecture, near Tokyo, was supposed to start working next month on the visa applications of 50 foreign trainees from Vietnam and China. But now the organization expects their arrivals to be delayed. 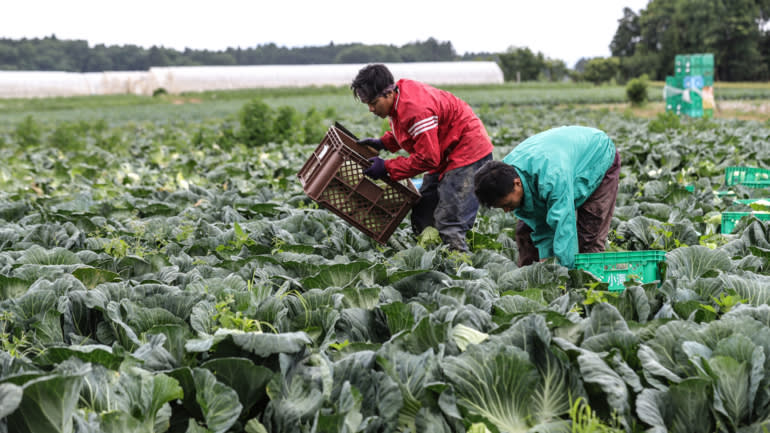 Indonesian migrant workers work in a cabbage patch in Ibaraki Prefecture, Japan. A representative from a farm co-op says, “There’s always a labor shortage in the farming sector.” (Photo by Ken Kobayashi)

Many organizations like JA Tone depend on foreigners to keep going. If because of a lack of foreign workers “we cannot harvest, there’s no choice but to waste vegetables,” a representative said.

With the government having decided to once again close the country, JA Tone Numata plans to hire foreign workers who already live in Japan on a temporary basis. But even that will not be enough. “There’s always a labor shortage in the farming sector,” the representative said.

Speaking to reporters on Nov. 30, Agriculture Minister Genjiro Kaneko said he will continue to offer subsidies when the sector hires workers from other industries, and extend the periods of stay for foreigners already in Japan.

“I would like to pay close attention to the [omicron] situation and make sure the impact on the agriculture, forestry and fisheries sectors,” Kaneko said during a news conference.

According to Japan’s immigration agency, the country had 38,337 specified skilled workers as of September. Its goal is to bring in up to 345,000 workers by fiscal 2023, but the latest travel ban has put that target in doubt.