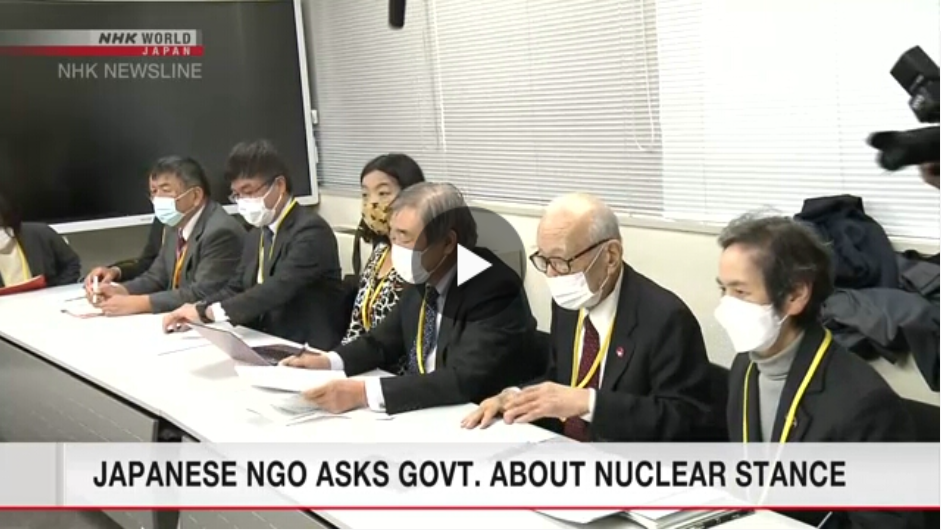 A Japanese anti-nuclear group has met government officials to discuss Japan’s stance ahead of a review conference on a nuclear non-proliferation treaty.

The Japan NGO Network for Nuclear Weapons Abolition consists of a group of atomic bomb survivors, or hibakusha, and non-governmental organizations.

Representatives of the group visited the Foreign Ministry on Monday and met officials for about one hour.

The representatives asked the government to urge nuclear powers to do more to reduce their nuclear arsenals.

They also demanded that a final document from the conference clearly recognize the inhumanity of nuclear arms and the significance of the UN Treaty on the Prohibition of Nuclear Weapons.

Officials responded that as the world’s only atomic-bombed country, Japan will stress the need to spread an accurate perception about the inhumanity of nuclear weapons.

But they maintained their traditional stance that Japan will not join the treaty, and said efforts should be made to make major nuclear powers get involved in it.

After the meeting, Tanaka Terumi, a representative of the group, said the government stance has not changed even under Prime Minister Kishida Fumio, a politician from a Hiroshima electoral district.

Tanaka said he sensed that the government does not understand the voices of hibakusha. He added that he wanted to see the government break from its traditional stance, but that it appears to see nuclear issues as someone else’s problem.

The Review Conference of the Parties to the Treaty on the Non-Proliferation of Nuclear Weapons is to be held at the UN headquarters in New York next month.