“Women who want both kids and a career are greedy.” Huh? 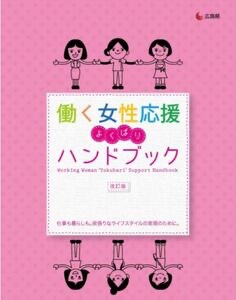 A handbook issued by the Hiroshima prefectural government to support working mothers is creating a stir. The book, which has the English title, “Working Women ‘Yokubari’ Support Handbook,” attracted attention after the prefecture posted a message on its Twitter account on Nov. 27 announcing that it is distributing the booklet for free. The 50-page handbook, first issued in 2014 and revised in 2020, offers useful information for working mothers on pregnancy and childbirth support systems. The problem lies in its description of the working mothers as yokubari, which means “greedy.”

Many Twitter users reacted sharply to the message, posting angry comments. “So getting married, having children, and continuing to work are considered greedy?” said one.  “This is such an anachronistic way of thinking,” said another. According to the Hiroshima government, the use of the word “yokubari” is intended to be a “positive” expression of the prefecture’s vision developed in 2015, which calls for realizing a “yokubari” lifestyle in which neither men nor women must give up their jobs to raise a family. Nevertheless, it clearly upset many. The prefectural government’s Twitter account usually receives no more than ten comments per tweet. This tweet, however, received more than 1,000 comments, was retweeted nearly 9,000 times, and was reported on by various media outlets. 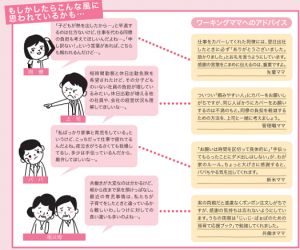 But the prefecture’s use of the word “yokubari” wasn’t the only thing in the handbook that people took issue with. It contains a section that advises women how to mentally prepare for becoming working mothers. It says that getting the necessary cooperation at home and in the workplace is essential for working mothers to balance work and family and includes the following “comments” from an imaginary woman’s supervisor and husband:

Supervisor (with an illustration of an angry face): “She requested shorter working hours and asked to be excused from working on holidays. But this will put a heavier burden on the employees who don’t have children. I hope she understands the financial situation of the company and the fact that other employees will have to work more on holidays….”

Husband (with an illustration of a troubled face): “She says she’s the only one who does the housework and childrearing. But I’m exhausted from work. I don’t complain when our child cries in the night and I do help with some of the housework, so give me a break….”

The handbook stresses the importance for working moms to “express appreciation and give consideration” to such supervisors and husbands to gain understanding for their decision to continue working while raising a family. As if that were not enough, the booklet also includes the following advice from “experienced” working mothers.

“We tend to ask the colleagues who are easy to ask for help to cover for us. But if you keep asking the same people, they’re going to get frustrated. Together with your supervisor, you should think about the best way to lessen the burden on your colleagues.”

“Our household rule is for me to make very specific requests and never complain about how my husband does the housework. If I express my appreciation profusely, he feels more motivated.”

Not surprisingly, this section of the handbook came under intense criticism on the Internet. People posted comments on Twitter saying things like: “This will only serve to instill a sense of guilt [in working mothers],” “Shorter working hours are supposed to be a workers’ right. Why is this handbook recommending that working mothers ‘think’ about it with their supervisors?” and “Why do you have to thank a husband who has zero awareness as a father?” 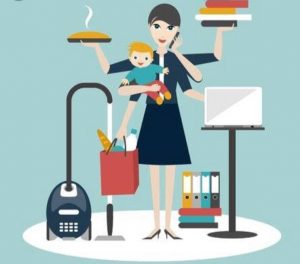 Kira Tomoko, an author and expert on gender history, wrote in Tokyo Shimbun (12/9): “Only women are asked to balance work and family. Although the handbook starts by saying women are expected to participate actively, the fact is that women have always participated actively at home and in their local communities. However, the places where they were allowed to participate were conveniently decided by the patriarchy. For example, during the war, women were asked to do the jobs of the men who had gone to fight, but after the war they had to leave the workplace to make room for the men who had returned. The booklet is symbolic of the fact that Japan’s patriarchal society has not changed. The members of the Hiroshima government’s office in charge of supporting working women are all men. One company came under fire recently for an ad that appeared to praise a mother for taking care of her children and doing the housework almost entirely by herself. However, this handbook is worse than that because it was created by a local municipality. The government’s role should not be to maintain a social structure that instills a sense of guilt in women or forces them to be patient. Rather its role should be to change the social structure.”