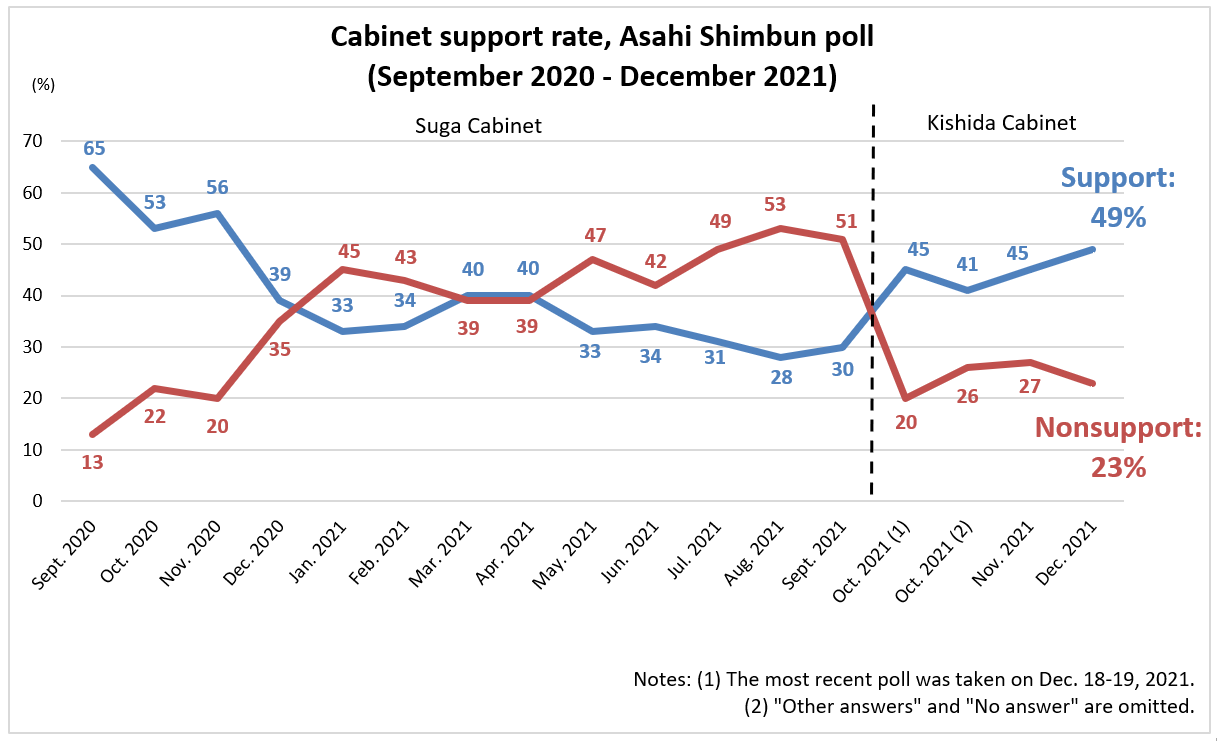 The approval rating for Prime Minister Fumio Kishida’s Cabinet rose to 49 percent as its handling of the COVID-19 situation continued to receive the highest marks since the pandemic started, an Asahi Shimbun survey showed.

Fifty-one percent of respondents approved the Cabinet’s response to the COVID-19 pandemic, matching the figure shown in the survey held in October after Kishida took power and right before official campaigning for the Lower House election kicked off.

The share of respondents who disapproved of the government’s measures against COVID-19 came to 36 percent, a record low, in the latest survey.

Administrations led by Kishida’s predecessors– Shinzo Abe and Yoshihide Suga–never reached a 51-percent approval rating for their responses to the health crisis.

The Kishida Cabinet’s support rate was also buoyed by increasing endorsements from women.

Despite confusion on whether handouts of 100,000 yen ($885) to households with children 18 or younger could be delivered only in cash, not coupons, 50 percent of voters gave a thumbs-up to the Cabinet’s handling of the COVID-19 relief program.

Forty percent disapproved, according to the survey.

The marks for the government’s program were particularly high among voters in their 30s and 40s, the generations raising children eligible for the handouts.

The survey also found that 46 percent endorsed the government’s proposal to expand tax credits for companies that increase their employees’ salaries to a certain extent, while 36 percent were against the plan.

The nationwide survey was conducted on Dec. 18-19 by contacting fixed and mobile phone numbers randomly chosen by computer.

For fixed numbers, 472 valid responses, or 49 percent, were received from 962 households with at least one eligible voter.

The survey contacted 2,000 eligible voters via their mobile phone numbers. Of them, 846, or 42 percent, gave valid responses.

A total of 1,318 valid responses were received.