Commentary: Moon stays active in diplomacy as end of his term approaches

TOKYO — South Korean President Moon Jae-in is staging active diplomacy despite having less than five months to go before the expiry of his term as president.

Following his call in a U.N. speech for a declaration to formally end the Korean War and his moves to align South Korea more closely with China, Moon said on Dec. 13 that Seoul will begin procedures for its bid to join the Comprehensive and Progressive Trans-Pacific Partnership, a giant 11-nation trade pact.

Driving the unusual activity by the outgoing president is Moon’s concern that South Korea might get a conservative government in the presidential election slated for March 9.

Moon spoke last week in a joint news conference with Australian Prime Minister Scott Morrison in Canberra, stating that his latest visit to Australia was to establish bilateral cooperation in minerals and the defense industry.

Moon also said the two countries will share carbon-neutral technologies to achieve net-zero emissions of greenhouse gases and cooperate in the use of hydrogen and space exploration.

“It was unthinkable in the past for a president to go overseas” shortly before retiring from office, said a senior official in the South Korean government.

The visit to Australia was possible because of Moon’s approval rating of nearly 40%, higher than the ruling party’s. This extremely rare situation for a South Korean president about to leave is partly attributable to the unpopularity of the presidential candidates, saving him from becoming a lame-duck leader.

Moon has thus upset the South Korean political community’s shared concept that an outgoing president can hardly adopt new policies that could shackle his or her successor. A health care worker collects a sample from a man at a temporary COVID-19 testing site at a railway station in Seoul on Dec. 8.   © Reuters

Nevertheless, Moon must be feeling anxious as his disapproval rating tops 50%, adding to the numbers of hard-nosed anti-Moon people.

Amid the scarcity of policy debates in the lead-up to the election, the question of whether there should be a change of government is becoming the focal point. Calls for the opposition camp’s taking power outnumber those for the continuation of a liberal government, according to opinion polls.

The resumed spread of coronavirus infections is shaking the Moon administration. The government’s shift to a policy of “living with COVID-19” has resulted in an increase in infections with the new omicron variant. The number of newly infected people recently reached record levels of over 7,000 per day. According to a Gallup Korea survey announced on Dec. 10, the ratio of respondents who voiced support for the government’s coronavirus measures came to 44%, a plunge of 13 percentage points from November.

As the Moon administration has been credited with combating the COVID crisis, the current state of infections may greatly affect the presidential election.

It may surprise people in Japan that Moon’s foreign policy is the second-largest reason for approval of his administration, after its COVID measures. The latest visit to Australia was part of efforts to emphasize his “visible diplomacy.” 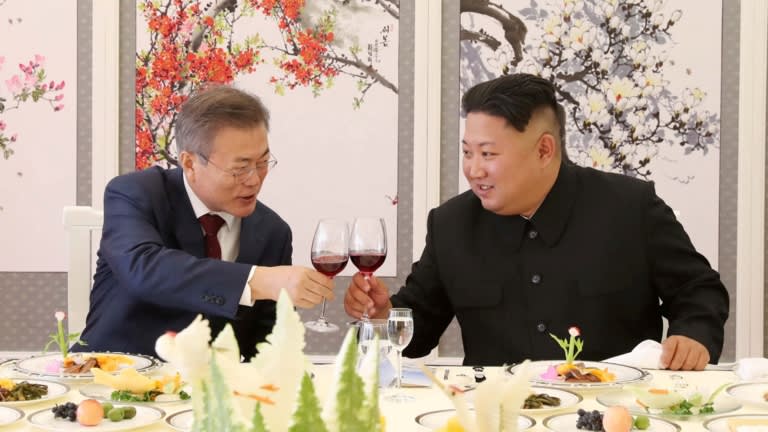 On the occasion of the inter-Korean summit in April 2018, I interviewed citizens in Seoul, finding that most of those who welcomed its Panmunjom Declaration cited the agreement to declare an end to the war during that year as the No. 1 reason for their support. If an end to the war is officially declared, Moon will become “the president who ended a war of some 70 years.”

Kim Yo Jong, the powerful sister of North Korean supreme leader Kim Jong Un, shook the Moon administration in September, saying that another inter-Korean summit and a declaration to end the war would be possible if South Korea showed a stance to “put out a fire.”

In the past, presidents’ approval ratings soared following summits between North and South Korea.

Though achieving an end-of-the-war declaration may be difficult, North Korea’s issuance of such a statement before the start of the Winter Olympics in Beijing in February 2022 should be welcomed, a South Korean diplomatic source said.

The U.S., a signatory of the Korean Armistice Agreement of 1953, sees North Korea as a country that can be negotiated with and should be able to take a reasonable position from the standpoint of potentially reducing security costs, the source said.

With regard to a diplomatic boycott of the Beijing Winter Olympics, South Korea has taken a stance different from Japan, with Moon denying from an early stage that Seoul would consider such an option. This was largely aimed at seeking China’s support in dealing with the North Korean problem, analysts said. China has already told South Korea of its support for the plan to declare an end to the war.

Moon’s decision to announce the launch of procedures needed to join the CPTPP, instead of postponing the move to the next administration, can be seen in the same context as the end-of-the-war declaration.

Given South Korean citizens’ strong wish that their government play important roles in the international community and international organizations, Moon possibly wants to establish a beachhead for South Korea’s participation in the CPTPP before the expiry of his term. A container terminal in South Korea. Moon seeks to establish a beachhead for the country’s participation in the CPTPP.   © Reuters

The Japanese government will deal with the issue by “taking strategic points of view and popular understanding into account as well,” Matsuno added.

In light of Japan’s leading role in the CPTPP negotiations, South Korea considers that Tokyo holds a key to its possible membership in the trade accord. Current Japan-South Korea relations, seen as their worst since normalization in 1965, are casting a shadow over the field of economic cooperation on top of other areas.