Opinion: Solidarity was key to the success of Tokyo 2020 games

Yuriko Koike is Governor of Tokyo.

Even in the midst of this unprecedented adversity with the COVID pandemic still rampant, Tokyo successfully held the Olympic and Paralympic Games Tokyo 2020 this summer.

In order to avoid spreading the virus, we took measures such as holding the events without spectators and conducting thorough daily tests in addition to behavioral management techniques for athletes and Games officials.

We also controlled traffic volume and movement of people during the Games. Despite the complexity of the operations, we could welcome more than 15,000 athletes from over 200 countries and regions. The Games themselves saw many new world records, and I firmly believe that the amazing performances of these athletes helped deliver a sense of courage, hope and excitement to a weary world that sorely needed such positive emotions.

Even athletes told us that “The Games were a great success.” This was only thanks to the incredible cooperation between world governments, athletes, Games officials, medical professionals, volunteers and the citizens of the world. At a time when we were all suffering the wounds of the pandemic, these cooperative efforts deepened the ties of true solidarity. On behalf of the host city, I would like to say arigato — thank you for the support of the global community.

Look back to the Tokyo Games of 1964. Here we saw the development of the Tokaido Shinkansen bullet train and Metropolitan Expressway, which served as steppingstones for Japan’s era of rapid economic growth.

Fundamental networks were built and provided the foundation for Tokyo’s urban infrastructure. These hard legacies of the previous Tokyo Games are still functioning in our daily lives.

More than half a century later, as we hosted the 2020 Games, Tokyo has become a developed city facing a new set of issues. These challenges, including demographic decline and the global climate crisis, have required us to come up with a strategy to leave behind a new soft legacy of social and attitude changes. As these challenges are shared with all of humanity, we hope that the approaches taken in Tokyo will ultimately contribute to global solutions.

Examples include the Japan National Stadium, which was reborn as the main stadium for the Games and is a facility that is harmonized with the environment using the power of nature. Capabilities like capturing winds as a means of cooling, producing energy through solar power and active use of rainwater were all included in the design.

The 5,000 medals awarded to athletes were made from materials recovered from small electronics like used mobile phones collected both domestically and from abroad, most notably from 2024 host city Paris, in what we call “urban mines.” Also, clean-burning hydrogen was used in the Olympic and the Paralympic Flame. The 2020 Games were an event that showed true sustainability to the world.

Tokyo is the first-ever city to host the Summer Paralympics for the second time. In order to realize the Olympic and Paralympic vision of Unity in Diversity, we worked to change our city by combining both hard and soft aspects.

For instance, on the hard side of things, we strongly promoted barrier-free infrastructure. We eliminated stepped sidewalks along 90 kilometers of prefectural road. Even at railway stations, more than 95% of steps have been removed and secondary platform doors have been installed at more than 350 stations. 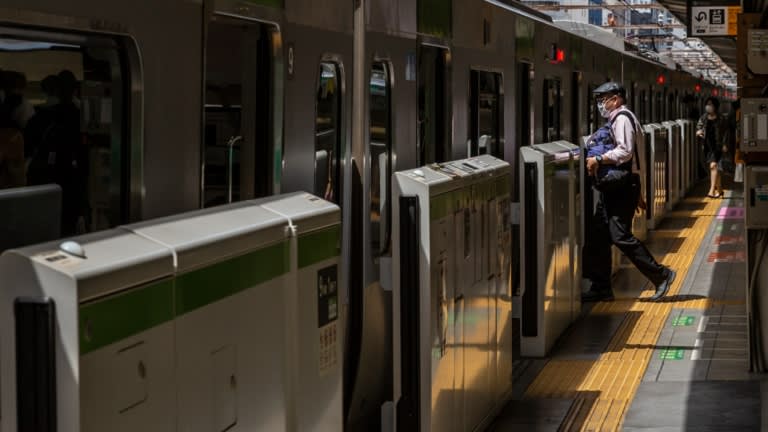 A man gets on a train at Ikebukuro station on June 20: secondary platform doors have been installed at more than 350 stations.   © Getty Images

We will further develop our concept of universal design-based urban development across Tokyo, with the aim of ensuring anyone, including the elderly or those with impairments, can move smoothly and stay in comfort.

In Tokyo, one in four residents will be classified as elderly by 2035, making us the first city in the world with such an aged population. I want to show the world the image of a barrier-free Tokyo as a leading, model city.

On the soft side, we are making efforts to constantly increase diversity and inclusiveness. These Games had the most gender-balanced athlete lineup in history and we also had refugee teams participate. Over 80,000 volunteers of all ages were able to support athletes and Games officials from a wide range of backgrounds and create deeper relationships.

In addition, Olympic and Paralympic education was introduced at all 2,300 public schools in Tokyo in order to deepen students’ respect and understanding of human rights and those with impairments. This includes the Global Friendship Project for youth to learn about a wide range of countries and regions participating in the Games, inviting Para-athletes to lecture at schools and actual competitive events. Tokyo will continue to promote efforts to realize an inclusive society that transcends age, gender, impairment and nationality.

As I have stated on many previous occasions, “the Tokyo 2020 Games cannot be a considered success without the success of the Paralympic Games.” We have been working to popularize Para-sports and continue to promote the creation of an environment where Para-sports can be enjoyed by all. More than 1.35 million people, both individuals and companies, are participating in this endeavor.

Our various efforts have paid off and, at these Games, which were attended by the largest number of Para-athletes in history, we were able to convey the excitement of Para-sports to the world. I feel sure that the excitement generated by the Games will lead to the realization of a truly inclusive society in which differences are transcended through a better understanding of diversity. The promotion of Para-sports is a soft legacy that I hope will stay with Tokyo, Japan and the world.

Cities and nations around the globe continue to battle the virus and its new variants. Even after in a post-COVID world, Tokyo will not just go back to normal and we will not face the future alone. Rather, in addition to working toward a more inclusive society, we will further the concept of a sustainable recovery and build a bright future for our city and cities around the globe.

As we look forwards, the problems we all face, ranging from evolving pandemics to the growing dangers of climate change, must be met and dealt with by many actors working together. With the same sense of solidarity that made the Tokyo 2020 Games possible, we can boldly move forward for a better tomorrow. This, I believe, is the greatest legacy that Tokyo can offer to the world.