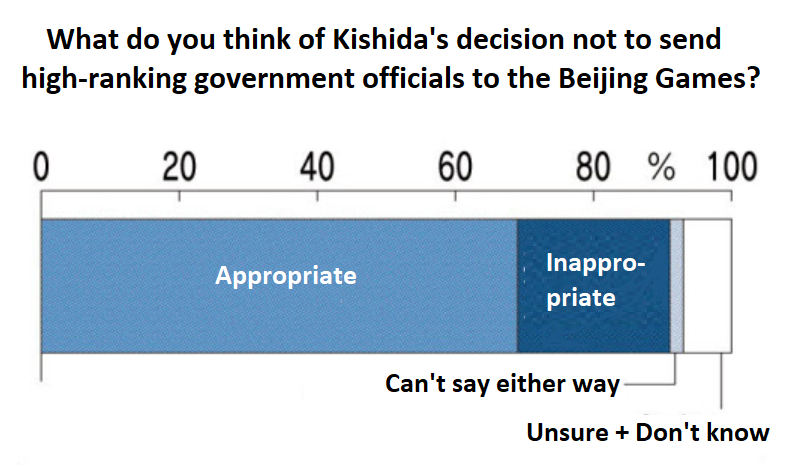 The Nikkei nationwide public opinion poll [conducted on Dec. 24–26] probed views on the government’s decision not to dispatch cabinet ministers and other high-ranking officials to the Beijing Winter Olympic and Paralympic Games scheduled for February 2022. A full 69% of respondents said the decision was “appropriate,” outpacing the 22% who said it was not.

Some 74% of LDP supporters said the measure is “appropriate,” 5 percentage points higher than the overall figure. About 60% of Komeito supporters and slightly less than 70% of the Constitutional Democratic Party of Japan supporters deemed the move appropriate.

Just under 90% of conservatives who cited “constitutional amendment” as a policy issue that they want Kishida to prioritize said the decision is “appropriate.”

Japan has acted in step with the United States and the United Kingdom, which have declared a “diplomatic boycott.” However, Kishida did not describe the move as a protest against China’s human rights issues like the United States has. Rather, the Prime Minister emphasized the move was Japan’s own decision.