TOKYO — On the night of Sept. 29, after losing the leadership race of Japan’s ruling Liberal Democratic Party, hawkish candidate Sanae Takaichi quietly went back to the parliamentary housing in the Akasaka section of Tokyo.

It was still early. At a campaign gathering, Takaichi thanked the lawmakers who had supported her as well as the staff, but she had no other engagements.

“You know, I have no friends,” she joked. While preparing her policy platform for the LDP campaign, the former internal affairs minister stayed cooped up in her apartment for days.

Takaichi, 60, made a strong showing that surprised many and put her on the map. She has called for doubling Japan’s defense budget to 2% of gross domestic product. She has said that it is “absolutely necessary” to ask the U.S. to deploy intermediate-range ballistic missiles on Japanese soil. She has become the face of the party’s right wing.

But in a world where power derives from having many allies, Takaichi will need to build an army of friends within the party if she wants to be a successor to Prime Minister Fumio Kishida.

After the race, Kishida appointed her as LDP policy chief, one of the three most-coveted posts in the party. Here she has maintained her solitary work habits. She comes to party headquarters in the morning, and rarely leaves her office until evening. Takaichi contrasts with other LDP heavyweights, who come and go frequently.

As policy chief, she single-handedly drafted the LDP platform for the October general election.

Former Prime Minister Shinzo Abe, a fellow conservative who supported her in the LDP leadership race, has told Takaichi she shouldn’t try to do too much on her own.

“You delegate policymaking, and by doing so, you make friends,” Abe has advised her.

It was also Abe, her mentor, who quickly shot down rumors that Takaichi might become the all-powerful secretary-general of the party — in charge of elections, personnel appointments and the budget.

“She’s not the type for that,” Abe told people around him. 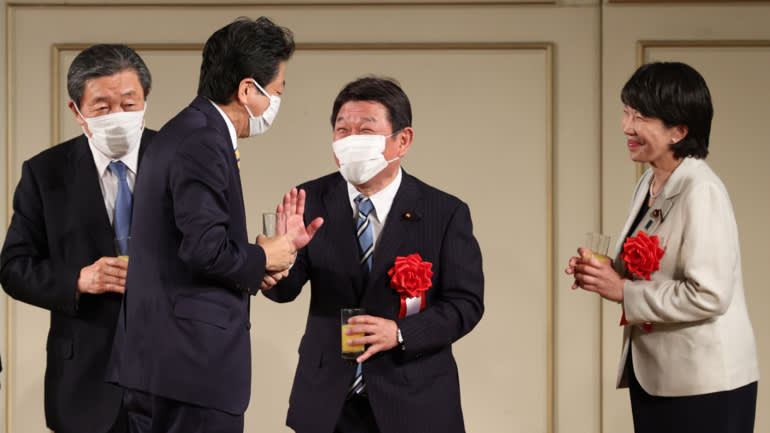 Takaichi has already hit a wall in parliament when dealing with coalition partner Komeito. Part of a recent economic stimulus package involves distributing 100,000 yen ($870) to children under 18. Unable to agree with Komeito counterpart Yuzuru Takeuchi on whether to give the handouts to everyone, including the wealthy, negotiations had to be elevated to the secretary-general level for a breakthrough.

“Margaret Thatcher wasn’t focused on making friends. She stuck to her convictions, and was lifted by allies who agreed with her views,” Takaichi says, holding Britain’s first female prime minister as a role model.

But Thatcher did make an effort to attend study sessions and meals to expand her network ahead of becoming the Conservative Party leader, according to her autobiography. Thatcher recalled how those relationships helped her after she became leader.

The political circumstances around Takaichi may force her to rethink her strategy. Abe, her biggest backer, became the head of his own faction in November. Since the LDP’s factions exist ultimately to help one of their own become party leader, there is no guarantee that Abe will support Takaichi again in future races.

Takaichi originally belonged to the same faction as Abe, the Seiwa Political Analysis Council. But unwilling to support then-faction head Nobutaka Machimura in the 2011 LDP leadership race, she ventured out on her own. Now that Seiwa is the “Abe faction,” Takaichi looks interested in rejoining. But faction elders who know how she left are not so welcoming.

Conscious of such headwinds, when Takaichi was invited as a guest of honor to an Abe faction event on Dec. 6, she made sure to introduce herself in this way: “I am Sanae Takaichi, from no faction.”

“Once in a position of leadership, you begin to see things in a different way,” Takaichi said in her speech, as if to emphasize that she has changed. “The responsibilities are much heavier.”

As for making new friends, one effective formula she has discovered is to use her popularity to help other LDP politicians. Takaichi’s parliamentary office receives as many as 1,000 requests a day from people across Japan wanting to join the LDP. She instructs her staff to connect the applicants to their respective representatives, based on constituencies.

Those on the receiving end of the introductions could not be happier.

“We have a quota of new party members to meet, so this is very helpful,” said a secretary to a lawmaker who had no previous interactions with Takaichi. “We want to repay this favor in the future.”

The LDP policy chief serves multiple positions in the party. Takaichi decided to hand some of those responsibilities to other lawmakers, bringing more politicians into the policymaking process. She also has reached out to several lawmakers who lost their seats in the October lower house election and given them new titles of “special assistant to the policy chief.” They are allowed to attend the party’s study sessions.

Takaichi says she is good at policy but bad at political battles. Yet policy is how battles are fought in Nagatacho, the political district in central Tokyo.

All eyes are on the period after the upper house election next summer. It could be three years before Japan goes back to the polls, if the prime minister does not call a snap election. Who will be in what position during those three years?

Politicians already are aligning themselves under the name of “policy,” to position themselves in the right camp.

On Dec. 1, the LDP’s new Headquarters for Fiscal Policy held its inaugural meeting. The group originally was called the Headquarters for Promoting Fiscal Reconstruction, launched by Kishida when he was policy chief. Instead of aiming to control the budget, the newly minted body will discuss ways to accelerate government spending.

Meanwhile, Kishida has created a separate Headquarters for Promoting the Fiscal Consolidation that reports to the LDP president — himself. Kishida and Takaichi are at loggerheads over austerity measures.

In a Dec. 13 debate at the lower house Budget Committee, Takaichi pressed the prime minister to boycott the 2022 Beijing Winter Olympics. When Kishida replied that he will decide at the appropriate time based on national interests, Takaichi immediately asked him for his definition of “national interests.”

Ahead of the upper house election, Kishida will need to lean on Takaichi’s tremendous popularity among conservatives. But how useful she will be after election day is less clear. She will need to make her mark as policy chief by then.