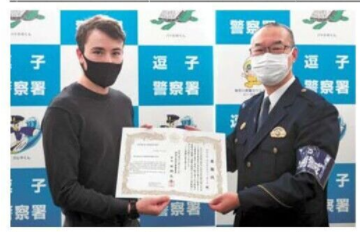 On Dec. 22, the Zushi Police Station handed a letter of appreciation to Christopher Paul DeLong [sp?], a 29-year-old American who works at a company in Zushi City.

On the morning of Dec. 10, a 56-year-old [Japanese] man from Yokosuka City was driving on National Road No. 134 in the city’s Shinjuku 5-chome district when his car turned over and fell into the sea 10 meters below. Christopher, who was on his way back to the shore from stand-up-paddle-boarding, noticed the car and immediately asked a passerby to call for help. Meanwhile, Christopher broke the car window with a stone, checked the man’s condition, and immediately delivered him to police and first responders upon their arrival. The [Japanese] man was taken to the hospital by ambulance. Initially he was suffering from hypothermia, but he later recuperated. He reportedly suffered no major injuries.

Zushi Police Station chief Tabuchi Motoji commended Christopher for “his excellent judgment and courage.” The American said, “I just thought to myself I have to help him!”