Scrambles against China increase five-fold from half year ago 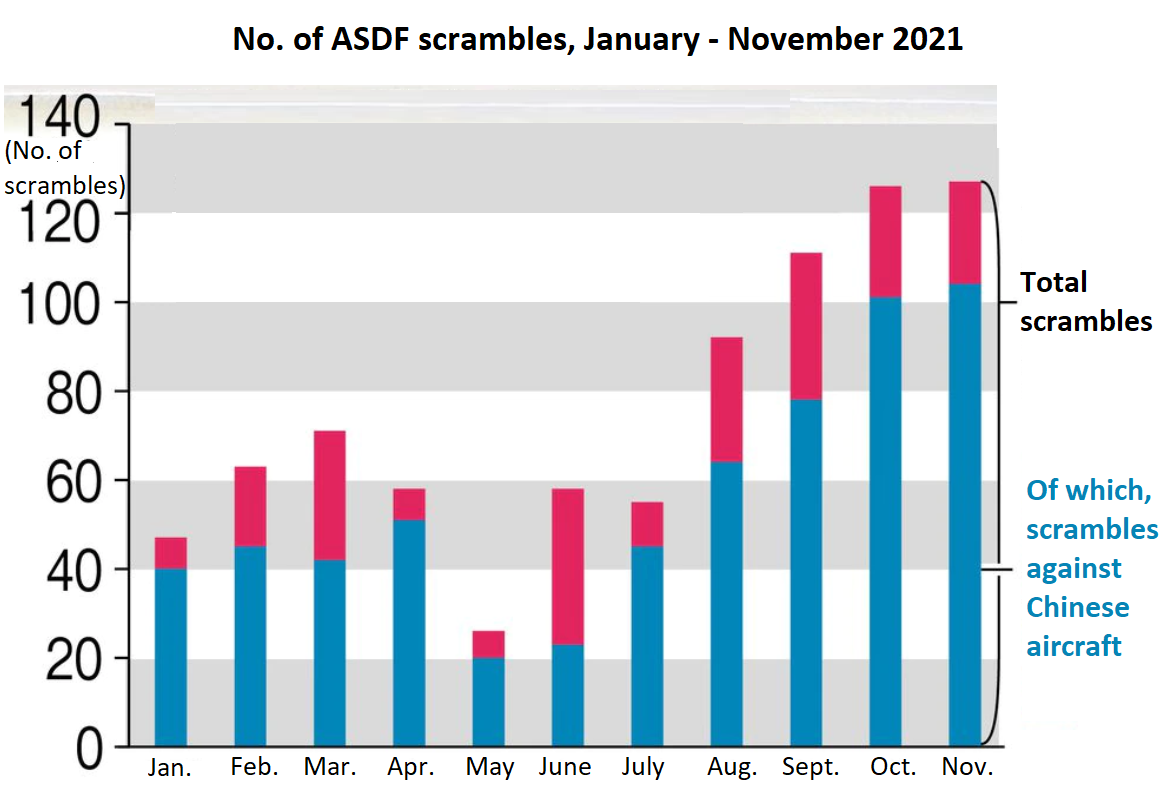 Chinese and Russian military aircraft have been intruding [more frequently] into Japan’s air defense identification zone (ADIZ). As a result, the number of scrambles of Air Self-Defense Force aircraft has risen nearly five-fold compared with six months ago. In addition, the number of Chinese and Russian naval vessels passing through waters near Japan has increased. This kind of activity tends to increase every autumn, the season when Japan and the U.S. hold joint exercises, but joint Chinese-Russian air flights and maritime passages are notably more frequent this year.

A nation’s ADIZ extends beyond its territorial airspace to give the nation more time to respond to airspace violations. Intrusion into the ADIZ is a criterion for scrambling fighters.

The number of Chinese and Russian naval vessels passing through the various straits near Japan also increased in the autumn. In the June-July period, Russian vessels transited nearby straits on four occasions, and no Chinese vessels were spotted. Activity started to rise from late August, and these foreign vessels were spotted 13 times in September. The Chinese Navy’s aircraft carrier “Liaoning” usually only passes through the straits once a year, but in 2021 it passed through the straits in both April and December.

This year, the Chinese and Russian militaries have engaged in notably more joint activities. In October, a joint Chinese and Russian naval flotilla composed of a total of 10 naval vessels circled Japan in a clockwise direction. In November, a total of four bombers from the two nations’ air forces flew an exceptionally long distance, going back and forth from the Sea of Japan to the Pacific Ocean. The government lodged a strong protest, with Defense Minister Kishi Nobuo saying, “[the repeated military drills by China and Russia] were intended as a show of force against Japan.”

From late August through September this year, Japan, the United States, and other countries participated in a large-scale joint training with the HMS Queen Elizabeth’s Carrier Strike Group. Such joint exercises are often held in the autumn, and China-Russia militaries become more active at that time of year to counter them.

Meikai University Professor Kotani Tetsuo, who specializes in security, points out, “Although [foreign militaries’] operation [of aircraft and naval vessels] continues to become more frequent and the scope of their operations continues to expand, Japan would be playing into the hands of Russia and China if it made a fuss over incidents that do not violate international law.” The number of scrambles by the Taiwanese Air Force is also increasing. “We should analyze whether the operation of Chinese military aircraft has changed. For that reason, it would be desirable to share information with Taiwan.”