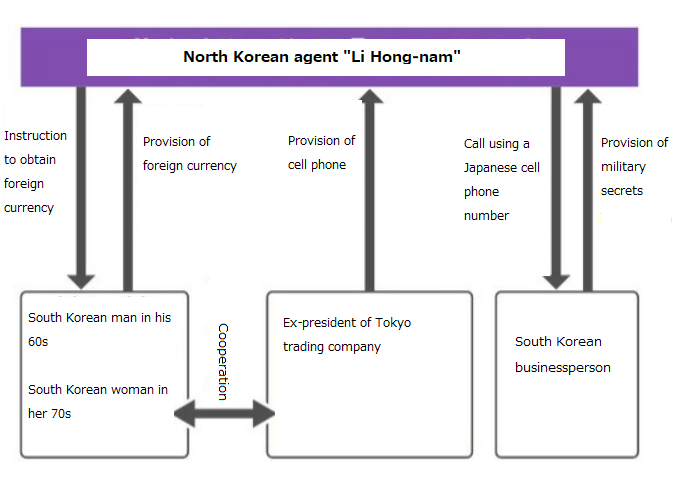 A North Korean spy used a Japanese mobile phone number in 2012 and 2013 to call a South Korean businessperson who provided the North Korean agent with the ROK’s state secrets, including information on military equipment, Tokyo Shimbun learned from investigative sources in Japan and South Korea.

The North Korean agent also instructed another South Korean man and a South Korean woman to engage in activities to obtain foreign currency. The couple was arrested by the Tokyo Metropolitan Police Department (TMPD) last fall on suspicion of violating the Immigration Control and Refugee Recognition Act. Thus a part of the espionage network that North Korea set up in Japan and South Korea was exposed.

The North Korean agent used the pseudonym “Li Hong-nam” (sp?) and operated with China as his base. He is believed to belong to the “Reconnaissance General Bureau,” which is North Korea’s spy agency.

He was the model for a high-ranking North Korean official who appeared in the film “The Spy Gone North: The Man Codenamed Black Venus,” which was released in South Korea in 2018 based on the memoir of a former South Korean agent.

According to investigative sources, the convicted businessperson stated that the North Korean agent “used a Japanese cell phone” to contact him. It was learned that the cellular phone number was allegedly provided by a former president of a trading company in Tokyo.

The president of the company served as the contracting agent for North Korea when the DPRK imported 12 aging submarines from Russia in 1994. According to the corporate registration, the company was dissolved in February 2019.

In addition, a South Korean man in his 60s and a South Korean woman in her 70s, who are executives of a health food sales company in Tokyo, were helping the North Korean agent in earning foreign currency.

In October and November last year, the TMPD arrested the man and the woman for running a company without permission to engage in activity other than their permitted status of residence and entering Japan with fraudulently obtained documents. The prosecutor suspended their indictment.

The South Korean man in his 60s, and the former president of the trading company seem to have a cooperative relationship in the trading business. The two visited North Korea in February 2006 at the invitation of the North Korean agent, sources said.

In response to the Tokyo Shimbun’s telephone interview, the former president said, “I have nothing to say. I’m not even working anymore. I have nothing to do (with the North Korean agent), so  don’t contact me again.”

The fact that the North Korean agent misused a Japanese cell phone number to obtain South Korea’s state secrets and instructed the South Korean residents in Japan to obtain foreign currency reveals that spies can operate with impunity in Japan.

The reason that espionage activities by intelligence agencies and their cooperators can be deterred abroad is that the perpetrators of such operations can be severely punished if they are exposed.

However, Japan is said to be a “spy paradise” because the country has no laws in place to crack down on espionage activities.

A former North Korean agent who illegally landed in Japan on a spy boat in the 1980s and brought back a young man who resided in Japan to North Korea told a reporter, “It was a piece of cake.”

In many cases, Japanese investigative authorities make cases on “separate [unrelated to espionage] charges” such as forgery of documents or violation of the Immigration Control and Refugee Recognition Act.

Most of the cases end up being handled as minor dispositions such as summary indictment, non-prosecution, or the suspension of prosecution.

As North Korea’s economic activities are restricted by strict sanctions imposed by the UN and other organizations, it is expected that the DPRK will become increasingly more active in schemes to obtain foreign currency.

Not only does Japan need to prepare for the Senkaku Islands issue and the “Taiwan contingency,” but the country also needs to review its immediate security issues while paying utmost attention to human rights.

The North Korean agent used a Japanese cell phone number to conduct espionage activities in South Korea, while instructing the South Korean man and the woman to earn foreign currency.

The North Korean agent, who calls himself “Li Hong-nam (sp?),” has developed cooperators in Japan and South Korea and has been conducting espionage activities by “remotely controlling his cooperators.”

Using the title of a high-ranking North Korean official, he has frequently appeared in economic cooperation projects between North Korea and South Korea. He has long been known as a bigwig operative among the relevant authorities in Japan and South Korea.

According to sources who are familiar with North Korean affairs, Li was born in 1954. After graduating from the economics department of the prestigious Kim Il Sung University, he started out in the operations department of the intelligence agency (now the Reconnaissance General Bureau). He mainly operates from his bases in Beijing, Shenyang, and Dandong in China. In order to promote economic cooperation between North Korea and South Korea, he has been in contact with South Korean political, business and government officials under the title of counselor of the “ethnic economic cooperation association” to engage in clandestine operations.

In the 1990s, Li came met Park Chae-seo, an agent of the South Korean intelligence agency whose codename is “Black Venus.” The two are said to have been involved in a project in 2005 to have popular female singers from North Korea and South Korea perform together in an advertisement for a Korean company.

In 2010, the South Korean prosecutors office charged Park with passing military secrets to Li. Park was convicted and imprisoned. Based on Park’s memoirs, a film called “The Spy Gone North: The Man Codenamed Black Venus” was produced in South Korea in 2018 and became a hit.

The South Korean businessperson, who was found guilty in 2015 of violating the National Security Act, provided some of the ROK’s state secrets to Li. The secrets included documents related to video transmission and reception equipment used by the South Korean Navy in its anti-piracy operation off the coast of Somalia in 2011.

The former president of a trading company in Tokyo, who is believed to have provided Li with the cellular phone number, was an intermediary when North Korea imported aging submarines from Russia in 1994. The investigative authorities believe that Li and the former president developed a relationship after the submarine import.

It is a common practice for North Korea to conduct manipulative activities, such as earning foreign currency, through cooperators and companies of such cooperators as front organizations.

The South Korean man and woman arrested by the TMPD last fall on charges of violating the Immigration Control and Refugee Recognition Act are said to have been involved in the trade of marine products with North Korea under the direction of Li, using a health food sales company as a cover.

According to information obtained from investigative sources in Japan and South Korea, the former president of a trading company and the South Korean man involved in the seafood trade were working with Li around 2014 to promote the import of oil from the Middle East to North Korea.

In February, the South Korean media reported that an official of the Korea Gas Corporation (KOGAS) [a South Korean public natural gas company] had contacted Li at a hotel in Vladivostok in the Russian Far East at the end of 2019.

According to the sources, Li asked the official whether it would be possible for KOGAS to buy the Russian gas purchased by North Korea, but as the official replied that it would be difficult, the proposed transaction was not realized.

As foreign trade is restricted due to UN sanctions against North Korea’s nuclear and missile development, North Korean agents’ activities to obtain foreign currency are likely to continue.