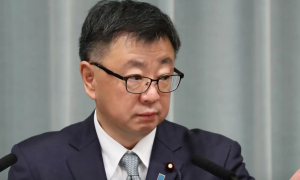 The pick for chief cabinet secretary — the position responsible for reining in Japan’s bureaucracy — was neither Kochi Hagiuda, recommended by former Prime Minister Shinzo Abe, nor Itsunori Onodera, a former defense minister who belongs to the faction led by Kishida in the ruling Liberal Democratic Party. Both had been considered strong candidates.

“I don’t think I have been chosen for my competency,” Matsuno said when asked about possible reasons for his appointment as the top government spokesman at a news conference following the formation of the Kishida cabinet on Oct. 4.

Matsuno is one of the LDP members with the greatest expertise on education policy, and the post of education minister in an Abe cabinet had been his sole previous ministerial experience. “I will try not to cause the prime minister any trouble,” Matsuno said at the news conference, showing a stance clearly different from that of Yoshihide Suga, who had displayed uncommon shrewdness as chief cabinet secretary before succeeding Abe as prime minister.

He has called himself a jingasa politician, a faction member who strives to expand its power for its leader. The term “jingasa” derives from the helmets worn by soldiers during the Warring States period (1467-1568) who fought as the “hands and feet” of senior samurai.

Matsuno was born in Kisarazu, Chiba Prefecture. Wishing to become a film director, he enrolled in Tokyo’s Waseda University, which has produced many movie figures, including Shohei Imamura, a renowned film director and two-time winner of the Palme d’Or, the highest prize awarded at the Cannes Film Festival.

But as the film industry was in a deep slump when Matsuno graduated from Waseda, he was unable to find a job and instead joined the advertisement office of Lion, a leading Japanese manufacturer of household products. “There’s a difference between a two-hour movie and a 30-second commercial, but it’s the same visual work, so I thought it was OK for now,” he recalled.

At Lion, Matsuno planned commercials, wrote “catch copy” and made preparations for shooting commercials. He learned about the real world through negotiations with the product planning section at Lion’s corporate headquarters and at television stations.

Rationality is the principle Matsuno acquired while working as a company employee. “I am neither a rightist nor leftist, but a neutralist. I have no ideology,” he has said.

After arranging a highly successful TV commercial, Matsuno got a proposal from Lion to go to graduate school. However, he instead chose to go to the Matsushita Institute of Government and Management, a private educational institute that was set up by Panasonic founder Konosuke Matsushita, who wanted to educate Japan’s future leaders, and has become well known for producing politicians.

Matsuno thought that since it was so interesting to see how his concepts could change people’s lives in even a small way through commercials, it would be still more interesting to propose bigger concepts that could make society better through politics. Thus he applied for the open recruitment of election candidates by the LDP’s Chiba chapter in 1995.

Matsuno began to draw attention in Japan’s political community — known as Nagatacho, from the district in Tokyo’s Chiyoda Ward where the Diet building and the prime minister’s residence are located — in 2017, 17 years after first being elected to the House of Representatives, after Abe named him as one of four lawmakers expected to someday head the LDP faction that was led by Hiroyuki Hosoda.

Chief Cabinet Secretary Hirokazu Matsuno, left has said at the news conference, “I will try not to cause the prime minister any trouble” , showing a stance clearly different from that of Yoshihide Suga, who had displayed uncommon shrewdness as chief cabinet secretary before succeeding Abe as prime minister.

Abe thus put Matsuno on a par with such faction members as Hakubun Shimomura, 67, and Tomomi Inada, 62, seen as close aides to the prime minister. “Why Matsuno?” was a common reaction in Nagatacho to Abe’s remark at a meeting of the faction, which he now leads. Kishida’s choice of Matsuno as chief cabinet secretary aroused the same reaction.

In Nagatacho, full of politicians jealous of others’ popularity and promotions, the ability to avoid drawing colleagues’ suspicions is important for achieving a successful career. While all 465 members of the lower house are in principle competing for the post of prime minister, Matsuno stepped on the ladder of promotion without being noticed.

Kishida too had already been paying attention to Matsuno. The late Yoshio Mochizuki, who had served as the Kishida faction’s secretary-general as part of his efforts spanning more than 20 years to make Kishida prime minister, was a bridge between him and Matsuno.

When Kishida became chairman of the LDP’s Policy Research Council in 2017, he picked Matsuno as his deputy. Kishida became close to Matsuno and other members of the Hosoda faction — which is now the Abe faction — and they met over dinner from time to time.

Matsuno’s rise to the fore is partly attributable to his position in the faction. Though its roots are traceable to Abe’s grandfather and former Prime Minister Nobusuke Kishi, the faction was founded by former Prime Minister Takeo Fukuda. It is thus split between members close to Abe and those associated with the late Fukuda — many of whom, like Hosoda, are veteran LDP lawmakers. The two groups adopt different policy lines.

Although belonging to the Fukuda group, Matsuno, known for his balancing skills, was chosen as the faction’s secretary-general, effectively responsible for bringing its groups together. This gave Matsuno a certain influence within the faction that Abe, who had stepped away from the faction while prime minister, could not ignore in order to proceed with his return to the faction.

Matsuno supported Kishida in the LDP presidential election in September. Although Abe sought faction-wide support for Sanae Takaichi, 60, many veteran members of the faction, including Hosoda, sided with Kishida. Abe called for Kishida to appoint Hagiuda as chief cabinet secretary, but the new prime minister chose Matsuno.

Matsuno has rapidly climbed up the ladder of promotion in the LDP and is now tasked with managing the Kishida cabinet.

Matsuno holds two news conferences a day. In preparing for them, he often simply asks questions about briefs prepared by his assistants in the secretariat, such as how to pronounce place names, for his own reference when he answers questions from reporters.

As in the political community, Matsuno keeps a distance from bureaucrats as well. “My job is to create favorable working environments for government ministries,” he has said. This is in stark contrast to Suga’s fearmongering against officials when he was chief cabinet secretary, wielding his personal authority.

However, Matsuno displayed a rare burst of anger to officials from the Ministry of Land, Infrastructure, Transport and Tourism at a Dec. 1 meeting of the government’s coronavirus task force over dealing with the COVID-19 omicron variant.

At the end of November, the ministry had asked international airlines to temporarily stop accepting new reservations for all flights arriving in Japan. The restriction, affecting even the return home of Japanese citizens, was introduced before Matsuno became fully aware of it.

“Report accurately! Lots of returnees will be affected!” he shouted to the officials.

Abe, while prime minister, described Suga as “Musashibo Benkei,” a 12th-century warrior monk known for sacrificing himself to protect his master, Minamoto no Yoshitsune. As chief cabinet secretary, Suga shielded Abe from reporters’ questions, even on personal scandals such as Moritomo Gakuen, in which Abe allegedly was involved in a fraudulent school land deal.

Matsuno is a rarity in Nagatacho in that he has connections to both Kishida and Abe. How he will use his position to his advantage and work as chief cabinet secretary is a matter of great interest.