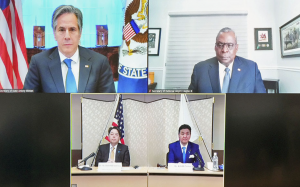 All networks reported on the “2+2” meeting conducted virtually between Japan and the United States on Friday morning (Japan time), noting that it was the first U.S.-Japan 2+2 session held under the Kishida administration. NHK said Secretary of State Blinken, Secretary of Defense Austin, Foreign Minister Hayashi, and Defense Minister Kishi released a joint statement after the meeting in which they shared concerns over China and resolved to work together to deter and, if necessary, respond to destabilizing activities in the region.

Secretary Blinken was shown saying: “Our alliance has never been more crucial to realizing a shared vision for a free and open Indo-Pacific.” Secretary Austin was shown saying: “This framework will include … optimizing our alliance force posture to strengthen deterrence.” Foreign Minister Hayashi was shown saying: “It is more important than ever that Japan and the United States are united and exhibit leadership as both nations share strategic interests and universal values.” Defense Minister Kishi was shown saying: “I hope to review the progress made by Japan and the United States in their respective efforts and the results of Japan-U.S. cooperation since the last 2+2 and to have wide-ranging discussions on the direction toward strengthening the alliance.”

The network added that the United States expressed opposition to any unilateral action that seeks to change the status quo or to undermine Japan’s administration of the Senkaku Islands, and reaffirmed that Article V of the U.S.-Japan Security Treaty applies to the Senkaku Islands. The officials also reportedly shared concerns about human rights issues in Xinjiang and Hong Kong, confirmed the importance of peace and stability in the Taiwan Strait, and expressed concerns over North Korea’s advancing nuclear and missile development activities and confirmed the need for an immediate resolution of the abductions issue. The network added that Japan also expressed its resolve to examine all options necessary for national defense including capabilities to counter missile threats. The network also highlighted the agreement between the two governments to conduct a joint analysis focused on future cooperation in counter-hypersonic technology.

Meanwhile, Hayashi and Kishi strongly urged the U.S. side to strengthen measures against COVID-19 at U.S. bases in Japan, including restrictions on outings, to dispel the concerns of local residents. The U.S. side reportedly said they will take every possible measure.