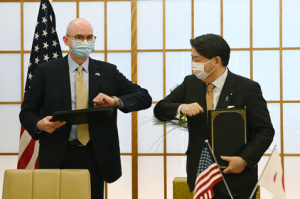 NHK reported in its noon news program that Embassy Charge d’Affaires Greene and Foreign Minister Hayashi signed a new special agreement on Japan’s share of the cost of hosting U.S. forces in the country at the Ministry of Foreign Affairs today. The network said that the existing agreement is set to expire at the end of March and that Japan will be responsible for shouldering about 1.55 trillion yen ($13.3 billion) of the cost for five years starting in fiscal 2022, or 211 billion yen ($1.8 billion) annually, up about 10 billion yen ($86 million) from fiscal 2021, under the new agreement. The broadcaster said that while reducing Japan’s share of utilities costs for bases in stages, Japan’s overall share of the cost will increase as it will cover a newly added item for joint training between the SDF and the U.S. military. The network added that the GOJ is hoping to strengthen the U.S.-Japan alliance through what it now calls “the budget to enhance the resilience of the alliance,” which used to be known as the “consideration budget.”