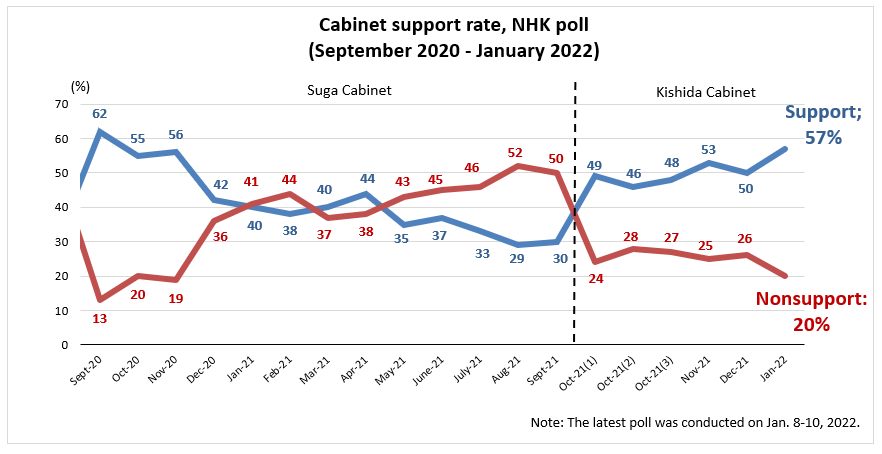 According to the January 2022 NHK public opinion poll, 57% of respondents said they support the Kishida Cabinet, up 7 percentage points from the survey conducted last month. Nonsupport dropped by 6 points to reach 20%.

NHK conducted a nationwide survey over the three-day period of Jan. 8–10, 2022, on a computer-aided random digit dialing (RDD) basis and targeted people aged 18 or over with calls placed to landline and mobile phone numbers. Valid responses were received from 1,219 of the 2,150 people polled. The valid response rate was 57%.

The government has imposed a quasi-state of emergency on Okinawa, Yamaguchi, and Hiroshima Prefectures. A plurality of 58% of pollees said the measure should be expanded to other areas, while 29% said such a move is not necessary.

To secure medical services for those with the Omicron variant of COVID-19, the government revised its earlier decision to hospitalize all those with Omicron who live in areas where Omicron is spreading rapidly and decided to allow Omicron patients to recuperate at home or designated facilities. Asked for their views on this, 12% said they “rate it highly,” while 56% said they “have a somewhat positive view of it.” Meanwhile, 22% said they “do not rate it very highly,” and 5% said they “do not have a positive view of it at all.”

Asked about Japan’s decision not to send a government delegation to the Beijing Winter Olympics and Paralympics, which are scheduled to start next month, 61% said they backed the decision, while 21% said they did not.

This year marks the 50th anniversary of the normalization of diplomatic ties between Japan and China. Asked how they think this bilateral relationship will develop in the future, 5% said that ties will improve while 24% said they will worsen and 62% said they do not know.

Nations around the world are stepping up their measures to address global warming, and Japanese automakers are focusing on the development and sale of electric vehicles (EVs). Asked if they think EVs will become popular in Japan, 62% said they will while 26% said they will not.

[Translator’s note: Two questions about ensuring stable succession the Imperial succession and one question about wages were omitted.]