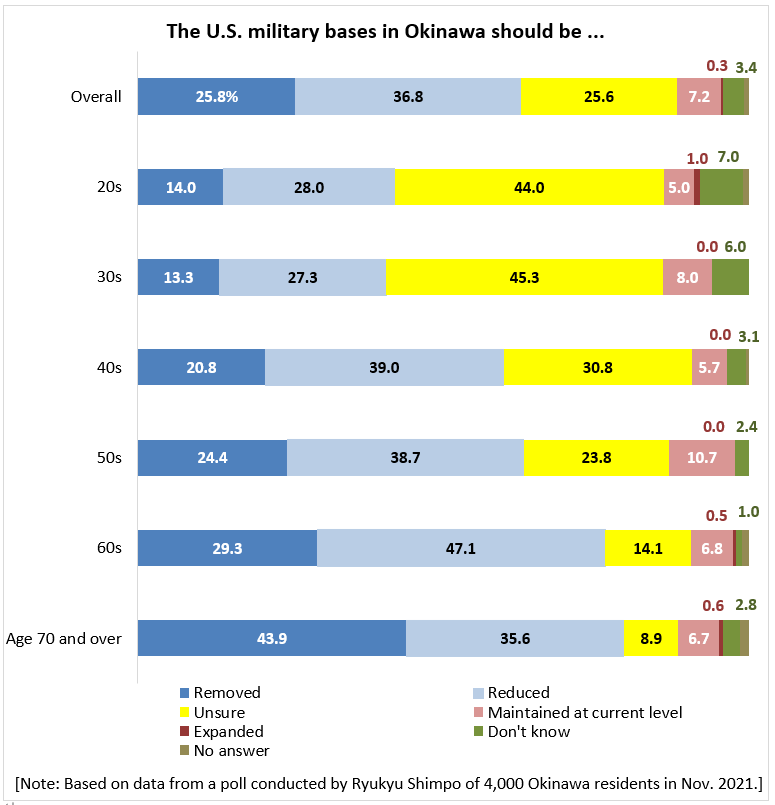 How do Okinawans view the U.S. forces in Japan, the Self-Defense Forces (SDF) bases, and the passing down of the experience of war to future generations? The results of the 2021 Ryukyu Shimpo Survey of Prefectural Residents offer a glimpse of the complex emotions Okinawans have regarding the U.S. bases. The survey also reveals that most residents believe the experience of the Battle of Okinawa should be passed down to future generations.

Asked to name issues facing Okinawa today and given a list of responses to choose from (up to three responses permitted), 74.5% of residents said “low income,” making this the most frequently given response for the fourth consecutive survey since the 2006 poll. Regardless of age group and geographical area, most Okinawa residents see income level as problematic, and the percentages have increased substantially.

Looking at the responses to the two abovementioned questions, Professor Emeritus Hoshino suspects that “those with a strong interest in [U.S.] base issues have a strongly negative view of them while those with little interest are unsure about how they should be handled.” At the same time, he noted that Okinawans’ views on the U.S. military change with the number and types of incidents and accidents that occur and pointed out that trends should be monitored going forward.

Oshiro Shoko (41), part-time lecturer at Okinawa International University, analyzes the results of the question about passing down to future generations the experience of the Battle of Okinawa and the findings on the question about views on the U.S. bases in Okinawa.

Yet, few respondents in their 20s or 30s said that the U.S. bases in Okinawa should be “removed” or “reduced,” and the most frequently given response in these two age groups was that they are “unsure how the U.S. bases should be handled.” Lecturer Oshiro sees this as an indication that Okinawans in the younger age group view the Battle of Okinawa as separate from the U.S. bases. She points out that “the connection between the Battle of Okinawa and the U.S. bases should be made when relating the experience of the battle and reflecting on the history of the Okinawan people, who ‘supported’ Japan’s war of aggression.”

The majority of all respondents said that they are “unsure” about how they view the SDF bases, with this trend being strongest among the younger age groups. Oshiro comments: “Residents who had their land expropriated for the U.S. military bases are in a situation where their communities have been destroyed and rebuilding is hard. This relates to the SDF base issues on Ishigaki, Miyako, Yonaguni, Kitadaito, and Amami Oshima islands.”

[Polling methodology: For the [2021] survey, Okinawa was divided into five geographical districts, 17 municipalities were selected from them, and 100 locations were further selected based on the population ratio. Based on the population in each location, pollees were randomly selected from the registry of voters. The survey was conducted of a total of 4,000 prefectural residents age 20 or over. Questionnaires were sent out on Nov. 1, and responses were received from 953 people by postal mail or via the online questionnaire by the deadline of Nov. 24.]