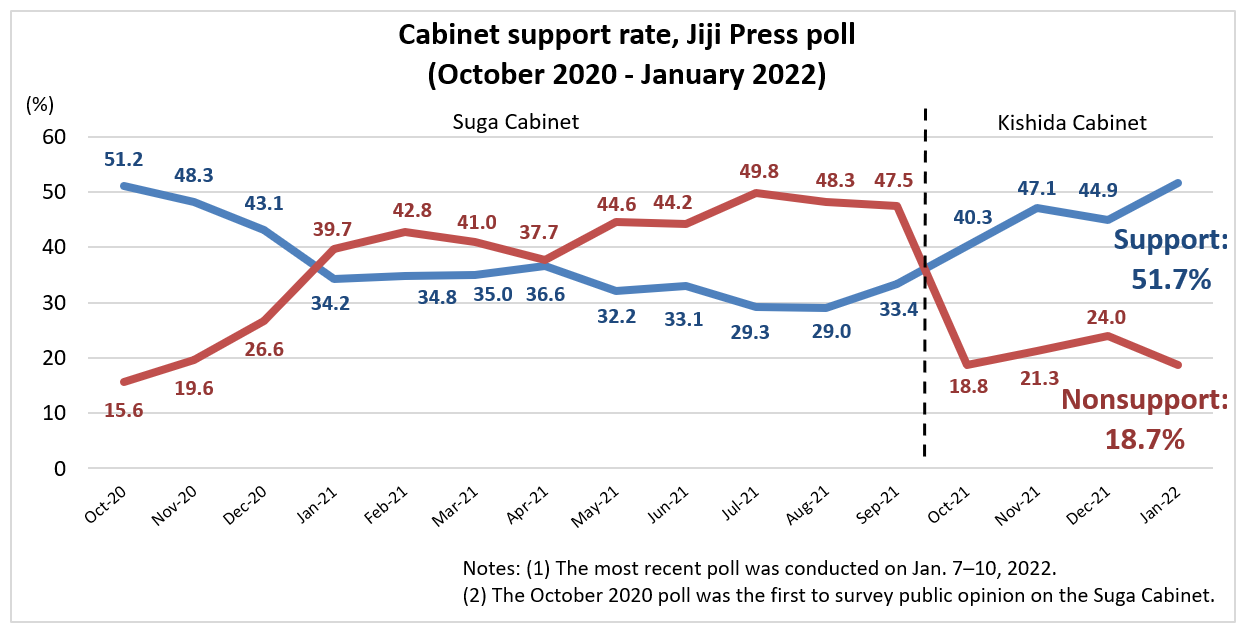 The approval rate exceeded 50 pct for the first time since the launch of his administration in October last year.

The disapproval rate fell 5.3 points to 18.7 pct. The proportion of people who said neither or that they do not know came to 29.6 pct, down 1.5 points, according to the survey, conducted for four days through Monday.

During the survey period, new cases of the omicron coronavirus variant began to soar in Japan.

But public support for the Kishida cabinet increased apparently thanks to its novel coronavirus measures. In addition, Kishida’s stance of providing careful explanations to the public is likely to have given a better impression than the attitudes of his two immediate predecessors, Shinzo Abe and Yoshihide Suga.

The proportion of respondents supporting the coronavirus measures of the Kishida administration stood at 45.2 pct, down 0.5 point, while disapproval came from 31.4 pct, down 2.1 points. Those who said neither or that they do not know accounted for 23.4 pct, up 2.6 points.

On the reasons for supporting the Kishida cabinet, with multiple answers allowed, 20.0 pct said there is no other person suitable to be prime minister, 16.2 pct said they have a good impression of him, and 11.9 pct said they trust him.

Of those disapproving the Kishida cabinet, 9.0 pct said they expect nothing from his cabinet, 5.9 pct said its policies are bad, and 5.5 pct said they do not support his Liberal Democratic Party.

The LDP saw its public support rate fall 0.8 point to 25.6 pct. The support rate came to 4.3 pct for Nippon Ishin no Kai (Japan Innovation Party), down 0.6 point, and 4.0 pct for the Constitutional Democratic Party of Japan, down 1.0 point.

Public support stood at 3.0 pct for Komeito, the LDP’s coalition partner, 1.6 pct for the Japanese Communist Party, 0.8 pct for Reiwa Shinsengumi, 0.7 pct for the Democratic Party for the People, 0.4 pct for the Social Democratic Party and 0.2 pct for NHK to Saiban Shiteru To Bengoshiho 72 Jo Ihan De, a single-issue party critical of public broadcaster NHK, or Japan Broadcasting Corp.

The share of respondents with no particular favored party came to 57.4 pct.

The interview survey covered 2,000 people aged 18 or over. Valid responses came from 64.6 pct.