BEIJING — Friction over trade and security between the U.S. and China has now spilled into the realm of ideology such as democracy, freedom and human rights. Countries around the world — whether democratic or autocratic — face widening economic and social divides, Japan included. Which camp wins the ideological contest will be based on how well the different political and social systems deliver solutions while maintaining growth.

An agricultural village located deep in the interior of China offers a glimpse into China’s gongtong fuyu, or common prosperity, an idea advocated by President Xi Jinping to eliminate the divides.

About an hour’s drive from Yinchuan, the capital of the Ningxia Hui Autonomous Region in the northwest corner of the country, lies a huge residential area, spread out in a neat grid. The area is called Minning Town, one of only a handful of agricultural communities that are home to a large number of young people and children. When visiting, I saw elderly people dancing in a public square to a song lauding the Chinese Communist Party while children walked hand in hand with young parents to a school liberally peppered with CCP’s slogans.

The town was built on a flat, empty plain in 1997 for settlers from a mountain village 300 km away. At the time, the village was recognized as one of the poorest in the country and had been designated by the United Nations as “uninhabitable to humans.”

Xi, then deputy party secretary of Fujian Province, led the project to build Mining Town. As part of the central government’s program to fight poverty nationwide, Xi’s team completely bypassed the provincial government in Ningxia to get the job done.

Xi decided to relocate the people of the village after seeing how they were living in the poorest of conditions in the village himself, using money provided by the Fujian provincial government along with well-funded companies and financial institutions in the province.

The future president refocused the livelihoods of the displaced villagers into cultivating mushrooms, producing wine, and developing other businesses. Minning Town — a name coined by Xi — started as a tiny outpost but has since blossomed into a town with a population of 60,000. Evidently still attached to the town he helped establish, Xi has continued to visit even after becoming vice president and president of the nation.

“We used to have no water or power and lived in houses made of mud,” said a farmer who met the leader. “We thank President Xi for our present life.” 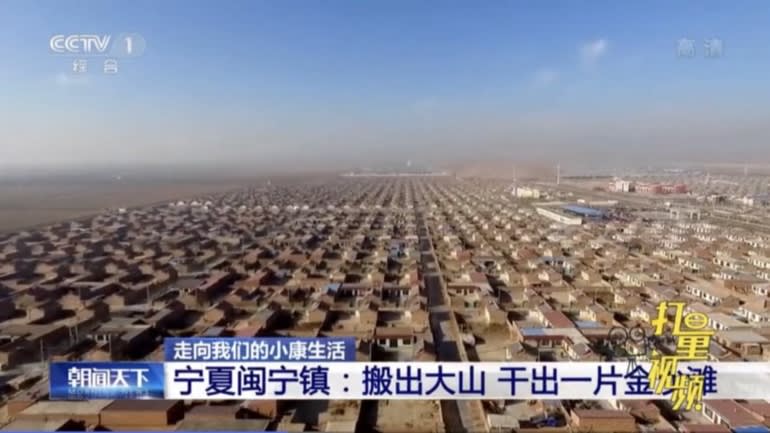 With everything perfectly laid out like a theme park, Minning Town might aptly be referred to as Xitopia, as it seems to be the leader’s vision of utopia from 25 years ago. “Don’t forget President Xi when you become wealthy,” a sign posted at the center of the town reads, as if to reflect Xi’s pride in reducing poverty under his watch.

Although the idea of common prosperity is often criticized as a pipe dream by some of the president’s detractors, the success of Mining Town may have boosted Xi’s confidence that he is on the right track.

Meanwhile, in the democracy camp, U.S. President Joe Biden was elected on pledges that are similar to Xi’s goal of common prosperity, such as taxing the rich. But Biden has yet to make good on his campaign promises.

In December, the U.S. president hosted the Summit for Democracy. However, it fell short of discussing solutions to the challenges common to democracies. The summit was even criticized by China, which said that an ideal democracy neither creates social divides nor perpetuates social stratification and profit, and that American politicians represent interest groups rather than voters and national interests. China also noted that U.S. politicians rarely fulfill their campaign pledges.

Obviously, it is ridiculous for China — which shows a total lack of regard for human rights and freedom of speech and religion — to talk about democracy. But can the U.S. refute China’s claims? Few say that Biden has seriously dealt with America’s problems, though they have been evident for many years.

But does Japan need to explore a new path in the first place?

“Japan is the only country in the world that has succeeded in socialism,” said a Chinese financial heavyweight half jokingly to me some time ago. While achieving high economic growth, Japan has indeed created an egalitarian society where all Japanese were said to be middle class and who still have widespread access to education and health care. In addition, the health insurance system in the country is seen as a miracle by other nations, with the number of hospital beds per population remaining one of the highest in the world.

In other words, Japan has already achieved something that Xi’s utopia is still searching for. Hence, what Japan needs to do is to analyze why its own “common prosperity” has developed systemic fatigue and seems to have come to a standstill as economic growth slumps.

Japan has fallen far behind the U.S. and China in terms of innovation despite having maintained its neoliberalism posture that pursues economic growth through free competition. Now Kishida advocates a shift from neoliberalism. But if he wants to achieve a virtuous cycle of economic growth and wealth distribution, what he must do first is to find out why innovation has hit a brick wall under neoliberalism.

The Great Reset is a global movement to revamp democracy and liberalism for the sake of building a better society. Making full use of its state authority, China may find solutions to challenges before other countries. But it could be headed into a dystopian future that seizes wealth from the affluent while continuing to ignore basic freedoms and human rights.

Japan has the potential of offering real solutions to the world, with it being far closer to a utopia than the Xitopia of China’s Mountain Town.