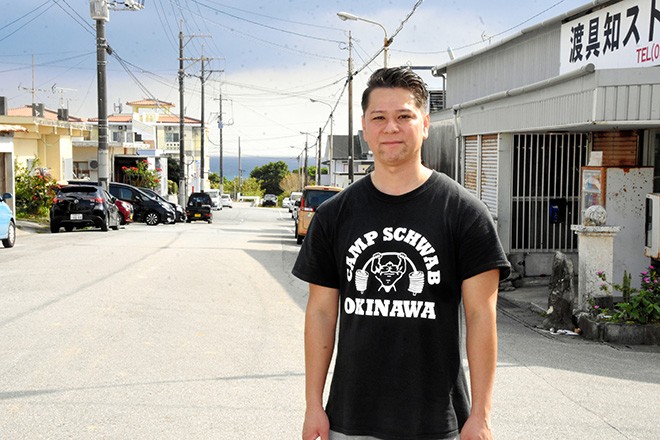 NAGO, Okinawa Prefecture—Munetsuka Kayou was quietly drinking beer at a “snack” bar here when he heard music and English-speaking voices emanating from a nearby drinking establishment.

U.S. military personnel, apparently from the nearby U.S. Marine Corps Camp Schwab, were celebrating the Christmas holidays on the night of Dec. 23. And many of them were not wearing masks.

“An infection cluster can occur from that,” said Kayou, 38, who works at U.S. military bases.

Kayou said about the U.S. personnel, “They might be enjoying a sense of liberty, free from daily drills, but I want them to understand how nervous we are.”

During the previous week, Okinawa Governor Denny Tamaki requested the U.S. bases to order their personnel to refrain from going out.

Kayou looked down at his drink and said, “We are not even told to wear masks at the base.”

The more infectious Omicron variant of the novel coronavirus started spreading among Okinawa residents near U.S. military bases at the end of 2021.

It also became known that the U.S. military had eased COVID-19-related border controls and restrictions for its personnel without telling the Japanese government.

Tamaki said the variant was “spilled from U.S. military” and led to the recent infection surge in the prefecture.

Kayou said he has been more frustrated at the central government.

“When a problem occurs, it is always Japan that makes a compromise,” he said.

Kayou also said he is not sure if the central government’s protest over the novel coronavirus “has resonated with” the U.S. military.

GREW UP WITH U.S. BASES

Kayou used to deejay abroad and worked at a trading company handling paint in Nagoya.

He returned to his hometown, the Henoko district of Nago, five years ago and started working at U.S. bases.

Japanese workers at U.S. military bases are employed by the Defense Ministry. Kayou said he was attracted to the job security and the monthly pay of 200,000 yen ($1,740).

“The wage standard in Okinawa is low, so employment at a base is comparatively popular,” he said.

His work includes selling protein at a gym inside Camp Schwab and working at an automobile repair shop of Camp Foster, which is located in the central part of the main island of Okinawa.

He also runs a ramen shop targeting America troops in Henoko on weekends.

He started the business because he “felt sorry for the soldiers when restaurants voluntarily shut down due to the pandemic.”

One dish called “spicy ramen,” which is full of backfat and hot peppers, is particularly popular.

Some soldiers have contacted Kayou through social media after they returned to the United States and said: “I want to eat it one more time. Tell me the recipe.”

Kayou said many U.S. personnel become interested in Japanese culture, and they often observe how he cooks and are delighted to learn the Japanese language.

U.S. troops have long been a part of Kayou’s life. His father was a fisherman in Henoko and often invited American soldiers to his home for meals of his freshly caught fish.

When Kayou was in elementary school, he and other children in the community were invited to a military base for a Christmas party, where a soldier dressed as Santa Claus gave them candies.

“Soldiers would get drunk and get in fights, but I don’t associate them with crimes. I feel closer to them,” he said.

Since Jan. 9, the prefecture has been under the pre-emergency measures to stop the latest surge in infections. The central government and the U.S. government have also agreed to start work to ban military personnel from going out.

“Each member of the U.S. military is a good person, But I feel the coronavirus is very annoying,” Kayou said.

Campaigning for the Nago mayoral election has kicked off, but Kayou, who is a Chatan resident, cannot vote for the leader of his hometown.

He said he feels sad that the ocean off Henoko where he played when he was a child is being reclaimed for a new U.S. military base.

He said he feels the central government will carry out the relocation project no matter what.

“I’ll just have to see how things go,” Kayou said.

Although he wants U.S. bases to implement thorough infection measures, he doesn’t want them to go away.

“Even with mayors and governors who oppose to the relocation, the construction work has not been stopped. If nothing changes and the town stagnates, the mayor’s job is, preferably, getting money from the central government,” he said.