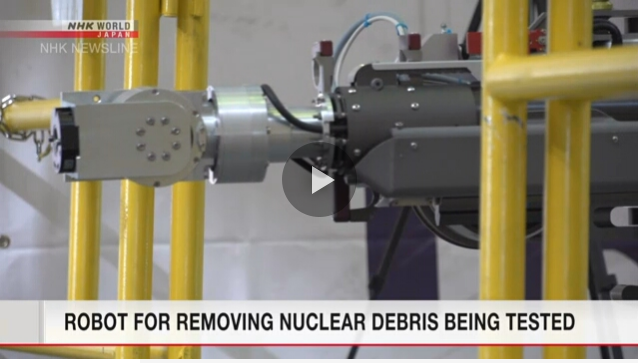 Testing is underway for a robotic arm designed to remove fuel debris from one of the damaged reactors at the Fukushima Daiichi nuclear power plant. Developers have released footage from the testing.

Tokyo Electric Power Company plans to use the British-made device measuring about 22 meters long and weighing around 4.6 tons to remove fuel debris from the plant’s No.2 reactor.

Engineers have been testing the arm at a facility in Kobe City, western Japan, since last July. The tests include checking whether it can be extended correctly.

They say they’re also conducting training for moving the device through a pipe with a diameter of about 50 centimeters that leads into the reactor’s containment vessel.

Engineers plan to attach a metal brushlike object to the end of the arm to collect the debris.

The facility’s No.1, 2 and 3 reactors suffered meltdowns following a major earthquake and tsunami in March 2011.

Removing the extremely radioactive debris is thought to be the biggest challenge in decommissioning the plant.

TEPCO and Japan’s government plan to start work to remove fuel debris from the three reactors with No.2, as a survey of it yielded the most detailed data.

Testing of the arm is in its final stage. Once it is complete, the device will be sent to Naraha Town near the plant and used by workers to train using a mockup of the reactor for about six months.

Official Hosoe Fumihiro of one of the developers, Mitsubishi Heavy Industries, says the attempt is the first of its kind and extremely difficult. But he says he wants to overcome technical challenges step by step.

Meanwhile, TEPCO postponed a probe of the inside of the No.1 reactor scheduled to start last Wednesday, citing mechanical problems. It has yet to be decided when the survey will start.