Roundup of newspaper editorials on Japan-U.S. “2-plus-2” 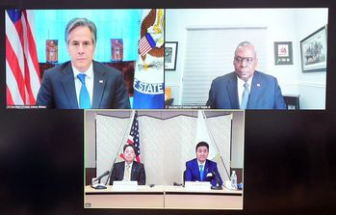 The foreign and defense ministers of Japan and the United States held a Security Consultative Committee (two-plus-two) meeting for the first time since Prime Minister Kishida Fumio took office. They clearly indicated their intention to counter China’s attempt to “change the status quo by force” by strengthening the alliance. While the Sankei Shimbun and the Yomiuri Shimbun lauded the statement and called on Tokyo and Washington to specifically enhance their deterrence and response capabilities against China, the Asahi Shimbun expressed concern that it would provoke China and heighten tension.

The meeting was held online and concluded with a joint statement. In the previous joint statement issued in March last year, Japan and the United States played up their tough stance against China, criticizing it by saying “its behavior is inconsistent with the existing international order” and expressing serious concerns about the human rights situation in Hong Kong and the Xinjiang Uyghur Autonomous Region. Further, the allies noted the “importance of peace and stability in the Taiwan Strait” in the statement.

The latest joint statement adhered to these perceptions and took them a step further by describing how the alliance should deal with China.

Sankei wrote: “It is noteworthy that in the joint statement, Japan, and the United States declared, with China in mind, that they will ‘work together to deter and, if necessary, respond to destabilizing activities in the region.’ It is also important to note that the two countries declared they will ‘fully align’ their security strategies and ‘will together prioritize their goals.’” It also said that the two countries clearly state that they will ‘cooperate with all entities’ that share the values of freedom, democracy, etc. This can be interpreted as possible cooperation with Taiwan, which Japan and the U.S. do not recognize as a state.” The paper also went on to say, “Through the joint statement, Japan and the U.S. showed that if China attempts to annex Taiwan, which is a free and democratic island, Japan and the U.S. would counteract the attempt both diplomatically and militarily.”

Japan told the United States that it will examine various options to counter missile threats, including the acquisition of the capability to attack enemy bases. Japan also reiterated the resolve that it expressed last March to fundamentally reinforce its defense capabilities to bolster its national defense and contribute to regional peace and stability. Yomiuri wrote, “In order to further strengthen the Japan-U.S. alliance, Japan itself needs to play a greater role.” It added: “The hypersonic weapons and new types of missiles that fly on irregular trajectories, which China, Russia and North Korea are developing and deploying, are difficult to intercept with the current missile defense system. Japan and the United States urgently need to incorporate advanced technology into their equipment and drastically improve their response capabilities.”

On the other hand, Asahi wrote: “While we may need sufficient defenses to discourage China from taking actions that threaten the regional peace and stability, if we depend excessively on the military approach, the possibility of tensions rising instead and even triggering a contingency cannot be ruled out.” It also stated, “We cannot help but feel concerned that attempts to block China’s challenges by force might only lead to an escalation of countermeasures.”

The Mainichi Shimbun stated: “The U.S. cannot oppose China on its own. It is working to strengthen its partnerships with allies and friendly countries that share the same values on human rights, the rule of law, and other issues.” It also made a request regarding Japan’s intention to consider acquiring capabilities to attack enemy bases expressed to the U.S., saying: “Given Japan’s exclusively defense-oriented policy principle, the issue should be considered with circumspection. Japan must not chip away at this principle and forge ahead without public understanding.”

On Jan. 6, a day before the two-plus-two meeting began, Prime Minister Kishida held a teleconference with his Australian counterpart, Scott Morrison. The Nikkei commented on the trilateral cooperation on China between Japan, the U.S., and Australia by summing up the two diplomatic events involving the prime minister and Cabinet ministers. It underscored: “The U.S. and Japan, while strengthening their bilateral alliance, should bolster multilateral cooperation as well. Fortifying the ties among Japan, the U.S. and Australia—countries that value freedom and democracy—will enable the Quad, which consists of those three nations plus India, to function more smoothly.”

At the very beginning of this year, North Korea repeatedly fired ballistic missiles toward the Sea of Japan, ignoring the international community’s attempts to stop it from doing so. The security environment surrounding Japan is visibly worsening. Japan urgently needs to improve its defense system.

METI to include hydrogen and ammonia promotion in clean energy strategy