WASHINGTON — Hsiao Bi-khim, Taiwan’s de facto ambassador to the U.S., told Nikkei in an interview that the island hopes to be part of a new Indo-Pacific economic framework that the Biden administration is developing.

“Only when democracies that respect international trade rules work together” can countries deal with Beijing’s economic coercion, the envoy said.

On security issues, Hsiao said that Taiwan takes the Chinese threat seriously, carefully analyzing both Beijing’s intentions and capabilities. Through a deep, broad and multifaceted relationship with the U.S., the island will fortify its self-defense capabilities, she said.

Born in Kobe, Japan, Hsiao served as adviser to National Security Council before becoming head of the Taipei Economic and Cultural Representative Office in the U.S., the island’s de facto embassy, in July 2020. A close confidant of President Tsai Ing-wen, Hsiao has been a central player in forming Taiwan’s foreign policy.

In January 2021, she attended the inauguration of President Joe Biden, becoming the first envoy from Taiwan to do so since the two sides cut diplomatic relations in 1979.

Q: It has been one year since you were invited to Biden’s inauguration. You also participated in Biden’s Summit for Democracy last month. In the global context, how important is it in maintaining a democratic government in Taiwan?

A: Democracy for Taiwan, today, is not only a value; it has strategic significance. And Taiwan’s democracy is one of several reasons why Taiwan is getting greater support from other democracies around the world. I appreciate that the Biden administration has highlighted Taiwan’s leadership in democracy, not only by inviting me to the inauguration about one year ago, and also the democracy summit, but also in supporting Taiwan’s meaningful participation in international organizations. 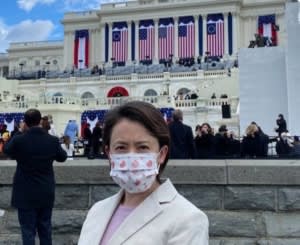 Hsiao attended the inauguration of U.S. President Joe Biden last January, the first Taiwanese envoy to do so since ties were cut in 1979. (Photo courtesy of the Taipei Economic and Cultural Representative Office)

At this particular time, our democracy is especially important in light of Hong Kong and the backsliding in democracy around our region. In light of the unfortunate evolution of events in Hong Kong, it’s all the more important that we stand strong in defending Taiwan’s hard-won freedoms and democracy.

We appreciate that support for Taiwan here in Washington is bipartisan — rock-solid support from the Biden administration, which we appreciate, but also from Republican members of Congress. It’s one of the few issues that there is a strong consensus and agreement on. That helps to provide a strong foundation for moving our partnership ahead in so many ways.

Q: The Beijing government looks increasingly coercive and is pressuring Taiwan, both militarily and economically. The former head of the U.S. Indo-Pacific Command, Adm. Philip Davidson, said last March that China could take military action against Taiwan within the next six years. How significant is the threat?

A: We take the Chinese threat seriously and we look at the threat from two dimensions: intentions and capabilities. Their intentions have been clear for a long time. They have refused to renounce the use of force to achieve their objectives.

But intentions are a dynamic process. It’s important that we also work together to deter those [intentions] so that realistic calculations of the potential negative consequences would figure into [China’s] calculations.

On capabilities, it’s also a dynamic process. It’s no secret that the Chinese have been investing tremendously in their military and new capabilities, including emerging technologies. That is why we are also prioritizing asymmetric capabilities. It’s essential that we are vigilant, and that we respond with absolute determination to defend Taiwan.

Q: The U.S. has maintained “strategic ambiguity” when it comes to defending Taiwan. Last November, President Tsai Ing-wen was asked by CNN whether she believed the U.S. would intervene in a Taiwan conflict. She said she has faith that it would.

A: Our security partnership is based on the foundation of the Taiwan Relations Act. The act is a very unique piece of [U.S.] legislation that no other country has as domestic law — supporting the cooperation and partnership between our countries. That is a very strong foundation that we continue to build on to ensure that the worst-case scenario doesn’t happen.

Our relationship with the United States is deep, it’s very broad. It is multifaceted, and we will continue our cooperation in the important areas that will help fortify Taiwan’s self-defense.

Q: There are many progressives in America who, along with the younger generation, do not support U.S. military interventions overseas. As Taiwan’s de facto ambassador to the U.S., how would you make the case to the American people that the defense of Taiwan is in the U.S. interest?

A: Historically we’ve never had a majority of people who actually want war. Most people share the Taiwanese people’s view that we want the issue, the matter, to be resolved peacefully.

Q: The U.S. and Japan will have a virtual summit later this month. Taiwan will be one major topic of discussion. What is your assessment of Japan’s role in maintaining peace and stability in the Taiwan Strait?

A: Japan is one of our closest neighbors and we share an interest in the stability and prosperity of the region. Based on those shared interests, it’s important that Japan continues, as stated in the various summit and two-plus-two statements, underscoring the importance of stability in the region, and be[ing] supportive of global deterrence against any military action. 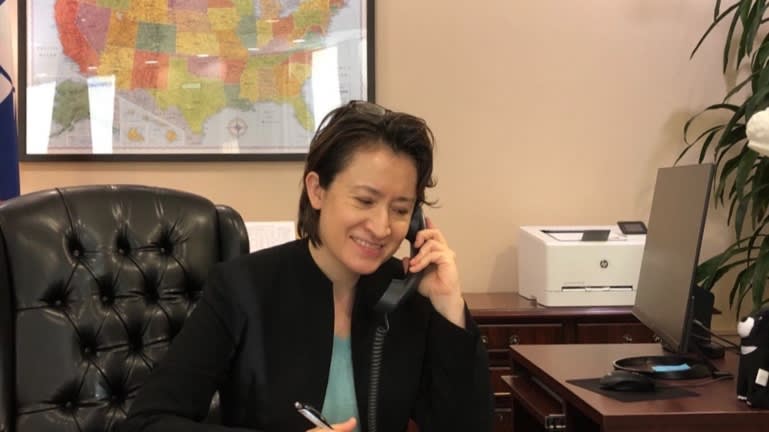 Q: Let’s turn to the economy. What are the most important next steps for economic cooperation with the U.S., Japan and other countries?

A: The next steps would be trying to get some progress in bilateral trade agreements, and also Taiwan’s participation in regional multilateral economic arrangements like the CPTPP (Comprehensive and Progressive Agreement for Trans-Pacific Partnership).

We have submitted our application to CPTPP and we hope that Japan and other leading economies in the region will also be open and supportive of that.

There is some discussion of an Indo-Pacific economic framework. That is in the process of being conceptualized. We hope that this is a framework that is inclusive of Taiwan, especially in light of the important role that Taiwan plays in supply chain security. It’s only when democracies that respect international trade rules work together [that] we can, together and collectively, deal with some of the economic coercion, the manipulation of economic leverage by China, to try to influence policies of some governments.

In recent years, Japan, Australia, South Korea, have all suffered, at different levels, and different points in time, some degree of economic coercion. In Europe, Lithuania, the Czech Republic, have also encountered this. It’s all the more important that democracies cooperate and work together, to strengthen our ties in a way that we are less vulnerable to Chinese economic coercion.

We have indicated an interest to be part of any regional economic initiative, and again, given Taiwan’s important role in technology and in so many other areas, we believe that inclusion of Taiwan will benefit all parties involved in such an initiative.

With regard to CPTPP, Japan’s leadership is extremely important and we do hope that Japan will be supportive of Taiwan’s application.

Cartoon: A cynical view of IPEF