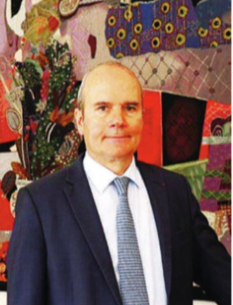 France’s ambassador for the Indo-Pacific Christophe Penot of the nation’s Ministry for Europe and Foreign Affairs gave a written interview to the Sankei Shimbun on Jan. 13. France will assume the EU presidency this month, and the ambassador revealed that he intends to seek the joint deployment of vessels by EU member states to the Indo-Pacific region.

Last year, France, the UK, Germany, and the Netherlands each sent ships to the Indo-Pacific region to conduct joint exercises with Japan and the U.S. Referring to the EU’s announcement of its first Indo-Pacific strategy last September, Penot said that the dispatch of ships “should be a joint deployment, and France is ready to work with European countries to achieve that.”

The EU presidency rotates every six months, and France’s goal is to adopt a “strategic compass,” the EU’s security guidelines, during the first half of the year. “Maritime security is a key issue,” said Penot. “We will need to expand our naval deployment in key areas, and naturally the Indo-Pacific will be one of them.” In this way, the ambassador suggested that EU member states may become more active in dispatching vessels.

Referring to the launch of the AUKUS security framework among the U.S., the UK, and Australia last September, Penot said, “The roles of the EU and France were not taken into account, and this undermined trust.” In this way, the ambassador justified the French government’s protest against the cancellation of the submarine development contract with Australia. He then stated that France’s analysis of the regional situation [in the Indo-Pacific] is “in line with that of the countries participating in AUKUS” and asserted that France is ready to work on repairing ties with the U.S. and Australia.

Regarding the situation in the South Pacific surrounding the French overseas territory of New Caledonia, Penot expressed alarm, saying that China’s aid to the island nations is leading to the creation of a “debt trap.” The ambassador stated, “In the case of China’s aid, a country receiving the loan becomes more dependent on China and the PRC takes advantage it, using it for Chinese political purposes.” In this way, the ambassador suggested that another option needs to be presented.