MOSCOW — Trade between China and Russia is reaching new highs as friction with the West brings the countries closer.

Turnover between China and Russia reached a record $146.88 billion in 2021, up 35.8% from the previous year, according to recent data from China’s General Administration of Customs. Although Moscow had yet to release its own final estimate as of publication, its trade representative to China, Alexey Dakhnovsky, told the state RIA-Novosti news agency earlier this month that the figure was indeed expected to have exceeded $140 billion.

Next month, Russian President Vladimir Putin is set to attend the opening ceremony of the Winter Olympics in Beijing and meet with Chinese President Xi Jinping. The leaders are expected to sign a number of high-profile political and economic deals, potentially including a final contract for the Power of Siberia-2 natural gas pipeline.

Analysts say the standoff between Russia and the West over Ukraine, which could bring new sanctions against Moscow, is likely to tighten the Kremlin’s bond with Beijing even more.

Artyom Lukin, a professor of international relations at Russia’s Far Eastern Federal University, told Nikkei Asia that Russian officials were likely consulting with Chinese counterparts about how to mitigate the potential impact of new Western penalties. The Kremlin’s current assertiveness, he argued, indicates that Moscow has some confidence it can rely on Beijing for support.

“I think Putin likely received some guarantees from Xi that if a crisis erupts over Ukraine and the West imposes major sanctions against Russia, then China will stand shoulder to shoulder with Russia,” Lukin said.

Over the past decade, Moscow and Beijing have sought to supplement political ties with greater economic cooperation. Trade between the two countries has increased by 167% since 2010, with the most significant growth in the past few years. The increase in trade was aided by a series of energy mega projects, such as the $55 billion Power of Siberia-1 natural gas pipeline, the $25 billion Eastern Siberia-Pacific Ocean Pipeline and the $13 billion Amur gas processing plant. Russia and China have vowed to raise their trade turnover to $200 billion by 2024. Recent economic trends alone suggest the countries are likely to reach that goal, according to Chris Devonshire-Ellis, founding partner of Dezan Shira & Associates, an advisory firm that works with investors across Asia.

But Devonshire-Ellis predicted that rising geopolitical tensions would add momentum to this effort by making stronger trade ties with China a necessity for the Kremlin. “If further trade sanctions are placed on Russia, Moscow will need to increase Russia’s sourcing capabilities elsewhere, with China being one avenue,” he said.

That’s no abstract possibility. In recent weeks, both the U.S. and the European Union have threatened new sanctions against Russia due to Moscow’s reported buildup of over 100,000 troops and heavy equipment near Ukraine. The Joe Biden administration has expressed concern that the mass deployment is a sign Russia is preparing to invade its neighbor sometime over the next month.

President Biden this week said he thought Russia would “move in” on Ukraine, and that it would “pay a stiff price, immediately, near term, medium term and long term.”

The Kremlin denies its maneuvers are anything more than standard military drills. At the same time, Russia has pushed for the U.S. and NATO to provide it with “legally binding security guarantees” that the alliance would not admit Ukraine as a member and would withdraw all of its military infrastructure back to the positions it held in 1997, the year Russia and NATO signed an agreement on relations.

During a defense board meeting at the end of last month, Putin warned that Russia was prepared to take “military-technical” measures if the West refused to meet its demands.

This month, U.S. Senate Democrats, with support from the White House, introduced legislation that would impose sweeping sanctions on Russia if it invades Ukraine. The proposed bill calls for sanctions against Putin and other senior Russian officials, a dozen of the country’s largest banks, Russia’s sovereign debt, and its Nord Stream-2 natural gas pipeline to Germany.

The Biden administration has also threatened to adopt export control measures that would cut Russia’s access to U.S. technologies and key components.

Separately, EU foreign ministers warned Moscow last Friday that the bloc would pursue a “robust” response to any Russian military intervention in Ukraine.

First, Russia would need to work out a plan for processing cross-border payments with China in the event that Moscow is blocked from the Belgium-based SWIFT international banking system. Second, Russia could replace some Western high-tech products with Chinese substitutes.

“Obviously China cannot replace everything, but in many areas China offers a serious alternative to Western products,” he said. “If sanctions are instituted, Russia won’t have any other choice but to expand trade with China — even if Chinese products in certain areas have a higher price and lower quality.” 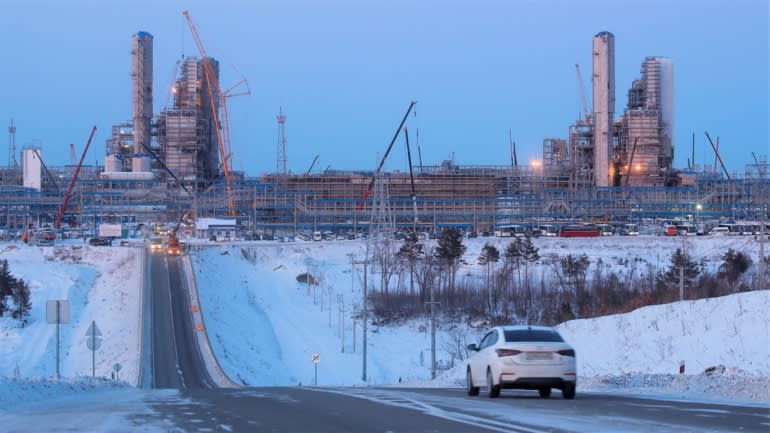 That is not the only potential downside. While pivoting to China could help provide Russia with relief, it could also risk exacerbating the economic imbalance between the two countries. In 2021, China accounted for roughly 18% of Russia’s overall trade turnover, making it Moscow’s top partner for over a decade. By contrast, Russia’s share of China’s $6.51 trillion trade turnover amounted to just over 2%.

Still, Lukin challenged the notion that Russia’s growing economic reliance on China would necessarily lead to Moscow sacrificing its foreign policy independence. He noted that although Russia’s trade with EU countries has hovered around 40% of the total in recent years, that has not pushed the Kremlin to pursue a more conciliatory approach toward the West.

Moreover, he argued that China’s own tensions with the U.S. and its allies meant that Russia’s importance as a trade partner for Beijing would likely increase, too.

“Unless we see an absolute collapse of the Russian economy, I don’t think Russia will become a political satellite of China,” Lukin said. “There is definitely a connection between economic and political dependence, but the line is not so straightforward and [the political dependence] won’t manifest itself immediately.”