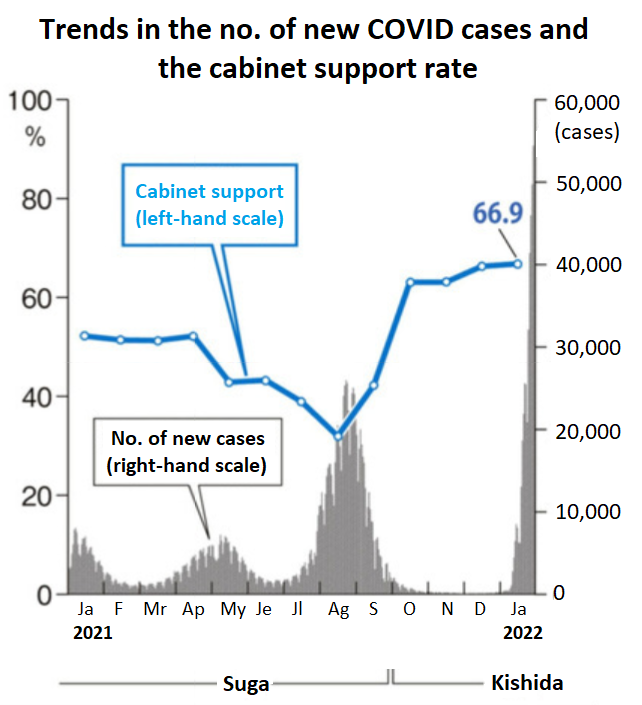 According to a joint public opinion poll conducted by the Sankei Shimbun and the Fuji News Network (FNN) on Jan. 22–23, the Kishida Cabinet continued to have a high rate of support (66.9%) even as COVID cases set new highs every day. This is the opposite experience from that of the Suga Cabinet, whose support dropped whenever COVID numbers rose. Although it appears that the public is responding favorably to Kishida’s ad hoc policy measures, approval of his handling of COVID dropped in the recent poll by more than 10 percentage points from the December poll. Kishida is on unstable ground.

The Prime Minister’s flexible stance has won for his cabinet favor among opposition party supporters. In the January poll, 52.2% of CDPJ supporters said that they support the Kishida Cabinet.

An LDP heavyweight among others say that the Prime Minister has a high support rate but that “the high support rate will not translate into actual votes. We can win [this summer’s Upper House] election if we firm up our standing with the conservative supporters.” The Upper House election to be held in half a year’s time will affect whether the Kishida administration will remain in office. With this election on the horizon, Prime Minister Kishida needs to implement policies that will win over the conservative supporters who form the core of his base. (Abridged)