TOKYO — Cramped restaurants can reduce the risk of omicron infection by two-thirds using such measures as ventilation and protective barriers, according to numbers crunched by Fugaku, the world’s fastest supercomputer.

The model looked at conditions inside an eatery with a capacity of 16 diners. In that setting, there is a 6.8% chance of an omicron-infected person speaking loudly for 30 minutes passing the virus to other diners who linger for an hour when only legal standard ventilation is used, according to the Fugaku projection.

However, the chance of infection is lowered to about 5.2% if additional air conditioning is used. The risk drops even further to about 2% when kitchen exhaust fans and dividers between patrons are in place.

“Masking up, using ventilation and other basic preventive measures at restaurants are still important,” said Tetsuya Mizutani, a coronavirus expert at the Tokyo University of Agriculture and Technology. 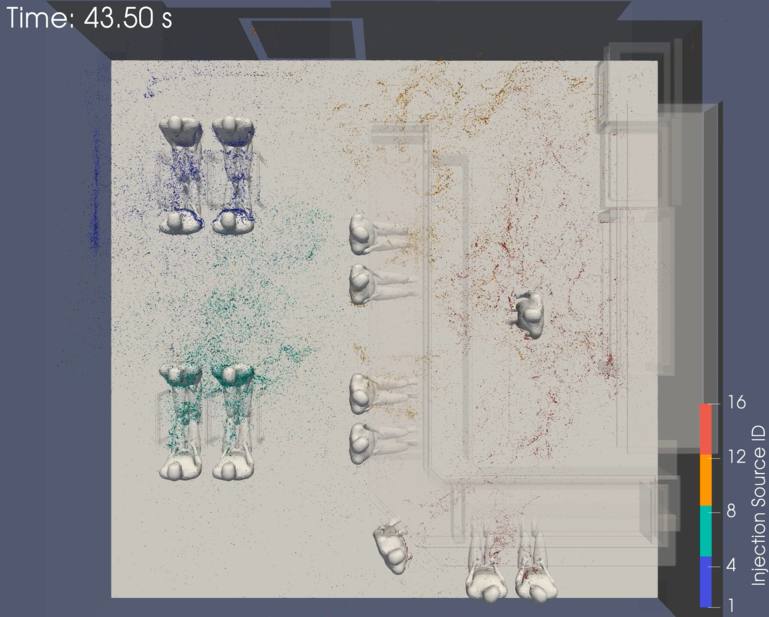 Fugaku simulated the spread of the omicron variant at a karaoke venue. (Image courtesy of Riken and Kobe University)

The Fugaku model also simulated infections at a karaoke establishment. If nine people, including one person with omicron, sing together for one hour in a private room, about 3.3 people would be also become infected. Only one person will likely become infected if the group takes turns singing one at a time. If the person who sings sits right below a ventilator fan, the case of new infection goes further down to 0.5.

Researchers also checked the chance of infection while talking. When people stay 1 meter away from a masked omicron-infected person for 15 minutes, the average risk is almost zero. But the chance increased when they are within 50 cm of an infected person.

“The risk is limited at school during classes because social distancing is maintained, but the risk increases during recess when students talk to friends. It’s important to go back to basics and think about the duration and proximity of contact,” said Makoto Tsubokura, a specialist in computational fluid dynamics at Kobe University who led the simulation team.

The computer model used the amount of respiratory droplets as well as the assumed viral load in such droplets based on past studies. For this model, the omicron variant was deemed to be 1.5 times more contagious than the delta strain.