TOKYO — China accounts for a larger share of imports in Japan than in other major economies, heightening the risk posed by supply chain disruptions there, a report released Thursday by the Japanese government warned.

The latest edition of the Cabinet Office’s twice-yearly World Economic Trends report looked at Japanese, American and German goods trade with China. Japan got 23.3% of its imports from China in 2019, compared with 18.1% in the U.S. and 8.5% in Germany, the data shows.

This trend also extends to the range of goods for which Japan is particularly dependent on Chinese sources. Of the 5,000 or so items examined, China accounted for at least half of imports by value for 1,133 in Japan, 590 in the U.S. and 250 in Germany.

The data provides further fodder for the recent focus on economic security in Tokyo, Washington and elsewhere as the COVID-19 pandemic has demonstrated how disruptive supply chain problems can be.

The report shows a less lopsided distribution of import sources for the other two major economies. America relies on neighboring Canada and Mexico for many products, while European Union member Germany sources goods from across the bloc.

Japan’s reliance on Chinese imports extends across a wide variety of goods, from light-emitting diodes to toys, but is particularly obvious in devices like smartphones and laptop computers. China’s share of handsets imported into Japan rose to 85.7% in 2019 from 69.1% a decade earlier, and the country gets nearly all its imported tablets and laptops — 98.8% — from China. 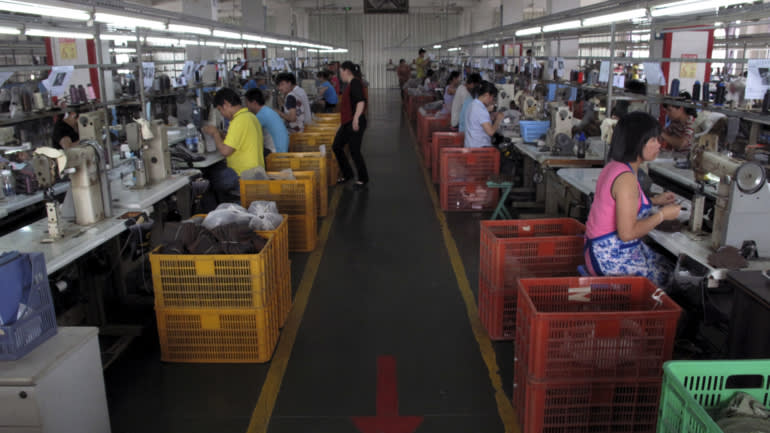 A shoe factory in Putian, China. When it comes to imported shoes, Japan is less reliant on Chinese footwear than it once was.   © Reuters

The makeup of China’s exports has shifted as the country’s economy has grown and developed.

Its share of Japanese imports of information technology devices and semiconductors has risen, while labor-intensive products have shifted to Vietnam, Indonesia and elsewhere in Southeast Asia as Chinese labor costs rise. Japan brought in 66% of its imported shoes from China in 2019, down from 91.7% in 2009.

The list of products for which Japan depends on China tilts toward such consumer goods as appliances, rather than materials like metals or industrial chemicals. Any disruption of exports from China would likely hit consumer spending harder than the manufacturing sector.

“In the event that exports from China are interrupted by a supply shock or shipping delays, it would be difficult for Japan to switch to other sources for many items … and the financial impact would be substantial,” the Cabinet Office warned.

The U.S. and European countries, taking lessons from the coronavirus turmoil, have been reworking their supply chains through an economic security lens, with steps such as promoting semiconductor manufacturing. Japan looks to bolster its supply networks as well, with legislation set to go before parliament this session.