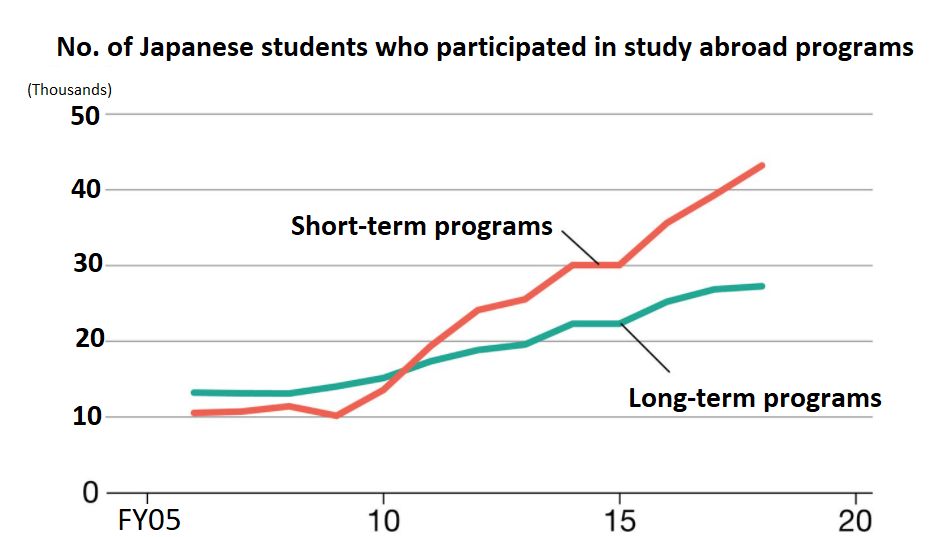 Note: Short-term programs refer to programs of less than one month and long-term programs to those of one month or longer. Source: JASSO annual surveys on Japanese students studying overseas

By Kato Maki; professor at Nagoya University Center for the Studies of Higher Education, and Kashima Ryohei; doctoral student at Hitotsubashi University Graduate School of Economics

Study abroad programs are popular among Japanese university students. Before the COVID-19 pandemic, the number of students who went overseas to study increased steadily. According to surveys conducted by the Japan Student Services Organization (JASSO), an independent administrative institution, the number of Japanese students who participated in study abroad programs reached 70,541 in fiscal 2018, which was before the pandemic. The figure was about 2.9 times higher than a decade earlier.

The high number is attributed to support from industry, academia, and government in addition to students’ desire to study abroad. JASSO offers scholarships to students who study overseas and the public-private “Tobitate! Ryugaku Japan” program was launched in 2014.

Not only Japan but also the U.S. and Europe are seeing more and more students taking part in short–term programs. The trend is believed to be attributable to the facts that short term programs (a) are cheaper than long–term programs, (b) offer destinations other than English-speaking countries and a diversity of program content, and (c) enable students to graduate from university without staying on an extra year.

The rise in the number of short-term program participants naturally begs the question, How effective are such programs? But there are few research papers that accurately address the effectiveness based on the relation of cause and effect. There are two reasons for that. The first is that the number of participants in a short–term program is small, 30 or fewer students. In other words, short-term programs are not suitable for data analysis.

The second is “selection bias” associated with the participation in study abroad programs. Namely, students who take part in the programs and those who do not possess different attributes. In the research of the effectiveness of studying abroad, it is known that the attributes are significantly different. Specifically, students who study abroad tend to belong to high socioeconomic strata, have highly educated parents, have traveled overseas before taking part in study abroad programs, major in liberal arts at university, get good grades, are mostly women, and are highly sociable.

Given these factors, the effectiveness of study abroad can be overestimated even though it was found, for example, that students who have taken part in study abroad programs earn more after graduation compared with those who have not, because many in the former group are likely to be willing to work and talented by nature. There were only a limited number of research projects that analyzed the causal effects of studying overseas by eliminating this bias. But in recent years the number of such projects is gradually increasing in the U.S. and Europe.

In these circumstances, the authors of this paper analyzed the causal effects of a short-term study abroad program offered by a Japanese university on the participants’ academic performance and initial career. Recently, more and more research projects study the effectiveness of study abroad on participants’ career after graduation. But to the best of the authors’ knowledge, there is no other research project that deals with short–term programs. However, what most characterizes the authors’ research is that the aforementioned study abroad programs chose participants randomly from among applicants.

The university has offered the one-month program to freshmen, sophomores, and juniors for the purpose of improving their language skills and cross-cultural understanding in English-speaking countries. In the winter of fiscal 2013 and the summer of fiscal 2014, a total of 705 students applied for the program and 300 students took part. By the way, the university implemented the program to determine the effectiveness of studying abroad. So the participation fees were set very low.

The analysis of the data of students who applied for the program found no difference in the final grade point average at the university between those who participated in the program and those who did not. But the former group was found to have higher English language skills (the score of English shown by TOEFL) and participated in long–term overseas study programs that lasted more than three months carried out by the university more frequently compared with the latter group. Also, there was no difference in initial salary between the two groups, but the former group was found to have been employed by companies whose sales and foreign capital ratio are high on average.

A detailed look at the employers of the students shows that the short-term program did not equally bring positive effects to all students. It showed that participation in the program decreased the probability of students getting jobs at companies in the lowest decile ranked by sales and led to their getting jobs at companies in the top decile ranked by sales, indicating a gap on average [in employment] between participants and non-participants. Similar results were obtained regarding foreign capital ratio.

However, it would be premature to conclude that “short–term programs will definitely improve participants’ English language skills” based on these results. The results of TOEFL tests conducted at least three to four months after their return to Japan were used to check their English language skills. So it is possible that the program participants may have enthusiastically studied English after returning to Japan. The same may be true for their careers after graduation.

Also, the authors of this paper used data from one highly selective (high deviation value) university as a sample for their research. Therefore, the results of this research do not necessarily apply to other universities. In this respect, the contribution of the authors’ research is limited.

COVID-19 has led to the diversification of short–term study abroad programs, making them online or a hybrid of online and in-person classes. Under such circumstances, students who are considering or choosing to take part in study abroad programs may want to know more about the level of effectiveness of each program.

For universities, too, the information regarding the effectiveness of study abroad will serve as basic information for analysis of how to support each program. (Slightly abridged)