The people’s “voice” on social media could give them the power to change political outcomes.

Last year, a bill to revise the Immigration Law was scrapped because of a public backlash against it. The Asahi Shimbun analyzed tweets on the bill to examine the impact of the people’s voice on politics.

Since the ruling parties achieved a stable majority in previous year’s Lower House election, the Kishida administration has been able to proceed with Diet deliberations according to plan.

Toward the end of the last ordinary session (under the former administration of Suga Yoshihide), in contrast, the lawmakers were having heated exchanges over the death of Wishma Sandamali (33), a Sri Lankan woman who died while detained at a Nagoya immigration facility.

In the end, the government and the ruling parties had to give up on voting on the revised immigration bill because of a surge of criticism and protests posted on social media sites.

At around the same time, many ruling party members were receiving fax messages that were critical of the Suga administration’s COVID-19 countermeasures. As the administration was gauging the timing for dissolving the Lower House, the cabinet’s approval rating dropped. “We have to seek a balance between the election and public opinion, so we should not press [for a vote on the bill],” a senior ruling party official said when the bill was abandoned.

Asahi analyzed the relationship between changes in public opinion over Wishma’s death and Diet deliberations through the number of tweets that included the word “immigration law revision” during a three-month period from Feb. 19, 2021, when the bill obtained cabinet approval, to the time the bill was withdrawn. 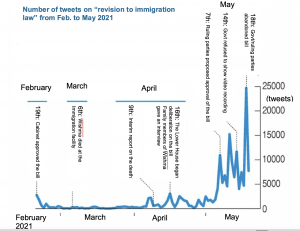 From February to April, about 600 such tweets were posted each day. The number increased to 4,000 by early March and peaked at 24,000 on May 18, when the bill was abandoned.

The most retweeted account was that of photojournalist Yasuda Natsuki, who specializes in reporting on refugee issues. Her April 30 tweet was retweeted more than 3,000 times.

“Please retweet if you like the post: A group of lawyers for Wishma, who died at the Nagoya immigration facility, are asking for your support. Tomorrow, the loved ones of Wishma—her sisters—will be arriving in Japan and will hold a funeral ceremony for her, I have learned. The truth must be uncovered even though the immigration authorities are doing everything they can to hide it. Her lawyers are thoroughly devoting themselves to the cause. We will support them.”

“Immediately after the incident, not many media outlets took up Wishma’s death and only a small number of people tweeted about it,” said Yasuda. “The turning point was when her family disclosed their names and showed their faces, sending out messages in their own voices. This put a human face on the immigration issue.” (Abridged)