In December 2021, the U.S. Embassy in Japan issued an alert to Americans living in Japan saying there had been reports of foreigners being questioned by police in suspected racial profiling incidents. The “racial profiling” suspected by the U.S. Embassy involves the linking of criminal tendencies with specific races and ethnic groups to conduct investigations. Racial profiling has become a social issue in the U.S. as an act of discrimination, mainly against Black people. People with foreign roots in Japan have been bothered by “frequent police questioning.” A fact-finding survey was recently launched. 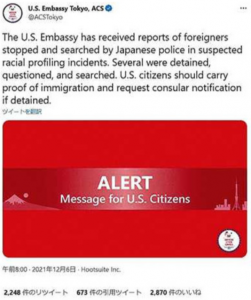 A 36-year-old male office worker in Tokyo who has roots in Japan and the United States says he has been questioned by the police more than thirty times. He says, “I’ve lived in Japan for a long time and pay taxes here, but I still feel alienated.” A police officer even made one of the worker’s friends take his or her socks off because the officer did not believe the friend was working, he says.

Hoshino Rene, a manga artist who came to Japan about 30 years ago from Cameroon, says, “Maintaining public security through police questioning is a good thing, but I would like the police to clearly state their standards.” According to the Police Duties Execution Law, police officers can question people when there is a reason to suspect abnormal behavior or criminal behavior. However, Hoshino says, “There was a period of time when I was stopped for questioning almost every time I passed a police officer.”

“It is detrimental for Japanese society to damage the dignity of dozens or hundreds of people to expose just one person,” says Hoshino.

A woman from South Asia sued the Tokyo Metropolitan Government last year because a Tokyo Metropolitan Police Department police officer questioned her and her daughter for an unreasonably long time over an incident in a park. Nishiyama Atsuko, an attorney for the woman, said, “It is an absolute fact that the incident was based on appearance. The incident didn’t get any attention due to her weak social position and language ability.”

A police officer said they “often question people who seem to frequent nightclubs” around stations and downtown areas in view of the prevalence of marijuana use among young people but also said that “foreigners are not particularly targeted.”

With regard to the U.S. Embassy alert, Chief Cabinet Secretary Matsuno Hirokazu denied [the allegations of racial profiling], saying “(police questioning) is not based on judgments of race or nationality.” The National Police Agency gave a similar explanation to Kyodo News and said: “We are conducting training on respect for human rights because we are engaged in duties closely related to human rights such as criminal investigations.”

In January 2022, the Tokyo Bar Association launched a survey regarding police questioning of people with foreign roots. The association has reportedly received more than 1,800 responses to date. Attorney Miyashita Moe commented, “Some incidents only give the impression that police officers equate ‘people who look like a foreigner and criminals’.” Miyashita says of the government’s denial [of the allegation], that “the numbers will reveal the reality.”

Showa Women’s University’s special lecturer Julian Keane pointed out that “although some may deny the allegation and say that the police are only doing their job, discourse that evades the issue has contributed to discrimination.”