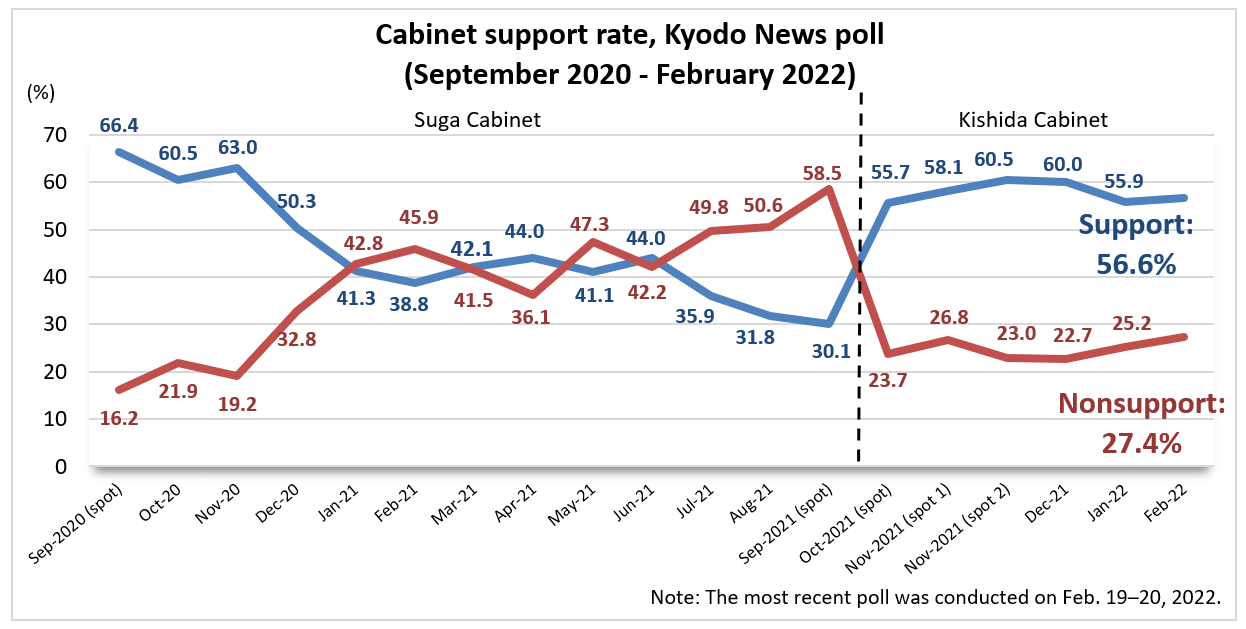 In the two-day telephone survey through Sunday on 1,054 eligible voters, the support rate rose slightly from 55.9 percent in the January survey, while the disapproval rating edged up 2.2 points to 27.4 percent.

While 54.1 percent of the respondents approve of his government’s overall handling of the coronavirus pandemic, down 0.3 point from January, 73.5 percent think the progress in the government’s booster shot program is slow.

Kishida has set a daily target of administering 1 million booster shots by the end of February and about 13 percent of the country’s population had received a third dose as of Friday, but the daily number of coronavirus deaths have been at record levels recently as the fast-spreading Omicron variant of the virus is posing high risks for the elderly despite the strain being considered less deadly for younger people than the Delta variant.

As for his plan to ease some border control measures in March, 45.7 percent believe the decision was too early, with 34.9 percent seeing it appropriate and 16.3 percent too late.

Kishida said Thursday the government will ease the entry ban on nonresident foreigners introduced in late November and effective through the end of February, raising the limit on new entrants to 5,000 per day from the current 3,500 and cutting the quarantine period for those arriving in Japan to zero to three days from seven days.

As for his domestic antivirus policies, 53.7 percent said the government’s extension of quasi-state of emergency measures in 17 of Japan’s 47 prefectures through early March was appropriate, and 30.2 percent wanted the measures to be upgraded to a state of emergency in some of the prefectures, the survey showed.

The extension of the antivirus steps allowing prefectural governors to request that restaurants and bars close early and stop serving alcohol is keeping 31 of the 47 prefectures under a quasi-emergency into March.