Interview: Joseph Yun: Biden’s best bet is to engage with N. Korea directly like Trump did 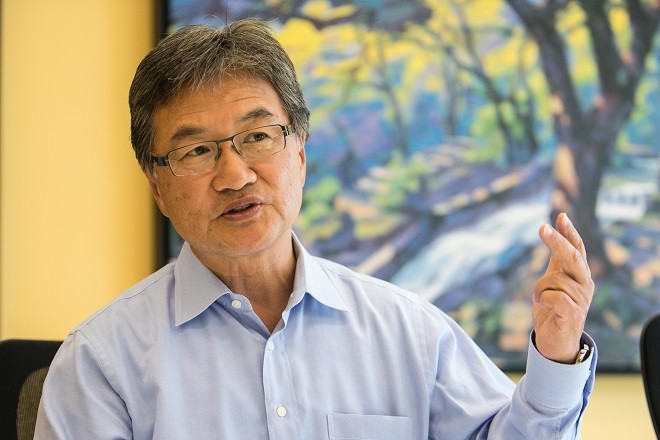 WASHINGTON–North Korea’s repeated ballistic missile launches illustrate that the dialogue-oriented policy line promoted by the Biden administration has reached a stalemate, contends one of America’s foremost experts on North Korea.

Joseph Yun, who served as U.S. Special Representative for North Korea Policy and was involved in negotiations with Pyongyang under both the Obama and Trump administrations, called for a more proactive policy engagement by top officials as well as President Joe Biden.

Yun said in an interview with The Asahi Shimbun that he thought the Biden administration’s “pragmatic approach” on North Korea needed to be reconsidered.

Question: What do you think was the purpose behind North Korea’s recent ballistic missile launches?

Yun: The No. 1 reason is that North Korea finds itself in a very difficult economic situation. They’ve been hit hard by the COVID-19 pandemic as you know, which has limited cross border movement of goods and services.

They’ve also been hit hard by a poor harvest and poor agricultural output throughout the year. And then another point is, of course, sanctions imposed by the United Nations through Security Council resolutions, as well as bilateral sanctions implemented by the United States and allies such as Japan, South Korea and others. So they’re in a very difficult situation.

And I do think they want to draw attention to the difficulties they’re having. The second reason is that they believe they are being ignored by the Biden administration, that the Biden administration has failed to really implement a new approach to the issue and find ways to engage with North Korea. As a result, they feel they are being ignored by the international community as well. So they want to attract some attention to that aspect.

Their third reason is, of course, to develop better weapons and better testing of various weapons, including cruise missiles, hypersonic missiles and missiles that have the ability to glide. Clearly, they are demonstrating growing technological development. So all those are reasons I believe they are testing them now.

Q: What are your thoughts about the timing of the ballistic missile launches? I was wondering if Pyongyang wanted to have some impact on the midterm elections this year.

A: No, I think they are sophisticated enough to know that they cannot affect midterm elections. American elections are not influenced by North Korean actions. It’s just not that important politically and domestically. But what is important is that a year has already passed since Joe Biden became president.

Early in Biden’s presidency, they recognized the Singapore agreement between Trump and Kim Jong Un, and so I think that gave some hope to Kim Jong Un and the regime that maybe greater pro-engagement policies would happen under Biden. But they’ve been disappointed. So I think they said we’ve given enough time for the Biden administration, but it has become what we call a backburner issue. So they want to make it once more a front burner partner issue.

Q: The Biden administration is now calling for a pragmatic approach to the problem. Do you think that will be effective to promote dialogue with North Korea?

A: No, it’s not effective to promote dialogue because we’ve seen that North Korea has rejected it. Biden’s pragmatic approach I believe is centered around “we will talk when you want to talk, but we’re not going to commit to anything, especially sanctions removal, before you show us what you’re prepared to do.” So it’s a very different approach than, say for example, the one taken by Trump, and it is much more similar, I would say, to Obama’s “strategic patience.”

Q: What should Washington do to overcome the frustration in order to promote dialogue?

A: For the North Koreans, what’s been very important is high level intervention. They experienced that during the Trump administration when Trump himself met with Kim Jong Un three times. So I would say that what Biden needs is a much higher level of engagement than the administration has been willing to do to date. It needs to show that very senior officials in the Biden administration are prepared to meet and get involved with North Korea. And so far, they’ve not shown that.

Certainly, one of them is humanitarian assistance and especially providing COVID-19 vaccines. And another thing is, for example, having a clear statement on the end of war declaration (concerning the 1950-53 Korean War). So I think all those are factors and their willingness to discuss sanctions for example. These are all factors that could lead to renewed dialogue.

Q: Looking back at the past 10 years under Kim Jong Un’s leadership, what are your thoughts?

A: Kim Jong Un came to power, as you say, 10 years ago after his father died. So really broadly speaking, his goals are two-fold: one is regime or dynastic survival. That is his No. 1 goal by far. His No. 2 goal is to have a strong and prosperous country, to ensure the welfare of his own people, his own country, that’s the second goal. But of course it comes below regime survival.

Outside, he has done that through weapons programs: nuclear weapons, missiles and other programs. And inside, he’s done that through the domestic security apparatus. So, he has succeeded in regime survival and he has made his own dynasty quite secure.

Now the question turns to how does it make his country stronger economically and more prosperous? And that’s the problem he’s having now. And he believes in order to do that, the sanctions have to be lifted, he has to get recognition from outside of normal trade and normal political relations.

And in order to do that, he must have security externally. So that’s the dilemma he’s in right now: Now that his regime is secure, how does he go about making the country stronger economically and more prosperous? It’s not achieved yet, it’s very far from being achieved.

Q: I would like to hear your perspective on the next 10 years due to your long years of service in government.

Q: So you mean Kim Jong Un will continue to negotiate with the United States and its allies?

So for example, he was prepared during the 2019 Hanoi summit to give up some nuclear capability in return for lifting sanctions. So ultimately, this is what negotiations will come down to.

How much can North Korea keep? How much should it give up? That is what the United States and Japan would be arguing for and in return for how much in benefits, including economic and political normalization. And so of course, the position now of the United States is they must give up everything. But it’s not going to work.

Q: Looking back to fall 2017, we had a really huge crisis on the Korean Peninsula with tensions at a very high level. Do you think we will be facing that again in the next 10 years?

I think there’s a good chance that there will be ICBM test, nuclear tests I’m not sure about because China gets very, very angry with nuclear tests. So right now, I think North Korea wants to make sure China is on its side, but conducting nuclear tests will maybe prove too much for China. But more missile tests, more ICBM tests is a definite possibility, yes.

Q: I was wondering what Japan should do to handle the crisis. Should Japan strengthen its defensive capabilities against ballistic missiles or seek a more diplomatic approach?

The third thing I think that Japan should do is create a diplomatic channel or line between Tokyo and Pyongyang. At the moment as far as I know, there is no communication between Japan and Pyongyang. Japan, as a major regional power, needs that communication and so they should spare no effort, no expense in creating a communications line with Pyongyang.

Q: The Japanese people are keenly interested in the Japanese abduction issue. Do you anticipate any developments on this front in the future?

A: I am not optimistic at all on the abduction issue. As far as North Koreans are concerned, they believe this issue is resolved. Kim Jong Il issued an apology when he met with Prime Minister Junichiro Koizumi and they returned some abductees. And so as far as they’re concerned, there is no issue and no more remaining abductees in North Korea. So to open this issue, it’s politically very, very difficult for North Korea.

It’s also very difficult for Japan not to open it, so my belief is that there has to be a multilateral approach on human rights issues in which the abduction issue becomes a part of a human rights agenda.