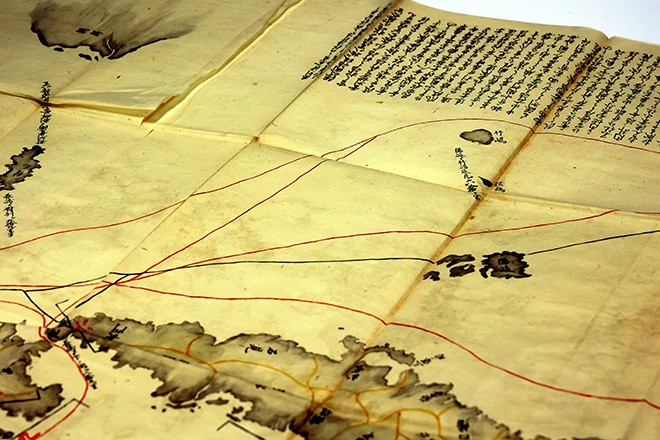 For the first time, an official map from the late Edo Period (1603-1867) was found that shows the now-disputed Takeshima islets as Japanese territory, a Japanese think tank said.

The navigational chart from two centuries ago was bought at a secondhand bookstore in Tokyo in October 2018 by Rikinobu Funasugi, an associate professor of history at Shimane University. 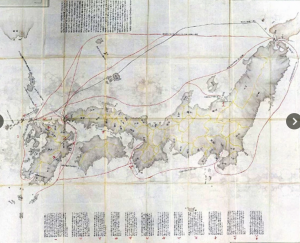 A navigational chart from the late Edo Period (1603-1867) shows the disputed Takeshima islets as Japanese territory. (Provided by the Japan Institute of International Affairs)

Funasugi was commissioned by the Japan Institute of International Affairs, a Tokyo-based think tank researching foreign and security issues, in 2018 to seek old maps showing the Takeshima isles.

Japan considers the Takeshima islets as part of Shimane Prefecture, but they are also claimed by South Korea, which calls them Dokdo.

The chart, measuring 102.5 centimeters by 137.5 cm, provides details of the smuggling of goods, mainly in the Kyushu region. It is believed to have been drafted in the 1820s to 1830s at the direction of a Nagasaki “bugyo” magistrate to crack down on such trade.

“The chart shows the shogunate had precise knowledge of Takeshima and considered the islets as Japan’s territory,” Funasugi said on Feb. 18. “The material carries great significance in studying (the country’s) sovereignty over the islands during the Edo Period.”

On the chart, present-day Takeshima is marked as Matsushima and present-day Ullung-do island in South Korea as Takeshima. It also shows a sea route linking Matsumae, a “konbu” kelp producing district in Hokkaido, with Nagasaki passing north of Ullung-do.

Notes written in the margin of the chart describe Takeshima (Matsushima) as small rocky islands with no vegetation.

The notes also say Nagasaki-bound ships carrying konbu began using the route that passes near Takeshima and Ullung-do because it is more convenient and less likely to be affected by winds and waves.