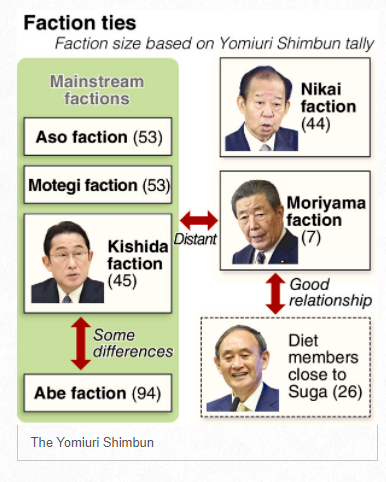 Former Prime Minister Yoshihide Suga’s standing in the Liberal Democratic Party appears to be on the up, amid a revaluation of his efforts during his premiership, such as the COVID-19 vaccine rollout.

He has maintained strong ties with Komeito and Nippon Ishin no Kai (Japan Innovation Party, Ishin) and some LDP members think he might launch his own faction with lawmakers close to him in preparation for a leadership struggle.

At a meeting of a group of LDP lawmakers led by the party’s former secretary general Akira Amari on Tuesday, Seiko Noda, the minister in charge of measures for the low birthrate, hailed the fact that public insurance will cover fertility treatment from April.

“Under the Suga administration, we were able to accomplish a historic reform,” Noda said, regarding the policy, which the former prime minister pledged to achieve in the LDP leadership race he won in 2020.

When he launched his administration, he paved the way for relevant discussions to be made toward the realization of the policy.

“I hope it will be easier for everyone to receive treatment and have their wishes fulfilled,” Suga said in a tweet posted on Feb. 9 that has received more than 170,000 likes.

There have been complaints about the slow booster rollout under the administration of Prime Minister Fumio Kishida, with some contrasting his efforts with those of his predecessor, who achieved the target of getting 1 million doses administered per day.

Suga touted his legacy achievements in a speech in Kaga, Ishikawa Prefecture, on Feb. 12, stating his administration was “able to prevent 100,000 infections and more than 8,000 deaths.”

Since last December, he has been ramping up his political activities, giving interviews and appearing on TV.

Since the Kishida Cabinet was inaugurated, the LDP’s relations with Komeito have cooled over reciprocal endorsement of candidates for the House of Councillors election slated for summer.

Meanwhile, Ishin, whose stance toward administration is adopted issue-by-issue basis, has been increasingly critical of the Kishida administration.

As Suga has links to both parties, expectations are high that he will be able to mend ties.

Suga is on close terms with Hiroshi Sato, vice president of Soka Gakkai, the lay Buddhist organization that backs Komeito. He also has a relationship with Osaka Mayor Ichiro Matsui, the leader of Ishin.

Hiroto Izumi, a former advisor to the prime minister in the cabinets of Abe and Suga, became a special advisor to both the prefectural and city governments of Osaka in December, “proof the relations between Suga and Ishin have not been severed,” according to an LDP source.

Suga, who does not belong to any party faction, has kept his distance from Kishida, but he has a good relationship with Toshihiro Nikai, a former LDP secretary general who leads the LDP’s fifth-largest faction, with 44 members. Suga is also on good terms with Hiroshi Moriyama, executive acting chairperson of the party’s General Council and leader of the sixth-largest faction, with 7 members.

In the LDP, speculation is swirling that Suga might launch his own faction, but the former prime minister played down rumors in a TV program last month, claiming he has “always been negative” about such a move.

Former Internal Affairs and Communications Minister Tsutomu Sato, a member of the faction led by LDP Vice President Taro Aso, is close to Suga and rumored to be plotting his departure from the Aso faction.

Sato had lunch with Moriyama at a restaurant near the Diet on Tuesday.

However, fresh in the minds of LDP lawmakers is the fact that Suga lost public support during his leadership due to the lack of explanations regarding the nation’s pandemic response. Suga might need a bit more time to completely dispel that negative image.