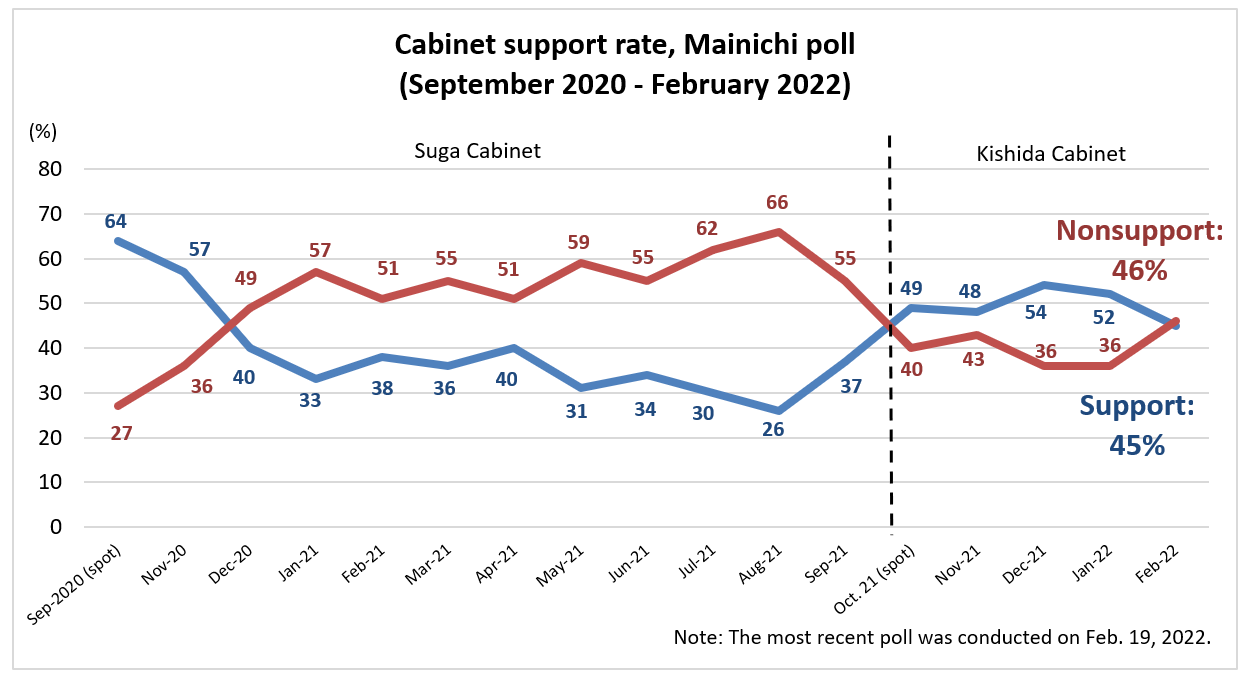 The approval rating of Prime Minister Kishida Fumio’s Cabinet was 45% in a nationwide opinion poll conducted Feb. 19, down 7 percentage points from the 52% found in the previous survey carried out on Jan. 22, 2022. This is the lowest support rate for Kishida since he took office in October last year. The poll, conducted jointly by the Mainichi Shimbun and the Social Survey Research Center, showed the disapproval rating for the Kishida Cabinet at 46%, up 10 points from the previous survey figure of 36%. The support and nonsupport rates for the Cabinet are almost the same.

Approval for the Kishida administration’s COVID-19 measures decreased to 27% from 31% in the previous poll and was greatly outdistanced by those who do not think highly of the government’s efforts who made up 51% of all pollees, up from 39% in the January survey. Japan’s sixth wave of COVID has become prolonged, as witnessed by the government’s extension on Feb. 18 of the quasi-state of emergency in 17 prefectures, including Osaka. It looks like dissatisfaction with the government has led to the drop in Cabinet support.

Asked whether the restrictions in the quasi-state of emergency should be strengthened further, however, only 28% said that they should be, well below the 40% who said the measures should be eased. Meanwhile, 26% said the “measures are fine as they are.” Thus, many are calling for restrictions to be eased, perhaps because, although the Omicron variant is very contagious, there is a lower risk of serious illness than with other variants.

Some 63% of respondents said that Japan’s rollout of booster shots is slow, while only 29% said it was not slow. By age group, the percentage of those age 18 to 49 who thought the rollout was slow was in the 50% range, while that figure exceeded 70% for those age 60 or over. Prime Minister Kishida has set the goal of administering 1 million shots a day, but there is a chance that the delay in getting the third shots out is another factor pushing down the Cabinet support rate.

A full 46% of respondents said that they would like to see as many children age 5 to 11 as possible be vaccinated, while 27% of pollees said that only those children at high risk of developing a serious illness from COVID should be vaccinated. Some 13% said there is no need to vaccinate children in this age group.

Regarding the third coronavirus vaccine “booster” shots, 56% answered that they would like to promptly receive one (61% in the previous poll), while 17% reported they have already received their booster shots (3%). Another 17% of respondents said they did not want to immediately receive the vaccine (21%), and 5% said they had not yet received two doses of the vaccine (6%).