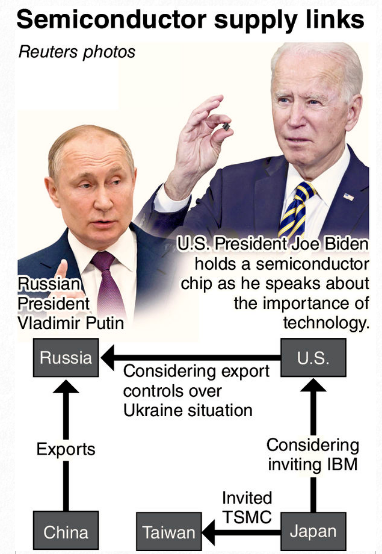 Amid China’s growing presence in both the military and economic fields, Prime Minister Fumio Kishida is concerned that Japan has too many vulnerabilities in areas including the protection of vital information and supply networks, and the Japanese government is expediting efforts to pass an “economic security promotion law.” This is the second installment in a series that explores Japan’s vulnerabilities in such areas.

As military tension builds up over the situation in Ukraine, the administration of U.S. President Joe Biden has spoken of limiting semiconductor exports to Russia, to counter Moscow for increasing its troops in the border region.

In a conference call on Jan. 14., a senior official of the U.S. National Security Council (NSC) asked directors of the Semiconductor Industry Association (SIA) to prepare for unprecedented action against Russia if it invades Ukraine.

Members of the SIA include major companies such as Intel Corp.

“The NSC relayed in blunt and stark terms the gravity of the situation they are currently grappling with in Ukraine, noting that this is an extraordinary situation and potentially the worst cross border invasion to take place since WWII,” an SIA director said in a message sent to the members after the meeting, according to Reuters. “The NSC indicated that the administration is actively considering any and all options.”

“If export restrictions become a reality, it’ll be a big blow to Russia,” said a senior Japanese government official. “However, Moscow has already been expanding its supply of semiconductors from China in preparation for that crisis.”

With the accelerated digitization of society, semiconductors have come to be referred to as the “rice of industry.” In addition to home appliances and communications devices, they also support AI and many other advanced technologies installed in military systems. With a powerful supply chain, therefore, semiconductor technology can be used as a tool in diplomacy and security strategy, as the United States has done.

Japan once took the lead in the development of high-performance storage media through domestic manufacturers such as NEC Corp. and Toshiba Corp. Japan’s share of the global market exceeded 50% in 1988, but its presence in the industry has faded, with its share falling to 10% in 2019.

The novel coronavirus pandemic has highlighted the fragility of the semiconductor supply chain, as Japan relies on imports mainly from Taiwan and China for more than 60% of domestic demand.

Last September, a company employee in Tarumi Ward, Kobe, received a phone call from a construction company regarding his house, which was scheduled to be completed next month.

“We can’t have a water heater ready, so could we delay the house’s handover date by about a month?” said an apologetic official of Anju Home Co. in Nada Ward, Kobe.

Since last autumn, Anju Home President Munehisa Fukami has been receiving notices almost daily from manufacturers of devices such as water heaters and bathroom air conditioners about delays in equipment deliveries.

The ongoing pandemic has boosted global demand for semiconductors, making it difficult for many companies to procure them. The shortage has had enormous consequences, from manufacturing cuts for vehicles and game consoles to the suspended production of medical equipment.

Japanese companies have lagged behind in semiconductor production, largely because they were unable to make large-scale investments due to the prolonged recession following the collapse of the bubble economy. In the meantime, South Korea, Taiwan and China have been steadily nurturing domestic companies via massive subsidies and tax breaks.

■ Two birds with one stone

The Japanese government only recently made a move to secure a stable supply of semiconductors.

Following the enactment of related laws at an extraordinary Diet session last year, a fund was created to attract manufacturers to establish production bases in Japan for advanced semiconductors. A total of ¥617 billion was earmarked for the fund.

The first project to receive the subsidies will be a plant that major semiconductor contract manufacturer Taiwan Semiconductor Manufacturing Co. (TSMC) will build in Kumamoto Prefecture with a Sony Group Corp. subsidiary. The government is also inviting IBM to build a factory in Japan.

It aims to kill two birds with one stone by strengthening its domestic supply network as well as international competitiveness through cooperation with the United States and Taiwan. The government will also likely designate semiconductors as a specified important good under an economic security promotion bill to provide support for securing a stable supply.

However, with leading countries and Taiwan investing incomparably large amounts of money in this field, it is not easy for Japan to close the technology gap.

China has invested about ¥5 trillion from the central government’s development fund alone and is expected to become the world’s largest manufacturing base as early as 2030. In February, the U.S. House of Representatives passed a bill to invest about ¥6 trillion over five years in semiconductor-related projects.

The semiconductors to be produced at TSMC’s Kumamoto plant are expected to be in the 10-nanometer to 20-nanometer range, rather than those with a circuit line width of 7 nanometers or less (a nanometer is one-billionth of a meter). The manufacturing of these cutting-edge products is dominated by TSMC and South Korea’s Samsung Electronics Co.

However, the government plans to operate it only for about five years from the March launch.

At a preparatory meeting held in Fukuoka City on Feb. 7, some participants voiced concern, with one saying: “It’s not easy to foster human resources. I want [the government] to take more time to work on it, not just for five years.”

“Because money and human resources are both limited, it’s difficult to restore Japan’s status as a global leader in the semiconductor industry, without any funds, human resource development by the public and private sectors, or timely international cooperation,” an official of a domestic semiconductor maker said.