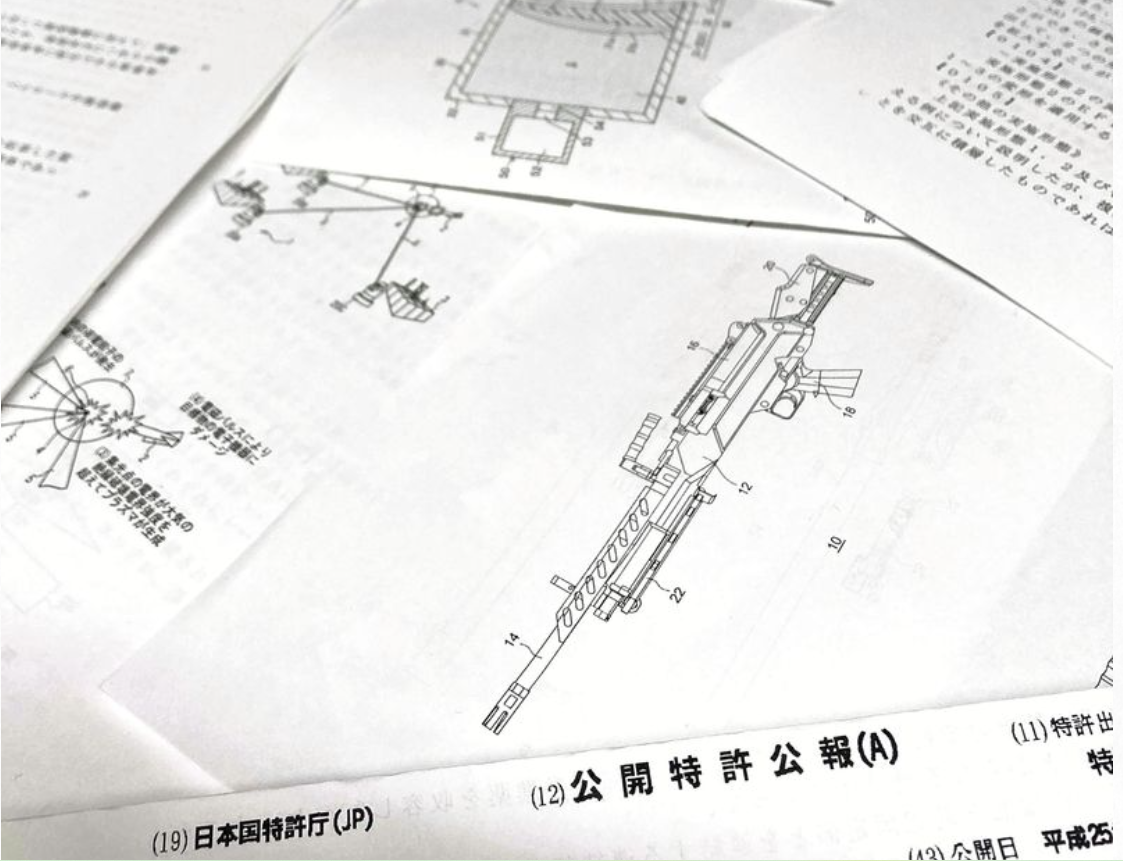 The Yomiuri Shimbun / Documents in the patent gazette provide free access to drawings and other information related to defense technology.

This is the seventh installment of a series exploring Japan’s vulnerabilities in areas such as information and supply networks, vulnerabilities that have prompted the government to expedite efforts to pass a law to protect economic security.

Japan’s patent system, which has been criticized for being too transparent, is finally about to change.

When a patent application is filed under the current system, the technology involved is made public 1½ years later in a so-called patent gazette, which can be freely viewed on the internet.

The government plans to keep certain applications private under the economic security promotion law, namely those connected to “inventions highly likely to create a situation in which the security of the nation and its people are harmed.”

Nuclear-related technology is expected to be kept secret, as well as technology related to state-of-the-art weaponry.

Secret patents used to be allowed in Japan, mainly for military-related technology. However, this practice was abolished through legal revisions in 1948, because it was deemed unnecessary under the post-World War II pacifist Constitution.

But since then, many world-leading defense-related technologies have been developed in Japan, and the need to review the system has been discussed for many years.

According to the Cabinet Secretariat, among the Group of 20 major economies, only Japan, Mexico and Argentina do not have a system to keep patent applications secret for national security reasons.

About 10 years ago, a defense-related company that had developed technology related to electromagnetic waves had a heated internal debate over a patent application.

One side argued that if the company filed for a patent, China and Russia would copy the technology. The other said that if it didn’t file, a U.S. or European company might eventually beat them to it. In the end, the company chose to apply for a patent.

An official of the company said, “We’ve been asking the government for a non-disclosure patent system, in which [developers’] rights are protected and information is not released, for a long time.”

An executive from another company that develops shooting-related defense equipment said it had similar concerns.

“As a citizen [of Japan] I worry that uniform disclosure could lead to technology being passed on to foreign countries, but this company has applied for patents,” the executive said.

A number of advanced technologies are explained in detail, with drawings attached, on the website of the patent gazette.

One such technology was related to a new warhead that the Defense Ministry envisions being installed in hypersonic weapons, which are difficult to intercept. The patent was applied for by Daikin Industries, Ltd. and published in June 2021. Another was related to electromagnetic pulses to disable electronic devices — it was applied for by Mitsubishi Heavy Industries, Ltd. and released in January 2017.

The United States, China, Russia, and North Korea are competing fiercely to develop and deploy hypersonic weapons. A large-scale electromagnetic pulse could paralyze an entire city.

A former official of the Japan Patent Office said, “In addition to referring to the technical information in the patent gazette, Chinese companies have created a database of the names of inventors and are using it for recruiting talents.”

Some members of the Japanese government are also concerned about the current situation. A senior official of the Cabinet Secretariat said, “A counterpart in another country sarcastically told me that the patent gazette is a ‘guidebook to the latest weapons.’”

“The introduction of non-disclosure came rather too late,” said Prof. Kazunari Sugimitsu of Kanazawa Institute of Technology, an expert on intellectual property strategy. “Making all defense technology public is like doing your enemy a special favor.”

In the new system to be introduced under the economic security promotion law, the examination of patent applications will be divided into two stages.

If there are no security concerns in the first round of screening conducted by the patent office, procedures will continue as before. If there are determined to be concerns, a “protection examination” will then take place.

Based on the opinions of experts and the Defense Ministry, and with the consent of the applicant, a “protection designation” will be made. While that designation is in force, the patenting process will be stopped and no public disclosure will be made.

Restrictions will be placed on applicants during the designation period, prohibiting them from filing patent applications in other countries and requiring them to obtain government permission to commercialize the technology. Penalties of up to two years in prison will also be established for violations.

There will be no time limit on the length of the designation, and the government will decide every 12 months whether an extension is necessary.

The new system also includes a provision for the government to compensate applicants for their losses, but the specific amount has yet to be determined.

Within the government, some officials believe that only a small percentage of cases will actually be restricted from disclosure, probably less than 10 cases per year, due to the desire to preserve the freedom of business activities.

Participants in such meetings as the gathering of the ruling Liberal Democratic Party’s economic security task force on Feb. 10 acknowledged the necessity of the non-disclosure system, but also expressed concern over operational challenges.

Rui Matsukawa, a former parliamentary vice minister of the Defense Ministry, said: “It looks like it will only be a disadvantage to private companies. Without proper compensation, the system won’t function properly.”

The bill provides for a preparation period of two years or less after promulgation, before the system is implemented.

To make the new system effective, the detailed design that will take place after the bill is passed will be crucial.